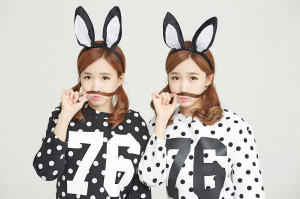 From the moment it was first announced that Crayon Pop’s twin members ChoA and Way would form a subunit called Strawberry Milk, it was clear that this would lead to rather unusual results.

Appearing first on the public radar with their hit single “Bar Bar Bar”, complete with outfits including motorbike helmets and similarly extraordinary fans in tow, Crayon Pop had already established itself as a group on the kookier side of the K-Pop spectrum.

With their debut, Strawberry Milk maintains the silliness of the Crayon Pop brand, and yet presents it in a slightly different way. For starters, their debut song “OK” from The 1st. Mini Album is much more in the realm of traditional pop than their repetitive, possibly march-music-influenced breakout hit “Bar Bar Bar”.

It also sounds greatly different from their latest release, trot extravaganza “Uh-ee”, but it does share one similarity: the inspiration from older music. “OK” is an aggressively sugary sweet love song, the quick pace and lively melody of which make it sound simultaneously timeless and dated.

This song about love for a gentlemanly and lovely boyfriend (though how much of a compliment is calling someone “so OK” really?) is fun to listen to and will set the listener’s toes a-tapping. Despite that, it should be mentioned that the song is in no way unique, which has been Crayon Pop’s strength so far. “OK” is a song that could just as well be found on an A Pink album, or maybe even among Secret’s discography in one of their cutesier moments.

This change from a bafflingly peculiar concept to one which is still quirky but with a fruity added bonus of overflowing cuteness is also reflected in Strawberry Milk’s MV. In concordance with their name, the domineering colors of the music video are numerous shades of pink. Among these, ChoA and Way jump around dressed up as various food-related items while directing an amount of aegyo at the camera that leaves the viewer speechless.

While adorable, this over-the-top cuteness and the food outfits are once again reminiscent of another currently active group: fellow subunit Orange Caramel. Comparisons between both groups have been drawn since the first teaser pictures of Strawberry Milk were revealed, and it seems like the fears of some might have been justified. 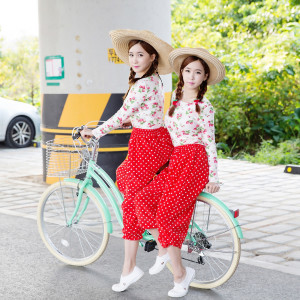 With the popping colors in their MV, the food theme, the high-pitched voices, and the quirky concept, Strawberry Milk really is entering a niche of the market which is already pretty well covered by Orange Caramel. What sets them apart is the ‘gimmick’ of ChoA and Way being twins, which is strongly emphasized in the music video. Both have the exact same hair color and frequently wear the same clothes, which makes it nearly impossible for a casual viewer to tell them apart.

With the pink castle background and the pigtails which both members sport, it also seems to be an explicit goal of the MV to present Strawberry Milk as innocently childish as possible. It is true that many girl groups are presented in such a way when they are promoting with a cute concept, but viewers will have to decide whether they are ‘OK’ with this concept in combination with the song’s romantic message or whether it bothers them.

All in all, Strawberry Milk’s “OK” gets 3.5 out of 5. If the audience enjoys energetic, pure girl group pop and the more and more popular ‘quirky-but-quaint’ concept which ChoA and Way present in this MV, then they will definitely be enchanted by the duo. But if they were hoping for the two members to continue with Crayon Pop’s creative, surprising approach to music then they might be disappointed. Strawberry Milk is peculiar, that much is true. But it is a kind of peculiar we have seen before.