As One Asks to Stay "For the Night" 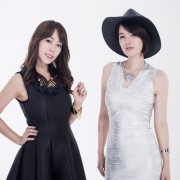 When it comes to mature concepts, many K-pop artists miss the mark completely while others get it close to right. Thankfully, the ladies of As One do the latter with “For the Night,” an R&B track reminiscent of ’90s soul. The sensual song gets an equally sexy treatment in a video that matches the maturity of this duo.

To be blunt, the song is about a one-night stand. It is easy for such material to become smut in the wrong hands, but the nature of this song never steers the listener towards the gutter. It remains light and mellow like a fine cognac by the fire. It hints at heat, adding to the peek-a-boo seduction of the song. The lyrics avoid slipping into “50 Shades of Sleaze” because the protagonist is openly inviting her partner to join in the lovemaking:

I think I’m ready to be with you
A day like today won’t come again
You shouldn’t worry about the time
Don’t try to ignore, come hurry and hug me baby

The soft percussive beat matches wonderfully with the gentle tones of As One’s voices, echoing their siren song. It is this kind of come-hither crooning that evokes a sensual mood in the listener. Sadly, it is a bit of a snoozer since there is little that is vocally dynamic in the delivery.

That is not to say it is bad, but lack of a climatic build avoids pushing the song far enough. Most R&B is about the slow buildup of chemistry that leads to an implosion of emotions that can no longer be contained in the end. This essential ingredient is missing from the song. Think of fireworks without the huge explosion; they’re still pretty to watch, but your heart knows something is off.

The video itself does a better job of expressing the song with its sex fantasy story line. Starring Jaewoong from Troy and fitness model Kim Hae-na, the MV portrays a scenario of Hae-na in the role of maid to Jaewoong’s businessman character. The flirtatious maid does her best to catch Jaewoong’s attention while cleaning his room. He sneaks a couple of peeks but is too focused on his work to reciprocate her coy advances. As she proceeds to clean other rooms, the maid finds herself unable to forget the handsome guest she saw, fantasizing about what a night with him would be like. Eventually, she takes matters into her own hands to make this reverie a reality.

The story line is a bit different from most in K-pop for the reason that it features a female protagonist being assertive in her advances. A lot of female groups will feign shyness in lieu of embracing their sensuality to avoid the ominous label of “slut” for vocalizing their sexual desires. This harmful propaganda cultivates an ideology that women are inherently frigid and never meant to seek sex for actual pleasure because doing so implies their behavior is unsavory.

This video throws such an outdated concept through the window by showing our protagonist taking measures to fulfill her personal desires. Using the classic lingerie under the trench coat technique, she approaches her love interest with a bottle of wine and a sexy offer he doesn’t refuse. At no point is she not in control of her sexuality because everything is done with clear deliberation.

“For the Night” serves us seduction from a very mature viewpoint. In an industry that constantly uses sex as a means to bump up exposure, this song and MV provide a reminder that intimacy should be about expressing passion more than desperation. No one needs to be objectified to fulfill a sexual fantasy, nor does anyone need to be vilified for vocalizing a desire for sex either. Everyone wins under this mindset.

All in all, this video was quite enjoyable and refreshing given the nature of its context. It was tastefully executed and matched the lyrics of the song. Hopefully, more groups will take on this example for the R&B genre.