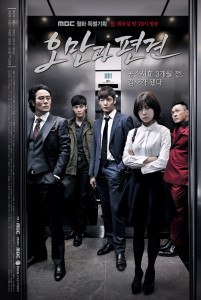 Even before it aired, Pride and Prejudice attracted much interest, albeit for a different reason than you might think. As some might know, there was quite a stir when Choi Min-soo — in a press conference for promoting Pride and Prejudice — showed his distaste for idol turned actors. The statement was quite glaring especially since sitting at the same table with him was his co-star 5urprise member Lee Tae-hwan. The statement sent netizens into overdrive, and a flurry of comments soon flooded online.

Sharing the same title as one of the literary classics, Jane Austen’s Pride and Prejudice, the drama has a big act to follow. It would be a mistake, however, to simply expect the drama to be the modern interpretation of the book. Actually, Pride and Prejudice drama shares very little similarities with Jane Austen’s novel. The characters are different, and the plot setting is also very different. Having said that, the book and the drama do have the same relative strength: both are relatable. At first glance, the book and the drama are just straightforward romantic stories. But peel away the skin, and we find layers of interesting characters that have complexity, maturity and charm that we all love and connect with.

At first glance, Pride and Prejudice seems to be just one of those typical legal dramas. You have a rookie prosecutor Han Yeol-moo (Baek Jin-hee) with her sense of justice and idealism wants to see criminals off the street. Then you have the ace prosecutor Koo Dong-chi (Choi Jin-hyuk); he shows that you need wit and talent to match your idealism. It is this clash of views that leads to much bickering. Cute as it may, we all have seen the same setup over and over in many dramas, haven’t we?

And, oh, don’t forget they also have a past relationship together, a recurring theme it seems, especially for Choi Jin-hyuk and his previous drama Emergency Couple.

But for what it lacks in originality, Pride and Prejudice more than makes up for with character depth. For example, the drama does well in fleshing out Han Yeol-moo’s emotion and motivation bit by bit. She is haunted by her brother’s unsolved death, which not only explains her drive to become a prosecutor but also lets her emotion separate from her smile. We see this when she casually tells Dong-chi that she is there to get revenge on him. It is also shown when she is visibly disinterested in dealing with cases that don’t put other people’s lives at risk. Only when the cases are personal to her — the child molester and child abuser cases — does she let all her emotions out. It is maybe a sign of that she is still struggling to come to terms with her loss, even though she really tries hard for it. Once again, it may not be one of the most imaginative characterizations, but it is still enough to get us engaged. 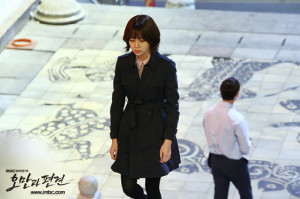 Koo Dong-chi’s character at the first four episodes hasn’t yet shown as much depth as that of Han Yeol-moo, but there are already signs that we should question his smiling ace aura. Is justice really his only motivation as a prosecutor? What did he use to pressure chief prosecutor Moon Hee-man (Choi Min-soo) to re-investigate the child abuser case? Did he really have something to do with Han Yeol-moo’s brother death? There are many questions still left unanswered for Dong-chi, and I am very curious to know the answers. It is also fascinating to find out how he will overcome Han Yeol-moo’s prejudice and rekindle their love once again.

Baek Jin-hee and Choi Jin-hyuk have my appreciation for their commendable performance; their chemistry is especially great. But what makes Pride and Prejudice stand out from the rest of the pack is the supporting characters. Choi Min-soo’s portrayal of eccentric chief Moon Hee-man deserves a fair amount of recognition. He makes this otherwise cliched story have more color with his funny antics. I really like how he acts in the small details, such as the golf motion or the alcohol bomb, and the way he talks about something totally unrelated to arrive to his point. He is the kind of unsentimental and funny-in-a-weird-way character that seems to be missing in recent dramas.

Another high point is how the totally unexpected chemistry between investigator Kang Soo (Lee Tae-hwan) and criminal Jung Chang-gi (Song Chang-Min) blossoms throughout each episode. It was a weird pairing at first, but I found myself pleased to see these two character form a brotherhood type of friendship that is sweet and endearing. It was also of particular surprise for me to discover that Lee Tae-hwan actually isn’t a bad actor at all, bearing in mind what Choi Min-soo said in the press conference. His stiffness and awkwardness seem to be original and quite funny.

The drama has shown in the first four episodes that it is down to earth, not being too clever or too extravagant for its own good. The cases are major themes in our daily lives, the characters feel truly derived from real people, and the conflicts are believable. That also may explain why the ratings are doing quite well. Pride and Prejudice‘s fourth episode was ranked first in its time slot with 12.6% compared to other dramas. It’s a good start.

Well, let’s just hope the show can maintain its momentum or even thrive in the next episodes. Let’s drink to that, shall we?