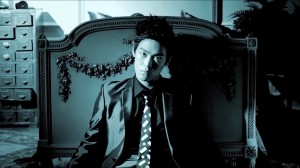 A haunting piano melody resounds. Illuminated by harsh lighting, a young man cocks his head as he stares relentlessly into the camera. The movement seems barely human, an impression underlined by his unchanging expression.

Can this be him, the viewer may asks themself — the same young man who strolled around pastel-colored sets just 14 months ago, fumbling to declare his love to his “Baby“? The same wide-eyed, amiable babo who quietly worked his way into some of the most popular variety shows in South Korea over the course of the last year?

Indeed, John Park has returned to the music scene; and what a return it is. His new song “U”, described as a “soul-based UK pop-style song”, certainly adds a new sound to this year’s diverse releases. It presents us with the artist as we’ve never seen him before. A few songs on Park’s first full album Inner Child already have a soul-influenced sound, but “U” stands in stark contrast to his previous singles “Falling” and “Baby”.

First of all, there is the change from a guitar-heavy sound to the aforementioned distinctive piano during the verses, and the apparent use of diverse percussion instruments during the chorus. The overwhelming sound created by these different main instruments, as well as the potential use of a reverberating effect, evokes a stadium feel that no doubt led to “U” being recognized as sounding like UK pop. John Park’s deep, captivating voice (one rarely heard in the K-pop realm), and the cleverly used background singers, make for an intriguing listening experience.

The subject matter of the song quickly explains its eerie atmosphere. The speaker talks about their need for the one they love, which manifests itself as an obsessive, destructive desire. The language used in the song is remarkable for the resemblance it bears to the way an addict would describe his addiction:

“Like a habit I can’t quit, yeah
My line of vision narrows
My breathing grows heavier
I leaned against the cold wall …
Even if you call me crazy …
It has to be you”

Such an all-consuming need can lead to no good. The speaker stalks their lover and the both of them finally “break down red”. The music video gives us more clues as to what that might mean, but even the song alone has the listener guessing that it cannot be too positive of an ending.

The music video focuses more on conveying a feeling of uneasiness and dread rather than a cohesive storyline. There are a male and a female character; and though it is not explicitly shown, the MV seems to suggest that the male character is the one operating a camera and filming in front and inside of the female’s apartment. While still alive, and recorded from the outside, the female character appears immobile.

This, and shots of the male character alternating between him caressing her lifeless body and dragging her along with him, might lead the viewer to think that the male character has killed the female character. Such an assumption would tie in with the line “we break down red”, as well as explain a later scene where the male character seems to contemplate suicide. Yet, it is unclear how he would have killed her. No blood is visible, and there are no conclusive scenes that show the male killing the female. 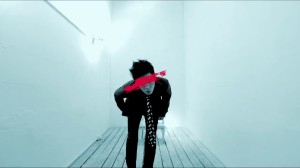 Another question pertains to the meaning of John Park’s character in the MV. He’s often in the same (sometimes abstract) rooms as the two other characters. Occasionally, shots alternate between him and the male character in a way that one might suspect them to be the same person, or Park to be at least somehow part of the male character’s psyche. His detached and aloof demeanor definitely suggest that John Park’s character is not human.

After long consideration, both song and music video receive a 4 out of 5. The dramatic instrumentation of the song immediately evokes an emotional response from the listener, much like the great score of a thriller or a horror movie. On top of that, one has to admire John Park’s outstanding, compelling voice, which further intensifies the song’s effect on the listener.

In the midst of determining the song’s evaluation, both the song and the music video’s subject matter have given me pause. The obsessive longing for a woman that defies all rejections and borders is not a new subject in pop music, but it is instead an increasingly worrying one. Often, such fatal one-sided ‘love’ is romanticized and the female suffering seems to be of no great importance to the speaker.

While the female in the MV for “U” is once again passive and objectified, the narration does not seem to justify the male character’s behavior. Instead of being romantic, the atmosphere of the music video is consistently unnerving and menacing. The male even seems to feel so guilty that he considers killing himself. As a viewer, one does not sympathize with him: The audience may fear or pity him but they cannot condone his actions.

This differentiated depiction has led me to assess the music video positively. What are your thoughts, readers?