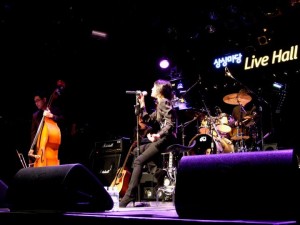 Welcome back to another edition of our Indie Gem segment! This week, I’d like to introduce Heenain, a one woman pop/electronic act.

Heenain first caught my ear last year with the fun and chill “Midnight” and though she hasn’t released anything new since then, it’s still worth delving into her discography to take a look at the quality songs she has produced.

Debuting in 2007, Heenain’s first three single and EP albums featured sultry smooth vocals over relaxing jazz backgrounds. “Don’t Go Lady” and “On and On” exemplify this quite well. Her venture into electronica began on Mizimum Heenain Vol. 1 in 2008 with the tranquil “Mizimum” and faster-paced “Modern Love,” which retained some of Heenain’s original jazz sound.

After subsequent releases and collaborations with other artists (1sagain, Fatdoo, Molly.D), Heenain experimented with pop on the popular “U Got Me” and “1,2,3.” These two tracks reflect a softer approach to love songs, with Heenain’s vocals easily conveying a sense of delicateness that was not present on her first few releases.

A later release granted us “You’re a Jerk,” a contrast from the sweet and bubbly “1,2,3.” “You’re a Jerk” takes a darker turn dealing with the betrayal of a lover. Heenain’s voice is further highlighted by the piano and the way the song crescendos without overwhelming the listener. Her voice becomes almost haunting on the stripped down orchestra version.

What makes Heenain a talented artist is that she doesn’t get bogged down by one genre. Throughout her extensive discography, she takes on jazz, pop, ballad, and electronica. The fact that she’s able to alter her vocal style to match the song also makes her extremely versatile. Additionally, Heenain participates in both song and lyrical composition on almost all of her albums.

Although Heenain hasn’t released any new material lately, her past discography is ripe for discovery. And though I didn’t mention any of her collaboration songs, they’re definitely worth checking out as well.

This has just been a small taster of what Heenain has to offer. It’s plain to see that Heenain’s a gifted and accomplished artist whose broad range of music definitely makes her worthy of being our K-pop Indie Gem segment. I hope you’ve enjoyed the above recommendations. As always, please let us know what you think!