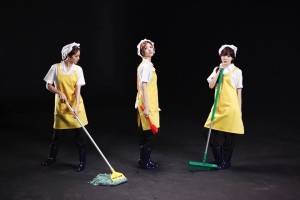 Orange Caramel have made waves with their latest comeback, My Copycat. The charming “Where’s Waldo/Spot-the-difference” concept has won a lot of praise from fans, including us writers at Seoulbeats. And now, they’ve done something with My Copycat that they haven’t done before: pushing their B-side, “The Gangnam Avenue”.

“The Gangnam Avenue” appears to be quite an odd sock for an Orange Caramel release. The hallmarks that fans have come to associate with Orange Caramel are gone. There’s no quirk, no cuteness, no bubbling sweetness. “The Gangnam Avenue” is a song rife with lyrical dissonance — a breakup number with an energetic techno beat. Yet that exact combination dominates Orange Caramel’s B-sides. For example, “So Sorry” off Catallena and “Bubble Bath” from Lipstick. It’s good to see both aspects of their discography on display for once.

It helps that “The Gangnam Avenue” still captures the feelings that usually come immediately after being dumped. Orange Caramel are melancholy during the verses, and the beat slows down and fades to match their tone before raring back to life at the chorus. Even when the beat picks up, mirroring the anger and frustration of getting dumped in public, it’s in a minor key, letting the sadness continue under the rage. And that’s really the heart of “The Gangnam Avenue”.

It works because breakups are not these paralyzing events that trap people in eternal sadness. Some people get angry, others put on a brave face. Everyone tells their friends that they did the dumping, because they deserved better. But underneath the posturing, people remain heartbroken. Orange Caramel may be strutting down Gangnam Avenue, but they’re sobbing while they’re doing it. That makes it real.

While the song “The Gangnam Avenue” is pretty spot on, the MV isn’t. There’s one last Orange Caramel staple missing here: a budget. Holy Christ on a stick, this thing is cheap. It looks it, too. Orange Caramel’s videos are known for their good production value and attention to detail. That hasn’t been present in “The Gangnam Avenue.” It’s blatantly filmed on an empty soundstage, with really bad CGI in place of an actual set. The closest thing to a dance is Raina, Nana, and Lizzy strutting down a very poor man’s rendering of Gangnam Avenue, and half the shots are repeated multiple times. It looks like something an intern got tasked to complete in 20 minutes. I could make a better-looking MV, and I’m a broke college student with a severe allergy to technology. 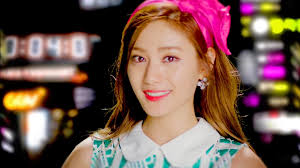 That said, I cannot hate the video. It might be the cheapest thing known to K-pop, but it has a plot. Is it a good plot? It’s not bad, but it isn’t exactly Shakespeare. The ladies of Orange Caramel are maids, working until the clock strikes midnight, at which point they become foxy ladies worthy of Gangnam. Seho, doing his Roommate costar a favor, comes across Nana’s abandoned shoe, and is filled with regret over ending their relationship. Okay, I lied. This plot is incredibly clichéd, and was most likely born when the crew got to the soundstage and saw that the cleaning crew had left their equipment behind. But it still exists, and that’s a glorious change in the wind.

Box MVs are usually tolerated on the logic that they’re cheap and easy to make, and not every company can afford an elaborate production. “The Gangnam Avenue” has shot that in the face. It was obviously rushed, and it honestly doesn’t look very good, but I would still rather watch this than another video of dancing with close-ups. That’s what live stages are for. MV’s are supposed to enhance a song, give it a little more than what it’s got. “The Gangnam Avenue” proves that goal is doable on any level, from a multi-million dollar shoot to 40 dollars and a borrowed camera. No company has an excuse to release a plotless box MV ever again.

“The Gangnam Avenue” isn’t Nobel-prize worthy, but neither the song nor MV are bad. Of course, considering that it’s a B-side whose MV looks like everyone agreed to get paid in gum, it’s unclear if that’s praise for Pledis or an insult against everyone else. Either way, solid work, Orange Caramel.