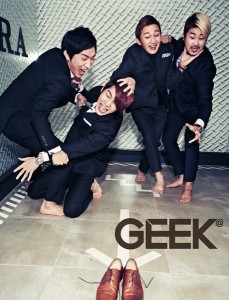 With December already here, it’s time to prepare ourselves and reflect on the year that was 2013.

While many of us come to K-pop for its manufactured synthesis of synchronized pop, there are plenty of artists who fall outside of this promotional mold, who dabble in the mud of musical integrity at the expense of overall exposure. That’s why our K-pop Indie Gem segment places a spotlight on independent artists whose music deserve much wider exposure but has yet to (or refuse to) transcend the realm of indie into that of the mainstream.

What are your favorite releases by an indie artist in 2013?

Ambika: Hands down, my favorite k-indie song of the year is Jaurim‘s “Icarus.” Other favorites are Jaurim’s “Tempest,” Demicat‘s “Locked in the Dream” featuring Koonta, Sogyumo Acacia Band‘s “I Saw the Story,” Love X Stereo‘s “Fly Over” and “Secrets,” Ventura‘s “Listen to My Heart” featuring 3rd Coast‘s Han So-hyun, Dickpunks‘ “Answer Me,” Glen Check‘s “Young Generation,” “Paint It Gold,” and “I’ve Got This Feeling,” or really anything off of Youth! and Dear Cloud‘s “U” and “Polaris.”

Miyoko: The first song that popped into my head for this was Gogostar‘s “God of Snowy Fields.” I also enjoyed Clazziquai Project‘s album (“Can’t Go On My Own” ), Jung In‘s “Autumn Guy,” and the Love X Stereo album Ambika mentioned.

Are we also doing hip-hop on here? Because Crucial Star‘s “Feel Like I’m Back” has been my jam since April.

Leslie: In the past few months, I’ve been totally loving Yoo Sung-eun‘s “Healing.” Her voice gives me chills. And since Miyoko brought up hip-hop, I also love the entirety of Rhythm Power‘s EP The Trio – Stage One. Their single “Bond Girl” featuring Zion.T is the most approachable because of its awesome James Brown-esque funk-fest nature, but I’m more drawn to their other two songs: “Let’s Walk” with its more retro sound and “DDR (Dance Dance Revolution)” with the great use of electronic music and dubstep.

Going back a little, I loved A.T.‘s “Don’t Be” featuring Geeks, for which I actually reviewed the MV. Her voice and versatility just blow my mind. Another song I am still digging is “Maem Maem” by Bebop and Humming Urban Stereo with its fun electronic indie pop sound. Also from summer was Kim Greem‘s “Just the Two of Us,” which was fantastically sensual in a lounge music kind of way.

From early in the year, the only thing I can think of at the moment is Baechigi‘s “Shower of Tears” featuring Ailee, which drew me into Baechigi’s entire discography, though I was confused for a bit until I figured out that Ailee sings on the track but Jiwon from Spica was the one in the MV and who also promoted with them. Anyway, their rapping styles are great and different. I’m also going to second Ambika on Dickpunks and Jaurim because I have been loving their albums like crazy.

I also loved Brother Su‘s album, Paper. My favorite song was “Why Are You Being Like This” which features Swings.”It’s Because I’m Shy” is another great song with a smooth jazz feel. Kim Park Chella, producer for Indian Palm, recently released an interesting album with “True Loyalty” being my favorite although “Hey! Hey!” is a close second.

Heenain (H9) caught my attention this year with her release “Midnight.” It’s electronic based and fun — two things I love in music. Another female artist I found (which I am still excited about) is Fromm. I loved the whole album but “Don’t Play With my Heart” and “Merry Go Round” stand out the most to me. More great release this year would have to be Demicat’s “Make Us Whole,” Ventura’s “Moon” featuring MYK, “Listen to My Heart” by Smells, “Can’t Breathe Anymore” by Herz Analog, and Yoonhan‘s “Man on Piano.”

Mark: Leslie, I find your choices very curious as it brings into question what we define as “indie.” Baechigi may be a relative unknown to international audiences, but he’s certainly not so in Korea. The strong performance of “Shower of Tears” on the charts proves such.

I also noticed that a lot of the songs you mentioned feature mainstream artists such as Ailee, Geeks, and Zion.T. If these artists are well connected enough to secure a collaboration with mainstream names, should they still be considered “indie?” Either way, it’s great to see that more established artists are lending a helping hand for others to gain exposure.

Kim Greem isn’t mainstream to most but her origins are rooted in the handful of artists who got their start from reality singing competitions. How should we classify these type of artists?

Lastly, the only indie artist I’m into is one few have ever heard of: Lady Owl. Her music is very reminiscent of Taeyang from the Solar era. She doesn’t even have a MV for any of her songs (at least none that I can find) and barely any images to put a face to her voice. Her most recent song has less than 300 views on YouTube, and I think half of those views are mine!

Which begs the question: is it fair to lump her in the same category as the artists mentioned above? Are there sub-categories within the indie genre that can help us differentiate?

Leslie: I’ve really always had issues with what is considered indie and what isn’t because there are a lot of artists that I love but know that are completely unknown internationally even though domestically they may have a huge following.

Personally, I’ve always looked at the classification of music as being somewhat irrelevant and arbitrary because there is so much crossover and borrowing of styles.

However, because it’s necessary, I feel that what we classify as indie, because we cater to an international audience that tends to limit its scope to idols, may differ from what is considered indie in Korea, though the two may overlap. Also, the definition of “indie” has always been a gray area and a point of pride, which is what makes it divisive sometimes, so it’s no surprise that we’re having this discussion.

Miyoko: Besides the points that Leslie brings up, I have noticed a tendency on K-pop websites to label Korean music releases as either “K-pop” or “indie,” which forces us to inevitably lump “non-indie” yet not K-pop artists into the indie umbrella category — what it ends up meaning is “not K-pop.” Of course, there are categories for non-K-pop, non-indie music (i.e. regular music genres), but when we don’t specify, the question becomes, where can I give a shout out to a band like Nell? Because I can’t really call Nell “indie,” but if the band doesn’t get a mention here, they might not get mentioned at all for the work they’ve done this year.

Mark: I see Miyoko’s and Leslie’s points. Indie should be what one personally defines it as, which in its most broadest form is somewhat synonymous with “non-idol.” But then is it possible for an indie artist or company to strive for idoldom? I’m sure if we search hard enough, there are many independent artists and small time labels that seek to enter the idol game but have yet to gain the recognition. What about the term “underground?” Is that term specifically associated with indie rappers? Is it possible to have underground idols or rock bands? Anyway, I’m glad we’re examining the nuances of the term.

Shweta: “Indie” in the context of international perceptions of Korean music, at least to me, signifies a state of being–of disassociation from idol culture. Not idol music, but idol culture. No rabid fans, small performing venues, limited music show promotion, no large entertainment companies, organic stages, etc. But even then, there’s a lot of individual perception involved with labeling groups with the “indie” tag; if we’re going to be all technical, we’d either be suffering for days just trying to categorize artists or ending up with a sparse list.

So here is my miniaturized list of “That-Which-May-Or-May-Not-Be-Indie-But-Who-Really-Cares” releases I enjoyed this year:

Johnelle: I’m not as into K-indie acts as much as some of our other writers, but there are a few bands I keep track of that I like. One of the groups is Standing Egg and I really enjoyed the laid back and mellow feel of their songs “Miss Flower” and “Lemon Pie” off of their Ambler album that was released this year.

Two Weeks, which was seriously underrated, well written and had great acting and was one of the best dramas this year, had a great OST with many indie artists contributing to it. Dickpunks had a lovely ballad, “This is the Person.” I loved Toxic‘s contribution, “Turning,” and Nell sang the main theme of the drama, “Run,” which, in my opinion, is one of the best songs of the year.

Anyone coming out from Amoeba Culture may now be walking the thin line between indie and mainstream, but I loved Zion T’s “Babay” and Rhythm Power’s “Bond Girl.” Also, riding that line would be Superstar K4’s Honey G who released two impressive debut songs “Baboya” and “My Love” which both had a great MV.

There was also the band Cheeze that I came across with their awesome video game inspired MV for the song “Mango.”

Fannie: Like others above, I think the definition of “indie” can be pretty subjective, especially since there are a lot of labels now that house both indie artists and idol groups under the same roof.

Many of this year’s song releases that I enjoyed have already been listed, but to add onto that, I have Vanilla Acoustic‘s latest albums 2nd (Part 1 & Part 2) on repeat, and in particular, “Love is Over” featuring Illinit.

I’m also super excited for Younha‘s upcoming Subsonic album, which is about to drop!

Fannie: Is she? I never thought of her as one, but I guess I could see where you’re coming from.

Erika: I don’t know if they’re considered indie, but can I put in a vote for Norazo‘s “Wild Horses“? A video featuring centaurs whose equine halves are made of stiff, toy horses deserves to be on any and all of the lists. Ever.