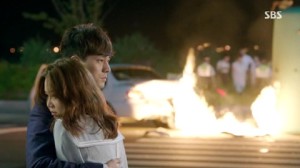 It’s a good time to be a K-pop fan with good dramas, good music and hilarious varieties in abundance for fans to watch and enjoy. Some definite must sees from last week other than what’s on this list were: Good Doctor, Master’s Sun, Two Weeks, Lee Hyori’s Xunnie on OnStyle, and Exo‘s second visit to Weekly Idol where they made sure to have Luhan in LOTS of shots.

The following are the top 5 Things that happened in K-pop last week that I thought were a bit more special than the rest.  As usual, if you’re not up-to-date on your K-pop and don’t like spoilers–turn back now or prepare to be spoiled.

It was a toss up for me over which performance was my favorite from the Barefoot Friends‘ My Story, My Song special. In the end I chose Yoon Shi-yoon‘s performance accompanied by Juniel and Epik High‘s Tablo. The song Yoon Shi-yoon performed was “Grandpa’s Bicycle,”  a song about his fond memories of riding around the neighborhood with his grandfather and how he felt safe and free.

Infinite Challenge‘s latest mission was enititled “Please Take Care of Infinity Challenge” and asked for teams of students from elementary school to college to submit ideas for their take over of the show.  The whole show.  The teams had to come up with the concept for the episode as well as the props, locations, etc. The top teams selected from over a thousand entries pitched their ideas to the cast. One of my fave pitches was from the youngest team to make the cut whose 12 year old leader had the cast in stitches and also won himself the job as head PD for an upcoming episode. This future filmmaker seems to have a bright future ahead of him… if only he survives this shoot with the Infinite Challenge cast.

3. Not Knowing about Love

On the Jang Mi-hwa and Lim Hee-sook special of Immortal Song 2 this past week, Exo‘s Chen and Baekhyun sang their rendition of Lim Hee-sook‘s hit “Really, I Didn’t Know.” Although some have said that they might have lacked the maturity and emotional depth to pull off the song, it was still an awesome and powerful performance. Been a fan of Chen‘s voice since hearing he and Luhan sing “What Is Love” at KCON 2012.

Nothing could be easier, right?! Nope. The guests on the last episode of Running Man included Jo Jung-chi, Jung In, Kim Ye-rim, John Park, Sayuri, Kim Kwang-kyu, and Park Sang-myun all coupled up with the cast and competed for gold bars on the last episode. Unforunately their team work, or should I say couple work, didn’t always work out as you’ll see below in the case of Lee Kwang-soo and John Park.

Those were the 5 Things I LOVED in K-pop that happened last week, were they yours?