Queen B'z Makes a Provocative but Controversial Debut with "Bad" 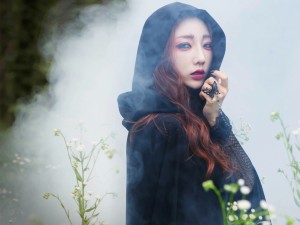 With the trend in K-pop being disco or summer, it’s always great to see a group go in a different direction musically, and it’s especially intriguing when it’s a rookie group, in this case Queen B’z. The new rookie group from JS Entertainment released their debut track “Bad,” which has a great Latin flavor to it.

The girls are supposed to have a “noblesse concept” (noblesse is the French word for nobility). Other than their name, I’m not quite sure what that is supposed to entail. The strange part about this group though is not that but rather that four of the five members already debuted in P.O.P Con, another group from JS Entertainment, in November of last year. It’s strange that the company would call this a debut when all they really did was change the group’s name and make a member switch.

Regardless, while the quintet is doing something different musically, they’re not straying too much out of the norm as they’ve jumped on the gothic vampire train with the music video for their debut single. With a performance version released on July 30 and then the original version released on August 15, “Bad” takes the more literal rather than symbolic route with the theme, and it’s a feast for the eyes that’s just begging MOGEF for a ban.

The storyline in the performance version, which was released first, is somewhat clearer after the release of the original version, but it still is quite murky. We open with a quote from Dostoevsky: “If the devil does not exist, and man has therefore created him, he has created him in his own image and likeness.” This implies that the so-called devil in this music video will be in the form of a man.

Over a track of Tchaikovsky’s “Waltz” from Act I of Swan Lake, the man in question enjoys eating grapes sensually poolside as he relaxes and drinks a glass of red wine. His wine is an aptly titled Casillero del Diablo, a Chilean red wine whose name means “The Devil’s Cellar” in Spanish. Our devil, though, appears to be a serial killer who has just killed his 10th victim according to the article he is reading, but the police have no clue about him besides the symbol of a pentagram.

We then get a flashback of the night with his 11th victim, who now floats before him facedown in the pool. In a surprisingly erotic scene, we find out that he had sex with her, and it appears that he then choked her. We don’t get any of the details of what happened after, simply that he seemed to then have carved in her back a Star of David, which I take to be a botched attempt at a pentagram considering the article from earlier. We get several shots of his large ruby ring, obvious foreshadowing of its importance to the plot.

Finally, the ladies of Queen B’z arrive, rising from the water, as we get a shot of the man’s back featuring scratches and a tattoo of the scripture Joshua 1:9 in English (“Be not afraid neither be thou dismayed, for the Lord thy God is with thee whithersoever thou goest”) plus a shot of the same scripture in Korean. This is quite fascinating as it has been implied that he is the devil, especially with the inscription on his phone of בעלזבוב, which is Hebrew for Beelzebub, another demonic association. 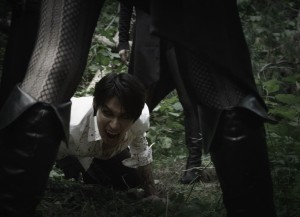 As “Bad” comes on, we then get a shot of him in the woods, blood on his mouth and fangs bare, and it becomes imminently clear that he is a vampire and that the girls have come for him. The confusion is how he is the forest and in a hotel or apartment of sorts at the same time.

The best way I can understand it is that they caught him before, but he escaped, making all of those scenes flashbacks. But it’s hard to say because it seems that they took his ring from him in the forest so I’m not sure that it’s supposed to be that way, unless all of this happens after he kills his last victim.

Regardless, they’ve caught up with him, and member Jini holds a gun to his head with a strange girl dressed in white standing behind her and holding a stuffed animal. Jini shoots him, but it doesn’t seem to kill him, just injure him. Upon his capture, things get kinky when they bring him to a S&M dungeon, where they hold him stripped down to his underwear, tied up and blindfolded.

Here is where it gets really confusing. There is a montage of shots of our half-naked man, snakes and what appear to be fangs on our supposed good girls. One of them takes his ring off (again?) and gives it to the unidentified girl in white, and that’s when we see other men who I take to be vampires also chained up.

The music video ends with the stuffed animal on fire and the ladies returning to the water from which they’d arrived. As it stands, it’s quite incoherent because it leaves so many questions unanswered. What are they? Vampires as well? What is their mission exactly? Why are there snakes? What does the ring mean? And who is this girl?

Not only is the plot unclear, but the cinematography adds to it with shaky filming, intentional blurring, steam effects, and quick cuts between shots. Throw in the sexual overtone in the styling, dancing, setting, and filming, and it’s just overwhelming.

I have to applaud Queen B’z though. The five are incredibly talented and carry themselves quite well live. I particularly love main vocalist Seul Yi‘s mezzo-soprano voice as K-pop tends to veer toward the higher ranges. They also deserve praise for taking on such an intense concept as a rookie group because they execute it quite well, evident in the performance version especially. They have confidence and hold nothing back, which is exactly what this concept needs.

Unfortunately, the concept just doesn’t match up with the track, which is perhaps what sets this music video apart most. With its heavy but quick percussions, the song has distinct roots in bomba, samba and other Latin music, a nice change of direction for K-pop. Being Hispanic myself, I love the cues the song takes from music I grew up with. Some might complain about their use of “bam baraba” or “boom shaka laka” being stolen from 2NE1 and Big Bang respectively, but its the line “Tsa mina mina” that creates a problem as it inches into the uncomfortable territory of cultural appropriation.

Made recently famous on a global scale in Shakira‘s song “Waka Waka (This Time for Africa),” the official 2010 FIFA World Cup song, this line is not actually Spanish. Its origins are the west central African country of Cameroon where a makossa group originally called Golden Sounds released the song “Zangaléwa” in 1986. The lyrics came from slang created by Cameroonian sharpshooters for better communication during World War II, and since the members of the group were in the military, they decided to make a song of support. The song spread like wildfire and quickly became a hit across the continent as an anthem. The song actually became so big that the group changed their name to Zangaléwa.

Around the same time, the song became a huge hit in Colombia — Shakira’s home — through unknown origins, though some claim that it was through West African DJs playing in the city of Cartagena, so Shakira’s choice to incorporate it seems logical. But she didn’t avoid coming under fire for appropriating the song and not even asking the group for permission, although she did emphasize that her goal to teach the world the dance the Waka Waka. Eventually, Sony, Shakira’s company, did reach a settlement with Zangaléwa.

So what does this have to do with Queen B’z? Their use of the line “Tsa mina mina” is likely from Shakira’s song rather than the actual origins because — let’s be honest here — K-pop rarely does its homework, and even I didn’t know the origins of Shakira’s song, outside of the fact that it was African, until I did research. As such, “Bad” likely appropriates a lyric from a song that already appropriated it.

And while Shakira did give nods to its origins as a cultural representation, Queen B’z do not, and that’s probably because the lyrics do not add any meaning to the song. The lyrics ask the question “Who sent you?” which was how the soldiers figured out from which troop were people sent. “Bad” though is about a girl taking control of a situation and dominating a guy. They seem to use the lyric as more of an onomatopoeic accessory, which puts this in the cultural appropriation camp.

But it’s just one line, right? And that’s the thing about its use. The song would have done just fine without it, especially since they make a more interesting cultural reference over which they definitely are an authority. 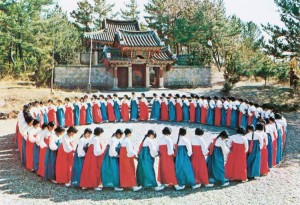 During her rap, Aram says “let’s play a game of ganggangsullae,” making a reference to the 5000-year-old Chuseok traditional dance. The Korean cultural staple is a ritual for women only, in which single, unmarried women gather in a circle and hold hands to sing and dance all night.

The traditional dance was once considered a night of freedom for women in rural villages during the times of restrictions on their behavior. The reference thus makes perfect sense, and it adds a deeper layer to the song as being more than just about having fun and finding love as it questions the freedom that women have.

Lyrics and appropriation aside, the song itself is great and catchy. The rap isn’t the best, particularly the way the track just cuts back into the bridge at the end of it, but the song is still quite strong, especially for a rookie group. It thankfully steers clear of the ever-present electronic sound and has a perfect dance beat, which is no surprise considering its Latin and African influences. But sadly the dance isn’t the strongest.

While the dance matches with the concept, especially the move at the chorus for the part “bam baraba,” it doesn’t match the music well. It would have been better if they had gone with more Latin-inspired moves of quick footwork and swiveling hips. Even if they wanted to go for the strong sexy concept, they could have taken inspiration from tango, which is known to be more sensual. Queen B’z certainly could have pulled that off.

Perhaps the biggest weakness, “Bad” has a strange disharmony between the music video and track. While the music video is strong despite the confusing plot and overwhelming cinematography style, a fun, dance track like this doesn’t need a dark vampire concept. Queen B’z have proven that they are without a doubt a force to reckon with, but this lack of unity between music and concept makes them seem weaker than they really are.