Leafing Through Eddy Kim's "The Manual" 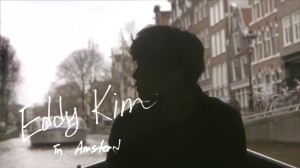 A sepia-tinted, languid Amsterdam wakes up to the voice of Eddy Kim echoing melodiously from the canals, serenading the city with a lover’s guide. With a delectable voice – buttery smooth garnished with honeyed sweetness, and a whiff of crushed coffee beans – this rakish debutant is sure to set you sighing dreamily at his second music video “The Manual,” from the album The Manual.

Like “2 Years Apart,” this MV uses the scenic background to amplify the musical experience. Sparsely populated, the background creates a sense of calm, a calm which allows Eddy’s voice to echo in the canals as he strums his guitar and scribbles in his diary. He acquaints himself with the place in a rather peculiar way – by being one with the structures of the city, structures which have seen the city build and rebuild itself. The chatter of everyday life is pushed to the periphery, embodied in the occasional figure of a passerby or a cyclist, and all we are left with is his voice and his guitar.

I have been trying hard to put my finger on what exactly would describe the song best and have finally decided on – naked, the song is decidedly naked. It is devoid of any artificiality, any ornamentation. Its entire notes stand exposed even while overlapping – the clarity of Eddy Kim’s voice nailing those notes may leave you stupefied. The skill of a singer does not lie in his varying scales, or his harmonies, or the chaotic congruence of all his musical abilities. Rather, it lies in the technique of creating a miracle within limited notes, and “The Manual” is just that acoustic miracle as it hovers dangerously close to a set of flat notes while strategically employing occasional soft notes – those extra moves in the lover’s guide – to create a kaleidoscope of sound. 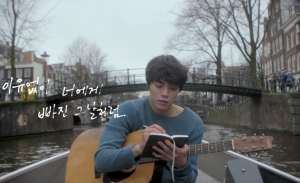 The song opens with a rather playful and friendly approach. Be it giving a warm hug or greeting someone with “Hey! What’s up Beauty?”, the steps listed in the first half of the song can be applied to anyone, lovers – non-lovers alike. However, as the song progresses the lyrics and his singing style shed that platonic characteristic and get more intimate, from “gentle kiss” to “kiss her wildly.” The song which starts out plain and simple is dressed in trills and thrills with Eddy’s growingly passionate voice as he mulls over choosing his heart over his head. Seamlessly, we are guided from sighing dreamily to a quick racing of the heart, before the flight is cut short with him gently reverting to hugging warmly “in a soft romantic way.”

This progression, – from languid to excited, from casual to intimate – mapped also in the stable to quick panning of the camera, saves the song from being dull and monotonous. It also gives Eddy more character and fleshes out the singer in him. Sparing rare smiles and staring straight at the camera, all the while sitting within a limited space –a boat and a tram – closes the physical distance between the viewer and him. The song lulls you into believing that not only is he singing for you, he is singing to you.

A self-composed brilliance caught in arresting ‘moving’ pictures with white marker notifications, Eddy Kim’s “The Manual” is a fresh break from synthesized K-pop — a vacation in the countryside away from the city din. It is highly advised that bound volumes of “The Manual” be sold in all bookstores to experience its wondrous effects in your love life.

And if nothing appeals, then watch it for the unreasonably gorgeous man. With all things kept in mind – the man, his music and his video – “The Manual” gets a 3.75/5.