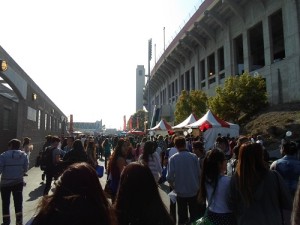 Since the announcement of the LA K-pop Festival, the concert was a big draw for K-pop fans of all degrees. The scale of the event was staggering. Hosted in the Los Angeles Memorial Coliseum and with 100,000 tickets to give out, the event seemed poised to not only mark the 111th anniversary of the Korean American immigration but of the growing presence of the Hallyu wave.

Most of the initial tickets were claimed within the first couple of hours they were offered online and physical tickets were available at a Los Angeles market. The whole free aspect of the concert was intriguing and definitely attracted a mixed crowd of devoted K-pop fans and more casual listeners. In addition, the concert was precluded with a festival held in the parking lot with food, music, and a contest.

My experience began a couple hours before the concert was set to start. I arrived hoping to explore the festival but accidentally meandered into the main entrance for the concert where there was no re-entry. Had I only checked out the site for this information, I would have realized that the booths outside the coliseum were simply sponsor booths. As I picked up a festival booklet, my anticipation of the festival grew as I noted the songs each of the artists were scheduled to perform. 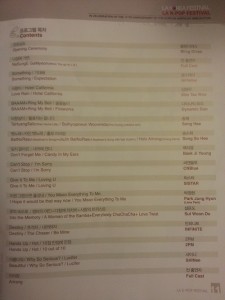 Although the concert was scheduled to start at 6:30pm, it was delayed about a half hour with no reasoning, and there was another half hour of speeches commemorating the 111th anniversary of the first Korean American immigration in the US state of Hawaii. Lena Park gave a solid rendition of the US National Anthem while Jun.K from 2PM sang the Korean National Anthem. The night was off to a start and after a quick introduction of the performers, the hosts Taecyeon, Hwang Soo Kyung, and Yonghwa took the stage to usher in each performer.

The first up were Girls’ Day. They sang “Something” and “Expectation.” They were a bit shaky vocally and drew lukewarm responses from a restless crowd that seemed to be expecting their favorites – unfortunately Girls’ Day did not seem to be one of them. In fact, the crowd and I included, did not really feel immersed until Dynamic Duo hit the stage. They were definitely befitting of their name as they brought a different level of energy. Both members were  lively and utilized the full stage to get the crowd on their feet.

Intermixed with the K-pop acts were more traditional Korean musicians. Song Hae, Song So-hee, and Sul Woon-do all gave a different taste of Korean music to the crowd. I appreciated the variety of Song So-hee’s performance and the use of costuming and dance were a drastic change of tempo from the other acts. They didn’t garner the loudest cheers, but they provided a nuanced delve into different genres and generations of Korean music. 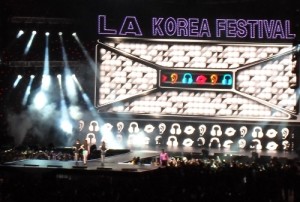 K-veterans like Lena Park and Kim Tae-woo also took the stage to flex their vocals. They were great, but the standout K-veteran was Baek Ji-young. She sounded absolutely perfect emoting her famous ballad, “Don’t Forget Me.” To top it all off, she performed “My Ear’s Candy” with Taecyeon. That performance was nostalgic for me as the song was released during the first summer I really became a K-pop fan. Baek Ji-young was one of the more sublime acts of the night for me.

There were also a number of unexpected performances which were not listed on schedule. Most were great but one was not so good. There was a random act singing a generic English-language pop track interjected in the mix. As the concert was just beginning to build a momentum, this act came along and ruined the flow with a song that repeated lyrics about partying on a Saturday night…

In contrast, some more positive surprises were anticipated performers singing songs not listed on the program and the special stages. Sistar drew applause for unexpectedly performed “Alone” and CN Blue ended their set with “LOVE.” CN Blue also collaborated with Dynamic Duo for a special joint performance while Toheart made a quick appearance with “Delicious.” Girls’ Day came back on stage later in the night to dance along with Sul Woon-do’s “Love Twist” and performed a rendition of the Pussycat Doll song “Hush.” My favorite special stage was when Wooyoung, Soyu, Junsu, and Hyorin busted out a cover of Alicia Keys’ “If I Ain’t Got You.” Their harmonies were on point, and my inner fanboy really rooted for Hyorin when she made her entrance mid song.

The marquee performances were the last three: Infinite, 2PM, and Shinee. Infinite were great while they performed three of the previous singles. 2PM and Shinee mixed it up with a few non-singles added to their set. 2PM brought a lot of energy with their performance of “Hands Up.” Shinee was down a member as Minho was missing in action, but they still received the loudest cheers of the night as they closed the concert with “Lucifer.”

Overall, the experience was a pleasant one for me. I was a bit sad during the closing group performance as the arena emptied out tremendously. A part of me wondered if it was because the concert was free, but it was also quite late at that point. However, the mix of special stages and deviation from strict adherence to the program allowed me enjoy the concert more than if they had solely stuck to the schedule. Did anyone else attend the festival? What was your favorite performances?