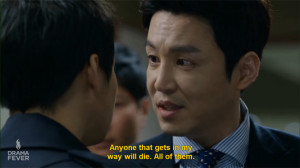 Things are heating up in 3 Days. A power struggle, murder, and a plot to set off a bomb in the middle of Seoul all filled the last two weeks of the political intrigue/action drama. The characters begin to show their true nature, intents, and their gumption to do whatever it takes to either destroy President Lee or salvage his heavily marred name. And, of course, there’s still the issue of Han Tae-kyung attempting to figure out if his father’s death was in vain.

President Lee and Tae-kyung are still very much working in the minority of the characters on this show. Their intentions are completely pure, though their means to get there may be a bit questionable. The only goal of the President is to come clean to the people of Korea, going as far as to continue to meet with Chairman Kim and negotiate. There are a few instances in which the audience can’t help but question President Lee’s motives. Most of the characters, even secondary and tertiary, have proven that their loyalties lie with Chairman Kim and his desire to maintain power of the economy of South Korea. Whatever their reasons for siding with the maniacal chairman, that remains to be seen. But it’s clear that President Lee’s list of people he can trust dwindles with every episode. 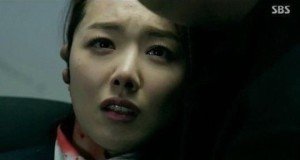 Then there’s Tae-kyung. His loyalty to the President has been greatly tested since episode 4. Not since he was forced to shoot his mentor, Agent Ham, to uphold his vow to protect the President at all costs has Tae-kyung’s fortitude been pushed this far. Another friend from his days in the Secret Service, Agent Lee, has been gravely injured in the quest to uncover what Chairman Kim and Chief of Staff Shin are actually planning for President Lee and South Korea when (or at this point if) the President is impeached. Her so-called heroics gifted her information about a planned attack on Seoul, but it also landed her in a coma when one of Chairman Kim’s henchmen ran her over in the Blue House parking garage… in front of Tae-kyung.

In a bit of typical drama theatrics, Tae-kyung forces his way into President Lee’s office, throwing documents and office equipment until he gets the President’s attention. When President Lee does finally show up, he admonishes Tae-kyung his temper tantrum, asking him, “Is this your way?” Tae-kyung says, rage in his eyes, “Yes. I have nothing left to worry about.” The President calms him in the best way any pseudo-father figure can: breaking a vase to show Tae-kyung just how childish he’s being. He then implores Tae-kyung to call on whatever reserves of sanity and loyalty he may have left after witnessing yet another sacrifice in his chess game with the Chairman Kim. Tae-kyung doesn’t understand it, but his determination to see this to the end, to find out exactly what it is his father got into that he had to die outweighs his moral dilemma and the difficulty to trust anyone around him. 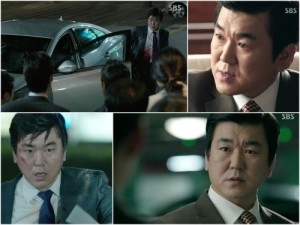 Meanwhile, Chief of Staff Shin has been whispering in the Prime Minister’s ear, dropping hints that President Lee is unsavory and trying to find reasons to suspend his impeachment. It’s clear his intentions are to take the reins as the leader of South Korea because in his mind he’s “different” than President Lee. His goals are completely pure and he’d never put the people in South Korea in danger for the sake of revealing the truth about his past indiscretions. It’s terribly unfortunate that he doesn’t realize by getting in cahoots with Chairman Kim he’s become nothing more than his lackey and puppet, no different than President Lee all those years before he was even thinking about presidency. Again, it’s a situation in which everyone who asks something of Chairman Kim owes him something and must carry out his bidding in exchange for what they want.

And this is where things get truly interesting. There’s an awful lot of “bait and switch” in 3 Days. Just when you think you know what a character’s intentions are, it turns out what we saw at the end of the previous episode was nothing more than a diversionary tactic to keep audiences in suspense until the next episode. It’s a typical drama mechanism Kim Eun-hee has used for the past five or six episodes. Though it does hike the predictability up a notch, audiences are still want to find out exactly how each character is going to surprise them.

Though Agent Choi has been more trouble than she’s worth throughout, she gets a reprieve from her overt stupidity when she wriggles her way into Chief of Staff Shin’s confidence. However, that momentary sign of intelligence is undermined by her simply not watching where she’s going or thinking that she could be under surveillance. Though she was attempting to swipe “Confidential 98” from Chief of Staff Shin, she not only grabbed the wrong file (inadvertently finding out about a far more sinister plot than what happened in Yangjiri sixteen years ago), she doesn’t see the huge car speeding in her direction in attempt to permanently silence her. President Lee finds out that Chief of Staff Shin copied the confidential document onto a USB (shaped like a credit card) and stops him before he can send the information to Chairman Kim, only to use it as a bargaining chip himself. Then Shin surprises audiences by getting the USB back and giving it to Kim as intended… only for Kim to find out the USB has been erased. 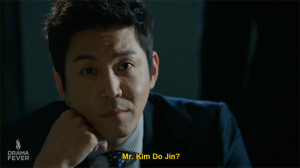 What’s been true throughout the series remains true in the home stretch. The characters are incredibly strong. Kim Eun-hee wrote her characters very precisely, but they could’ve very well fallen flat in the hands of lesser actors. The cast of 3 Days executes their characters with such accuracy it’s just incredible. If they don’t get at least one nomination for best ensemble during awards season, I’ll be very surprised. However, as with the last four episodes, Choi Won-young’s portrayal of Chairman Kim is just chilling. He’s by far the most interesting and most brilliantly conceived character in the show. His deterioration into sheer madness in these four episodes is simply disturbing, and Choi’s execution of it is the breakout performance of the show.

The action, though nonstop throughout, has actually become less about ostentation than the subtlety of the action carried out. In perhaps my favorite sequence in the past two weeks, Chairman Kim begins to play classical music, as is his modus operandi throughout the show. One of his henchmen calls him from the car garage of Jaesin HQ and confirms Chief of Staff Shin’s location. Kim orders, “Then kill him.” With those three words we see a definitive spark of absolute insanity in his eyes. His man in the garage walks past Shin and stabs him in the abdomen. The smoothness and precision of the act is actually quite beautiful, as beautiful as cold-blooded murder can be.

The one thing that I’ve been anticipating (and dreading) since I saw there were to females who would be close to Tae-kyung throughout the series, a love story, has very, very slowly started to develop. I have to hand it to Kim Eun-hee. She didn’t derive the drama from this show from the romantic tension that could have developed more overtly between Tae-kyung and Bo-won. In fact, it was only in the last twenty minutes or so of episode 12 and only after Bo-won was almost blown sky-high that even an inclination the two were headed for a romantic end even surfaced. That’s acceptable, and given the course of the show, actually makes sense. 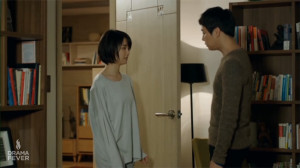 What doesn’t make sense is the use of music in the last few episodes. It’s as if the music department was trying to prematurely force the audience to buy the love story before it was necessary. Scenes that call for a more subtle soundtrack option were bombarded with belter Gummy singing the main love theme at random. Though a main trope of most Korean dramas is the love story, 3 Days at least saved the romance (or subtle, natural hints therein) for a point in which the two characters who spend the most time together almost didn’t have any choice but to feel at least a little something for each other, given the high-tension circumstances surrounding their association. The soundtrack, unfortunately, doesn’t give us time to watch the romance naturally take its course one way or the other.

However, the main focus of 3 Days has never been the music or the romance. It’s the story of how these characters interact and these interactions inform what happens next in the plot. The continued brilliance of the performances from the veteran cast, particularly Choi Won-young, will keep audiences intrigued as we get into the last two weeks of the show.