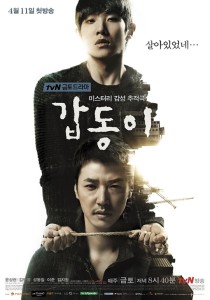 We’re halfway through April and saw a few big comebacks and debuts this week in K-pop. Two highly anticipated dramas also debuted: Gap Dong and Golden Cross. Gap Dong looks great, but me and serial killers just don’t get along. Where are all the rom-com K-dramas?

The following are the top 5 Things that happened the past week in K-pop that I think were a little bit more special than the rest. If you’re not up-to-date with your K-pop and don’t like spoilers, turn back now because spoilers most definitely will ensue.

The boys of Block B made a colorful comeback with their new song “Jackpot.” The MV is a lot of fun with the creepy carnival background and stars popular child actress Kim Sae-ron.

Actually, I love Seoul–just got back from my first vacation to the ROK and it was great–but I digress. One of my favorite acts from season 2 of K-pop Star, 2000 Won, just made their debut with the song “I Hate Seoul.”

[youtube=https://www.youtube.com/watch?v=qkcgi3bnHVY] 3. And the Winner is…

Speaking of K-pop Star, season 3 of the show just had its finale with the winner being the soulful crooner Bernard Park. It was a surprising win as the guitar virtuoso Sam Kim won the most points from the judges, but the fans had their say and gave the win to Park. Both were deserving of the win, but I think Bernard Park needed it more. I have no worries about Sam Kim because someone will definitely scoop him up and he’s still so young. Here’s one of Sam Kim’s final performances, his rendition of Sting‘s “Englishman in New York.”

Congratulations to ZE:A members Kevin, Hyung-sik, Dong-jun and Min-woo for winning the group’s first ever 1st place trophy. They took home the 1st place trophy on the latest episode of Immortal Song 2 where the artists performed to some of the most popular foreign songs to ever hit Korean shores. The boys performed a lively rendition of New Kids on the Block‘s hit song “Step By Step.” Keep an eye out for the behind the scenes looks at the first generation idols like MCs Moon Hee-jun and Eun Ji-won rocking out to the performance.

Was lucky enough to have a friend in Seoul this past week who picked me up a copy of Akdong Musician‘s debut album Play which was released on April 7th. The physical album is worth the money with cute graphics and great pics of the brother/sister duo. My fave songs on the album are “200%,” “Melted,” and “Little Star.”  Akdong Musician’s brand of K-pop isn’t everyone’s cup of tea, but if you enjoyed their previous releases you shouldn’t be disappointed in Play.  Here’s the MV for their debut single “200%” which was undeniably cute and very much Akdong Musician.