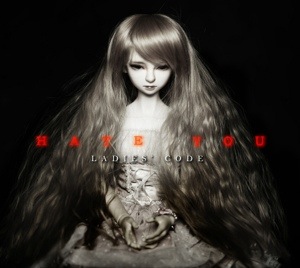 2012 saw the emergence of a very notable rookie groups and artists. From boy bands such as B.A.P. and Exo, to soloists like Ailee, the 2012 group surely caught everyone’s eye, for better or for worse. Compared to last year’s extraordinary set of debuts, 2013 has been relatively short. However, one of the more notable rookies of the year is definitely Ladies’ Code. Despite debuting only relatively recently, the group has gathered decent momentum. As the girls are currently prepping for a comeback, they recently put out a pre-release track “Hate You” to add momentum for their pending return.

To be honest, I am somewhat relieved that “Hate You” is only a pre-release track. While the song is sufficient and could easily hold its own, it has very blatant obvious shortcomings that would have made it fall a bit short from being an effective title track.

The song aimed for a very horror-inspired concept, and it succeeded with executing it for the most part. The intro was absolutely spectacular, for it established the mood of the song perfectly. From So-jung‘s beautiful, husky vocals, to the romantically chilling guitar, to the growling synth in the background, the song intro surely opened the song up very promisingly. However, from there, the song unfortunately drops slightly in quality.

Following the intro, the song dives into its first verse and the synthetic sound it carries for the rest of the track. The verses themselves are pretty sufficient. While they lose the romantic and gothic vibe the intro established so effectively, the steeliness and airiness in the vocals complements the horror concept quite effectively. The small whispers and haunting, elongated adlibs also contributed in the mood the verses set. However, the song’s major downfall is definitely its chorus. 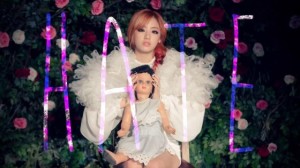 The chorus, by contrast, is very repetitive and tiring, and unfortunately, it bogs down the rest of the song with its monotonous sound. The chorus uses So-jung’s vocals from the intro but adds some unnecessary elements to it. Namely, the song replaces the wonderful guitar instrumental with an overly complex loop of synths, and it adds a shrill echo effect that gets to be tiring and annoying very quickly. These imperfections sadly overwhelm the rest of the song, for the verses become overshadowed and the intro forgotten after the paralyzing effect of the chorus. And really, this is very lamentable, considering the potential to what the track could have been had it keep the mysterious, gothic feel of the first half of the song.

Luckily, the music video to the effort turned out much better. The group was aiming for a horror concept, and they delivered such a concept with little regret, offering a very polished video that surely stays true to its theme. The video is very artsy, and the girls go all out in trying to act creepy, making for an overall interesting watching experience.

The visuals of the video were definitely spectacular. The music video offered three very distinctive main settings: the wall of roses seen at the beginning; the purple and white wall corner laden with disfigured dolls; and the very creepy dining table set. The wall of roses managed to appear very sinister and romantic at the same time, with the roses adding a very picturesque element to the overall shadowed and secluded feel of the scene. 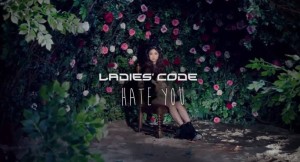 While my least favorite of the three settings, the wall corner still matched the theme of the music video, with the disfigured dolls and the scribbles in the wall being successful in giving the eerie feel the effort was going for. My main issue of the setting, though, was its relatively bright and childish color scheme, which disrupted the video’s visual progression somewhat. Conversely, the dining room setting was by far my favorite. It managed to be dark yet vibrant at the same time, delivering just the right mix of elegance and creepiness the video needed.

Furthermore, the video’s use of the dolls was also very effective. In most cases, the presence of dolls has become a bit cliché in horror-themed videos, but in this case, they work. This is because rather than using them sparingly, the video goes all out in utilizing them, actually tying them into the message of the video. From the content of the video, it seems like the girls are supposed to mirror the dolls, and their tattered states are due to the dysfunctional relationship described in the song’s lyrics. This made the dolls a pretty creative tie-in, for they become tools to tell the story and not as simple, thoughtless props.

Moreover, unlike most other K-pop videos that usually heavily indulge in solo shots of the group members, “Hate You” actually allows the members to come in pairs. This is actually pretty interesting because the video has a lot of symmetrical visuals, and having the members in pairs certainly helps in achieving this effect. The symmetry, and more particularly, the disarray even within this symmetry, proved to be a very intriguing visual, for it gave the video a contrasting balance within some very distorted visuals. 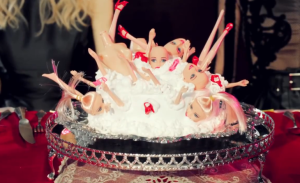 However, if I were to point out flaws in the video, one would be the members’ acting. While the execution varied and some members were certainly better than others, overall, the execution of the scenes were lacking. The girls’ expressions seemed awkward and forced, with the girls looking and feeling posed and maneuvered. Additionally, while I understand the effect they were going for, having the members look straight into the camera only compounded the awkwardness; if they were to look away instead, I believe they would have been better able to portray the mysterious, creepy vibe of the rest of the video. Also, the artsy transitions, while at some points creative, seemed childish and sloppy at other points, cluttering the visuals of the video slightly.

Like I said, I am glad that “Hate You” is only a pre-release, for it would have been slightly lacking as a lead single. Nevertheless, “Hate You” is acceptable as it is; while the song itself is repetitive and grating, it has its shining moments and a pretty on-point and visually relevant music video to go with it. The video itself is vibrant, dark, and actually a bit creepy, with only minor imperfections. Overall, “Hate You” gets a 2.7/5 from me.