Ashley's "Here We Are" Is Uninspired 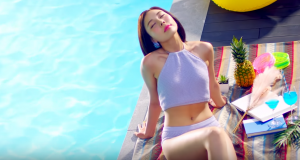 Due to a tragedy involving the loss of two of their members, Ladies’ Code took a much-needed hiatus. Upon their return to the K-pop scene, they debuted with a new image and two singles titled,  “Galaxy” and “Rain.” Both the MVs for the song had a dark-color scheme, contained eclectic imagery, and were accompanied by sultry, jazz-based songs. Compared to their previous tracks, it was a more mature and understated concept for them which helped separate them from other girl groups.

The girls have been together since 2013, and it’s about the right time for the leader of the group to venture out on her own. This is Ashley’s chance to demonstrate her individuality, and prove she’s capable as a soloist. However, Ashley’s “Here We Are” only shows us that she hasn’t developed her own musical identity and is afraid to take risks.

Although Ashley decided to go for a completely different musical style than Ladies’ Code, she still jumped on the tropical beat trend that’s been overused in K-pop today. While picking a safe choice for a summer song may seem like a smart idea for her debut, she doesn’t bring anything interesting or different to the genre. It also isn’t something you’d expect from someone who’s been in the business for about 5 years. The song starts off with slow and soft verses and builds up to a bridge in which she deliver some mildly impressive powerhouse notes. However, it leads us to a surprisingly lackluster chorus drowned out in a typical club beat.

The song itself is about being elated about a love interest and wanting to be with them forever. The lyrics describes those emotions in detail, suggesting her new lover has changed her life around. Basically, it’s an upbeat song about being high on love. The verses are more interesting than the chorus and bridge, but not enough to save the song from being average:

Higher, higher, higher
As if I’m floating on a cloud
This trembling feels good, it’s so new
I can’t find any pain or sadness

The MV is perfect in that it fits the song’s mediocrity. It starts off misleadingly interesting with Ashley in a white dress cutting off her long signature long locks. This likely symbolizes her transformation into a solo singer and separating herself from her former image from Ladies’ Code. However, it leads us to a MV full of all your basic summer tropes with no story to help it stand out against other summer songs. 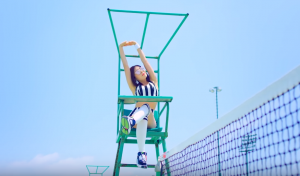 After the haircut scene, Ashley is seen sporting a short bob and is on a tennis field dressed in a tight referee outfit. She’s in various scenes playing tennis, lying on the ground with tennis balls around her, and sitting in the referee stand. It leads to other scenes in which she’s sitting by the pool, partying in a club, and dancing in a soccer field. The theme of the MV is basically Ashley’s visuals and playing fan service with her attractive outfits. There’s no plot and the MV doesn’t have anything to do with the song lyrics.

There isn’t anything bad to say about the energetic dance routine. Ashley stands out against the dancers dressed in white sport’s uniforms. The dancing has some intricate hand movements and arrangements that correlate with the beat of the song. The camera also takes advantage of the open field and pans around and over the dance routine giving us various angles. It’s a peppy routine that does work with the song’s positive message. It does show her range with her dancing abilities but it’s still not enough to excuse the MV’s otherwise redundant concept.

Instead of taking a chance and coming into her own as an artist, Ashley relied on her already established fandom to promote her weak debut. There’s nothing inspiring, different, or memorable about the song or the MV. Hopefully, Ashley is just testing the waters, and will eventually create a stronger single that truly displays her talents. In the meantime, maybe she needs more time with Ladies’ Code to help her grow as a musician.