Sojung Is Potent And Powerful In "Crystal Clear" 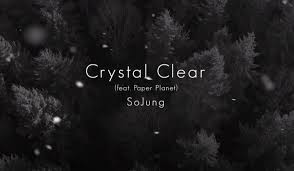 I’ve always had a soft spot for Ladies Code, even before the accident. This means the first solo comeback for Sojung has put a smile on my face, for a given value of “smile”, anyway. “Crystal Clear” is not a happy song. However, it is an interesting one, and I’ll take interesting over happy any day of the week.

It’s not exactly a secret that I am not a fan of ballads. I don’t have anything against them, but the fact is, ballads tend to run together. This is especially true when dealing with the traditional ballad– limiting the tempo to snail and musical accompaniment to piano with the occasional guitar lick and drum riff makes creating a unique sound very difficult. That issue is much less of an issue with electropop ballads, of which “Crystal Clear” is a stunning example. 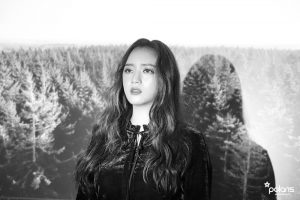 Genres like house and electropop tends to thrive in the more upbeat songs, but when given restraint and weight,  electronic music can deliver immense emotional impact, and that is exactly what “Crystal Clear” does. It’s a masterpiece of tension and release. The tempered build of the beat through the chorus resolves a cessation, a sudden yet potent space in the instrumentation. That pattern of synth lines culminating not in the drop we’re expecting, but an ending or lift in tone repeats frequently through “Crystal Clear”. It makes the audience feel unsettled, which is the entire point.

Sojung’s voice is not the typical female ballad voice. It’s lower, rougher, with a very distinct color, rather than the usual clear voices and high notes. It means that she always sounds unique, but moreover, Sojung always sounds a bit raw. Here, that rawness has been cranked up as she pleads for stability through love. Indeed, the contrast between the heartfelt honestly of Sojung’s vocals and the controlled producution gives “Crystal Clear” much of it’s punch. “Crystal Clear” showcases Sojung as someone who is losing hold on the world, and desperately, desperately clings to her lover as an anchor. She needs that strength, that hold to support her, and pleads that they don’t let go of her; because without them, she’ll be swept away.

That sense of being lost in a too big world forms the emotional core of the MV. Shot in black and white, “Crystal Clear” derives its power from juxtaposing Sojung’s performance with shots of nature. Not just any old stock shots, though. The nature shots used are large and lonely. Sweeping expanses of crashing waves, ariel views of a seemingly-never ending forest; they are designed to make the audience realized how large the world is, and how small we are in comparison. No living creature is seen. The closest we get is when the are projected behind Sojung as she performs, but that only highlights the scale and isolation of the visuals.

“Crystal Clear” is potent and powerful in equal measures. Sojung’s performance nails the sense that she is just barely holding onto her sanity, but trusting enough to let someone else hold it for her. It’s a knockout of a track, and I sincerely recommend giving it a listen.