Roundtable: Take Us Two Your K-pop! 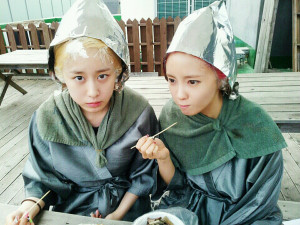 Two little green people show up at your door with laser pistols and demand that they raid your music library for samples of this new musical entity us earthlings call K-pop. It turns out that ever since the Martians have been receiving transmissions of K-pop on their home planet, their youth have gone insane, hence crumbling the very core of their civilization. Determined to save their species before the inevitable implosion of their home planet, they’ve traveled to a highly concentrated source of the corruption to do research in hopes of devising a cure for their people’s beleaguered youth.

Since the Martians are incredibly cute, and you realize that their laser pistols have no affect on a superior species whose physical capabilities have been overly strengthened by the Earth’s incredibly nourishing atmosphere, you decide to help them willingly by allowing them to extract just two songs of your choosing from your musical library.

Which two songs (and just two!), which you feel are most representative of K-pop, would you show to the Martians?

Miyoko: Wow, this is intense for those poor aliens.

I’d choose Shinee‘s “Lucifer,” because not only is it a strong representation of K-pop music, dance and style, but also because it’s most likely one cause of corruption on their planet. On the girl’s side, I’d choose Sistar‘s “Alone” to represent the smooth, sad girl trend, and … yeah it’s also probably a major cause for alien youth insanity.

Johnelle: Only two songs to explain K-pop to Martians?! How could only two songs represent the whole wonderful, yet wacky genre of K-pop? Urggghhhh… If I HAD TO PICK ONLY TWO, I guess I would pick Big Bang‘s “Haru Haru” and T-ara‘s “Bo-peep.” I would say that they cover the spectrum from the sublime to the…WTF?

Gaya: Hyuna‘s “Bubble Pop” and Infinite‘s “Lately.” I don’t know if all the Martians can be cured of their love for K-pop, but they could at least start small and work on summer and Christmas singles first.

Mark: It’s obvious that what the aliens are suffering from is something viral in nature. That must mean all their little ones must be hopping up and down to “Bar Bar Bar” or galloping to “Gangnam Style.” 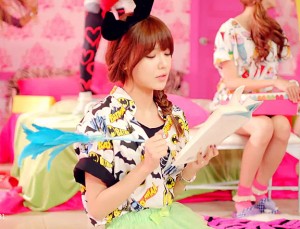 In all seriousness, the green dudes need to get a taste of current K-pop so they can hopefully devise a vaccine for it by the time it reaches their distant planet. And since the current strand of the K-pop syndrome has idols draped in hip hop gear dancing to jarring music which slaps together multiple songs into one, they must experience K-pop’s two most lethal parasites — the alpha strands known as “IGAB” and “Wolf.” We only ask that they send us deliveries of the antidote upon discovering a much needed cure.

Subi: Wow, that sounds like the beginnings of a fanfic.

Mark: We should really turn our roundtables into a fanfic writing workshop.

Ambika: Definitely seconding DBSK’s “Mirotic.” I’m not even a DBSK fan, but that song and dance were just awesome. It also encapsulates a lot of the good of K-pop with some great stage presence.

My second will actually be Kara‘s “Mister.” I know it doesn’t have a Korean music video, but I thought the song coupled sexy choreography with cutesy sounds pretty well, which encompasses what a lot of groups try at some points. Not to mention it just gets stuck in my head if I hear it once.

Nabeela: Oh c’mon guys, it’s easy! SNSD’s “Gee” basically started an era on its own. I’d also throw in Wonder Girls’ “Tell Me.” We all know girls are the real rockstars of K-pop. No one rots your teeth better than the cuties, am I right or am I right?

Shweta: Martians need songs from sources they can relate to, so who would be better candidates to represent K-pop than the resident “extraterrestrials,” Exo and B.A.P?

I would choose B.A.P’s “One Shot” and Exo’s “Baby Don’t Cry” as my two songs because they cover pretty diverse styles. 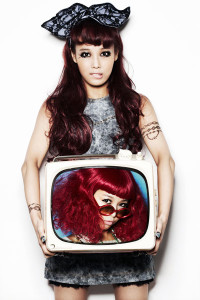 Fannie: I echo Shweta’s sentiment, so to balance out her extraterrestrial boy group selections, I’d also have them watch MVs of 2NE1‘s “Fire” (Space Ver.), and Wonder Girls’ “2 Different Tears.”

Nicholas: The thing is to try to use these songs to give as rounded a picture as can be of the K-pop scene, and try to represent the best (and worst) of it. So my choices would be 2NE1’s “I Am The Best” and Super Junior “Sorry Sorry”.

They are all not bad songs, they stick in your head after a while and the popularity of the groups mean they make for a good demonstration of the K-pop sound. After all, any successful song gets imitated in some way or another.

I will save the guilty pleasures/niche singles/ear worms for when the Martians crave for more and threaten to impal me on my giblets if I do not recommend more songs. Nah, they probably would not, being nice “people” and all.