Confessions of a Fangirl: Exotics, You Guys Aren't Half Bad 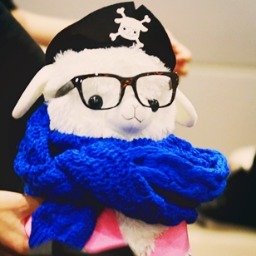 If you haven’t already noticed, we here at Seoulbeats love, nay, we live to harp on all the stupid and unreasonable things fans do. We have, of course, rounded out this acidic and biting description into a more socially acceptable term many know as “fan culture,” but in it’s most base form, we still regard some fan activities as mindless hormonal uncalled for insanity. Once we’re forced to zero in on these obscenities that plague the K-pop fandom, we usually rub our temples after a long face palm, drink some tea, take a bath, tweet about it with profanity on our personal Twitter accounts, and then sit down, open the Seoulbeats site, and attempt to drop some knowledge.

For instance, some of our very best and bravest writers have covered sasaeng hysteria, emotional irrationality, and cultural disconnects between the western and eastern world, among other hot topics that really gets your blood boiling. But perhaps the most recent phenomena that has us Seoulbeats writers rolling over in our graves and banging our heads against the concrete is none other than one fandom that is certain to go down in the textbooks:

Unreal. Honestly. Sometimes, the things Exotics do just make me want to UGH. And unfortunately, it only takes one bad apple to ruin them all. This is, of course, why the handful of psycho Exotics out there have christened this entire fandom with such an ugly reputation, and why most people on the internet here the word ‘exotic’ and literally crawl under their desks or their covers and just cry for the sake of the K-pop fandom. And it’s not like SB gives Exotics much of a break either. We love to rip you guys apart. It’s a sport for us, honestly.

I won’t lie — I fear the Exotics sometimes. I’m notorious for being outrageous at K-pop concerts (we’re talking reckless and ugly crying, piercing screams at inappropriate times, rushing and fighting and leaving no regard for personal space in the quest to get to the front of a general admission standing section; believe me when I say I’ve done things I’m not proud at concerts of just to get closer to oppa during his high note, most of which I still do not regret) but the things Exotics are said to do and have done in group settings scares even me. I would not tango with an Exotic based on their reputation.

But here’s the thing. Hearsay isn’t exactly fair. All the stupid shit Exotics have done that have marred the name of this fandom really are only handful of tactless kids and it’s unfortunate that all Exotics are looked down upon by other fans based on solely on the hypocritical accusation that  Exotics have done some pretty sketch stuff.  Because at least in my experience,  just over the internet anyways, Exotics have turned out to be some of the funniest people I’ve ever encountered.

I mean, let’s give credit where credit is due here, because it’s not like the Exotics asked to wait an entire year for one comeback. SM Entertainment literally placed the Exotic fandom in a blank purgatory between now and EXO‘s debut, which I’m certain had a hand in stirring the madness so rampant in the Exotic community. Exotics didn’t want to be turned into starving, frothing fans with nothing but three mediocre music videos, one unnecessarily long intro no one listened to anyways, a handful of variety show appearances, and the same “MAMA” stage at every award show. This was not the reality they wanted.

But from what I’ve seen, apart from the sad things the crazies do, Exotics have blossomed for themselves an onslaught of humor and creativity in lieu of the EXO comeback that is truly unparalleled. Back away from the sensational headlines for a moment and check this stuff out.

Exotics have literally reworked the debut material in every possible way. They’ve captured literally almost every second of this year into gifs and pictures and yes, fictional movie trailers. 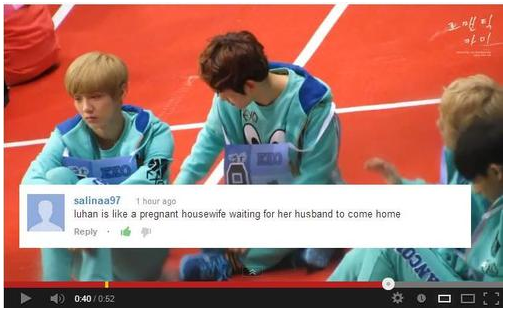 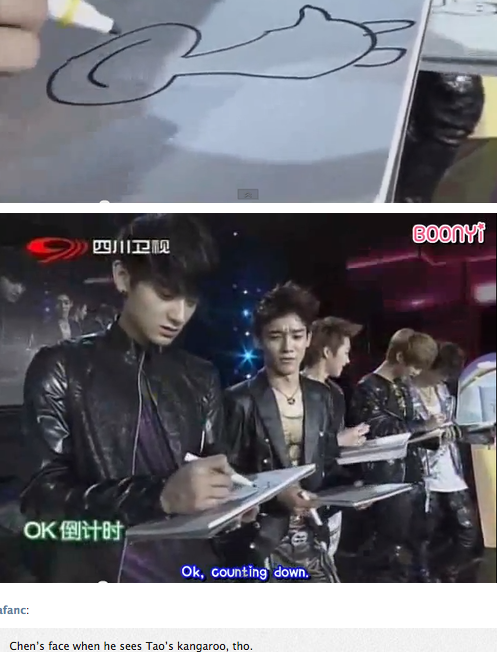 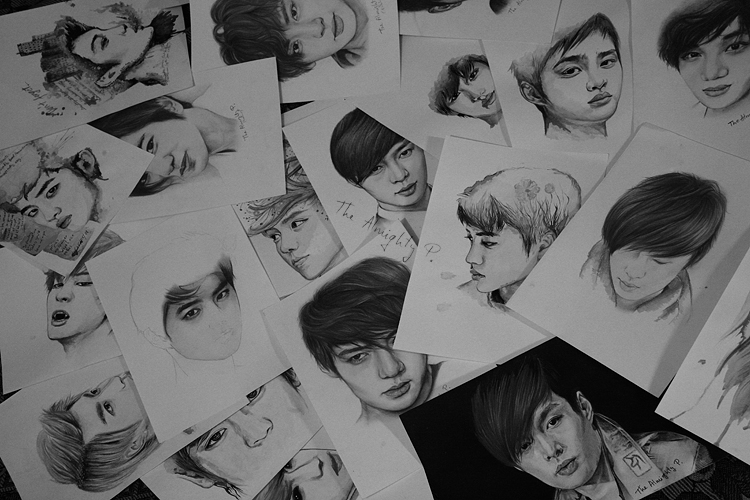 Given the lack of appearances and genuine insight into their lives, you guys have literally made up the dialogue between members into scenarios to haunting accuracy based on the scant information you have been provided. 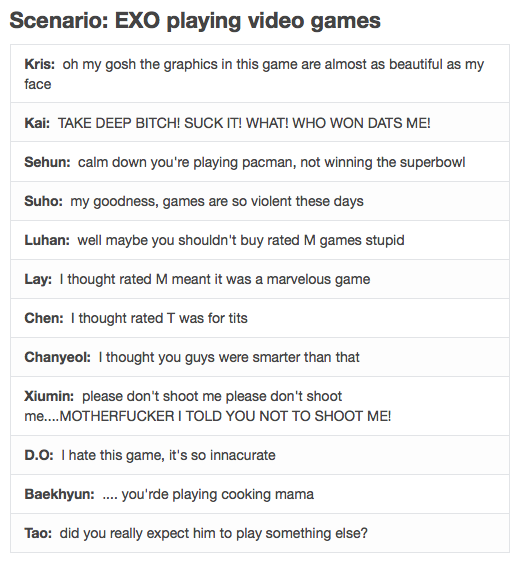 Exotics have voiced their frustrations over the former comeback silence through artful parody. 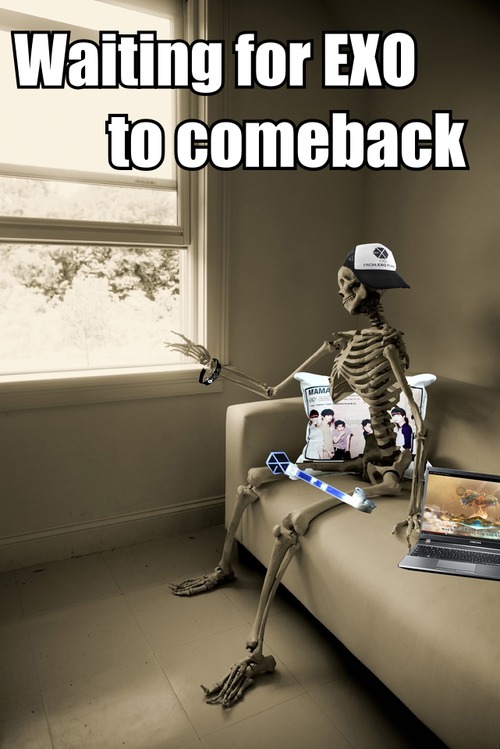 And then when comeback rumors sprang up, eventually leading to official announcements, 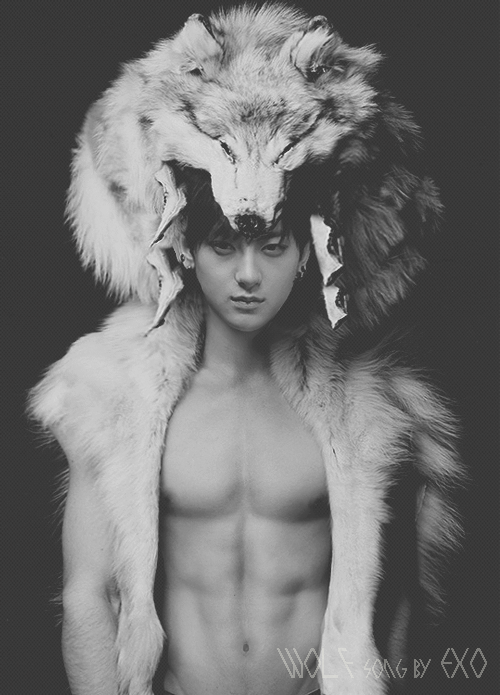 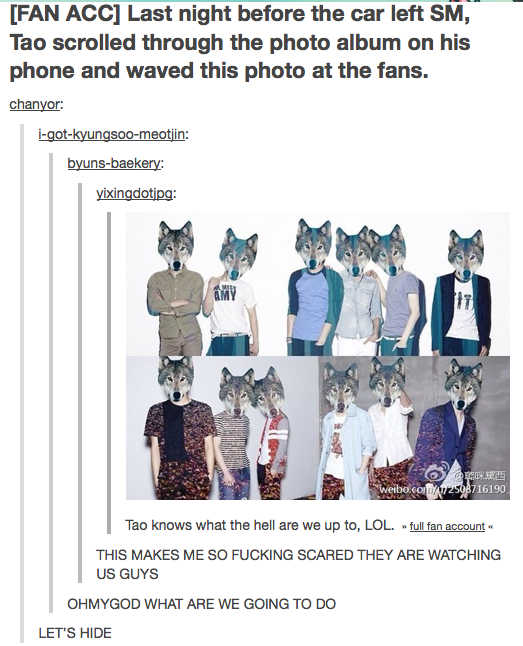 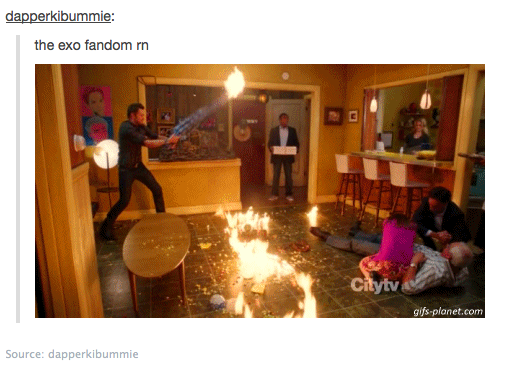 Not to mention the fact that you all have pretty much made Kris‘ existence one of the best jokes ever to grace K-pop.

Starting with this one girl’s impressions of Kris. 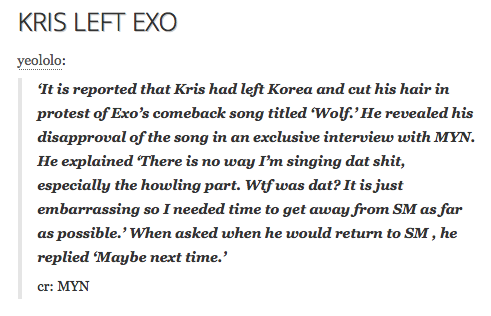 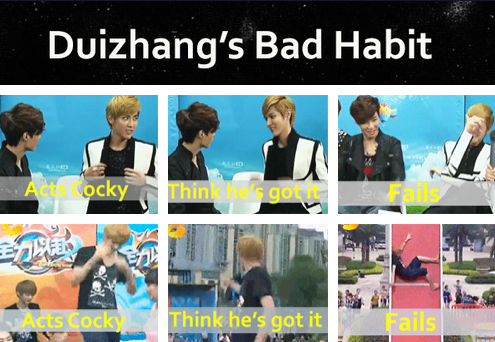 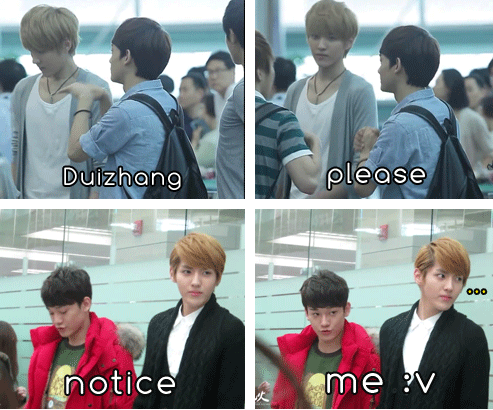 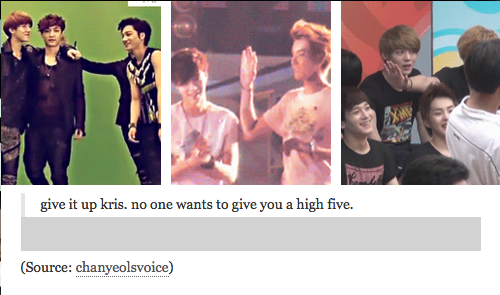 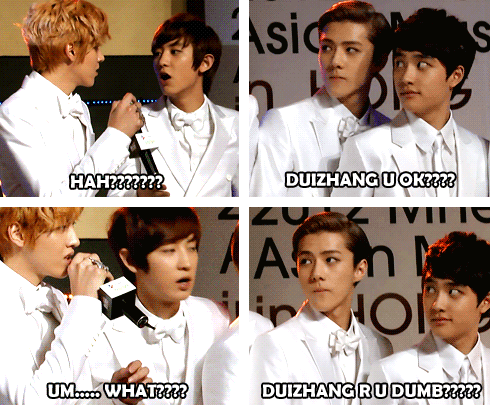 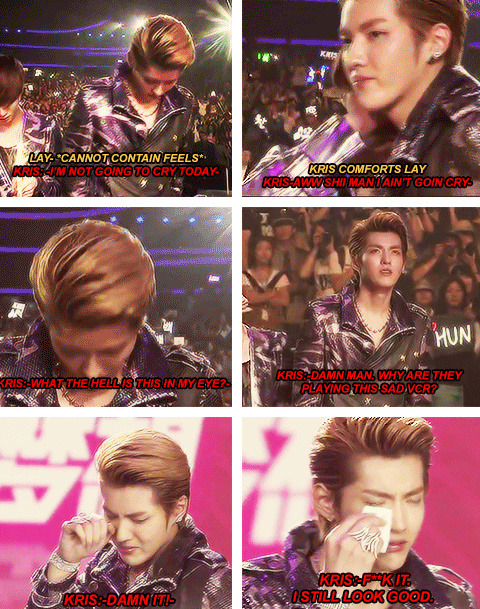 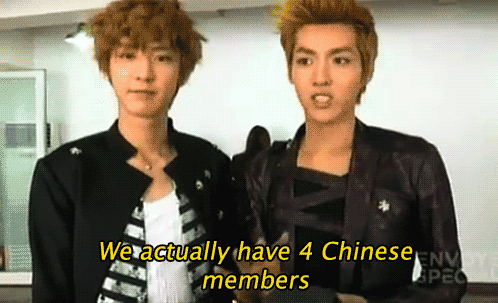 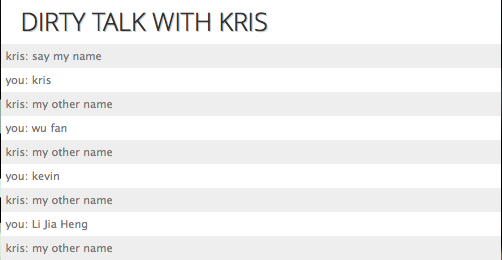 Of course this is not to say that other fandoms are not funny–the whole point of forcing you to realize that Exotics are perhaps more funny than they are vicious is to point out just how creative this group of individuals really are. In just one year, one year worth of activity, the Exotic fandom has reached levels of parody and ingenuity the likes of which I have never experienced before in all my years as a K-pop fan. We have to at least give them that.

Now I’m not trying to put down other fandoms or whatever else you could possibly insinuate about me highlighting the awesomeness of the Exotics. Another reason I thought it may be worth mentioning all this is because we spend so much of our time hating on Exotics, all the time, about nearly everything they do. I didn’t mean to make this article look like my personal Tumblr dash of dark EXO humor, but for all intents in purposes, my personal experience has shown me a completely different world of Exotics than the vicious, seething fangirls and fanboys the Exotics are supposedly notorious for being. I figured, as a fellow fangirl, it was my duty to share this with you all. To remind people that there are two sides the coin; for the Exotics, this means one side is fanatically terrifying, the other sexually frustrated and unceasingly hilarious. So pick your poison.

And, for the future, when you decide to judge an Exotic, ask them to tell you a joke first. If they reply with “maybe next time,” know you are in good company.