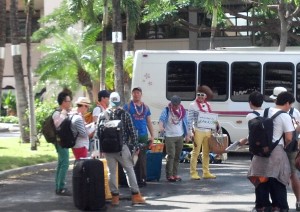 Spring is almost here–did everyone remember to roll forward your clocks yesterday for daylight saving?  It was a fun weekend in Hawaii, as fans were able to see the Infinity Challenge cast (Yoo Jae-suk, Park Myung-soo, Jung Jun-ha, Noh Hong-chul, Jung Hyung-don, HaHa, and Gil) and crew land in Hawaii to film a special–too bad the day they came was the start of two days or torrential rains–hopefully they’ll still have a successful shoot.

The following are what I think are the top 5 Things that happened in K-pop last week.  If you’re not up-to-date with your K-pop–get with it!  Spoilers ahead so turn back now or forever hold your peace.

Well, on We Got Married Sunhwa and Kwanghee were trying to see if they could handle “Other Parents’ Problems” as they tried out their parenting skills on the Moon brothers: Mason, Mavin and Maden.  They were doing well keeping the boys entertained until Maden needed a diaper exchange. Kwanghee left Sunhwa in charge of the change–although she didn’t quite know how to and was a tad scared and embarrassed changing a little boy’s diaper.  Luckily she had some advice on how to do the change… from Maden himself.

Last Week’s top 7 for Weekly Idol were for the top idol fans, the top seven were: #7 Teen TOP‘s L.Joe and his adoration for Big Bang‘s G-Dragon, #6 2NE1‘s Sandara Park and her idol Lee Hyori, #5 MBLAQ‘s Mir and his love for g.o.d., #4 BEAST’s Kikwang and his admiration for Rain, #3 KARA‘s Gyuri and her fangirling over H.O.T.,  #2 SHINee’s Key and his love for his sunbae BoA, and #1 INFINITE‘s Sunggyu and his worship of label mates Nell.  B.A.P. were also on the show where they cracked up laughing most of the time with Jung Hyung-don and Defconn and showing off some of their more useless skills. But the funniest part of the show was when Hyung-don, Defconn and their idol sidekick, BTOB‘s Il-hoon, showed off their skills, or lack thereof.

3. Dancing with the Black Widow

Dancing with the Stars Korea season3 has a great bunch of stars competing this year including miss A‘s Fei, MBLAQ‘s Seung-ho and the star I’m most interested in seeing–Jeanette Lee.  Many of you might be wondering “who is Jeanette Lee?” Only one of the baddest female professional pool players there ever was.  She is a Korean-American from New York who dominated the sport in the 1990s winning many championships and awards earning the nickname of the “Black Widow” because she would “eat you alive” at the pool table. She seems really nice and excited to be on the show, hopefully she and her partner will be able to have a successful season… or else I worry for him.

I’m really liking the place YGE is taking Lee Hi.  They’re eschewing the normal K-pop sounds and giving her songs that really complement her voice.  I love the song and the MV was enjoyable with the G-Dragon and Taeyang inspired teddy bears.  The one thing I do not like is the styling they do for Lee Hi– the clothes and the hair in that pink outfit? What were they thinking.

One of the faves from the start Two-thousand Won seem to have a little bad luck on K-pop Star 2.  They’ve done well on the show, other than their unfortunate habit of picking wonder kid Bang Yedam.  Although they lost to Yedam in the match up, they still made it to the Top 5 with this fun performance.