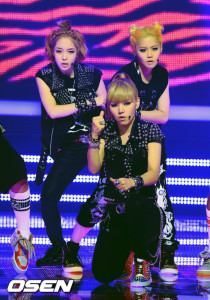 D-UNIT, the not-so-girly girl group from D-Business Entertainment, has returned with their second full album, Affirmative Chap. 1, and their new MV track, “Talk to my Face.” The title track for this promotion was more anticipated than either of D-UNIT’s previous MVs because Zico of Block B was confirmed as the producer even before teasers were released. Not only is this beneficial for D-UNIT because Zico is known to be a talented music creator and producer, but also because his participation in the album may cause some of his fans to listen to D-UNIT, which they might not have otherwise.

When I heard that Zico was working on this track I had some preconceived notions about what the MV and song were going to be like, and I have to admit that “Talk To My Face” is not what I was expecting. D-UNIT’s image up until now has leaned toward tough and androgynous (unlike most girl groups out there) and considering Zico’s tendency towards dark humor combined with hip-hop it seemed like the two would fit well together. Rather than their collaboration building on the image D-Unit already had, however, “Talk To My Face” goes a completely new direction for the group.

If you were a fan of D-UNIT’s original image, this new one may come as a disappointment, because although they stay true to their semi-androgynous, no-high heel wearing, tough girl image, they have certainly injected a larger dose of “cute” into this MV. The other change for D-UNIT comes in the form of their new fourth member, Jney. Originally a trainee with GP Basic by the name Janey, Jney was marketed as the “beautiful” member in D-UNIT teasers before her name was released and, if this MV is any indication, her image and personality suits this cute side of D-UNIT quite well.

The group dynamic doesn’t feel awkward even though a new person has joined. This may be partly because Jney is much younger than all the other members, so they don’t need to feel uncomfortable around her. Long term, her age could turn out to be a good or bad thing for the group, because although her age will give her a secure role as the cute maknae she may also be forced to do more chores and dirty work (but that depends on the personality of the other members, so who can say). She is fulfilling the role of visual and rapper, according to information released, and the group now has the right number of members to have each letter of “D-UNIT” visually represented by one of their faces in their MV intros; now that’s some clever marketing. 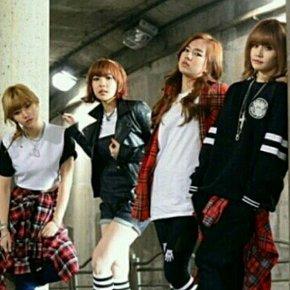 As for the MV, it is a classic story of a relationship going through a difficult period. After a certain amount of time the initial giddy romance has subsided somewhat and those honeymoon feelings give way to either deeper feelings of lasting love or to a lackluster, lazy relationship that is no longer fulfilling. The idea in this MV is that the girl is unsure about the status of the relationship and, although she initially thinks it is the sinking-ship type of relationship, her boyfriend comes around and proves that he still loves her. For D-UNIT’s image, however, it almost would have seemed more appropriate for the girl to leave the loser guy and be happy on her own.

When the members come in and are beating the guy up with toy hammers, it seemed to reflect female empowerment in a relationship was the way the story was going, especially since the lyrics are, “you just look at me, you don’t wanna to talk to me,” however, as the MV reaches the half-way point an awkward transition occurs and suddenly the main girl character isn’t standing up for herself anymore, she is pouting alone in a corner. Let’s talk about that transition in terms of plot and videography for a second.

Up until that point there was a clear theme of the girls confronting the guy (tying him up and blindfolding him so he is forced to listen to her and not look at her), but all of a sudden the two main characters plop down on a sofa in a different room. The most confusing part of this is that he is still wearing the blindfold. There is no clear reason for this switch in set to happen so suddenly and no clear reason for the plot to switch from fun and powerful to mopey and brooding. The plot point may be that she is equally at fault for not talking to him in that situation and simply assuming he lost his couple ring, but the transition to get to that point is disjointed either way. The decision to have them change rooms, clothes, and attitudes moves the story along, but the fact that he is still wearing a blindfold and looks confused about the transition, but she doesn’t, makes no sense story-wise. 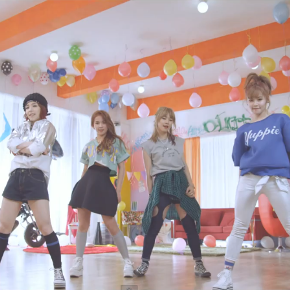 As far as theme goes, although this is a drastic change from their previous monochromatic MVs, the bright colors and fun props, the neon yellow hand on a stick and silly string for example, are very aesthetically pleasing and work with the upbeat energy of the song. Putting all the image comparisons aside, the sets and props for the MV all work together, with a bright primary color theme. Although the song and concept are cute, the set stays at a good level of simple and clean looking while still achieving that environment of brightness (unlike some MVs where the cutesy props are piled on so thick you can’t even focus on the group).

The outfits are a pretty typical of hip-hop female K-pop groups; converses instead of heels, bandanas everywhere, and pseudo-feminine bottoms. Jney is the first one to wear a skirt in a D-UNIT MV, which certainly pushes the wardrobe choices into more feminine territory than before. The leggings with the giant holes in them that Zin wears, for example, are certainly feminine in that they are exposing the thigh region in a sexy way, but the sexiness of the tights is offset by the flannel tied around her waist. This is pretty much the standard for this MV, some more feminine items of clothing but still combined with the more androgynous fashion D-UNIT is known for. 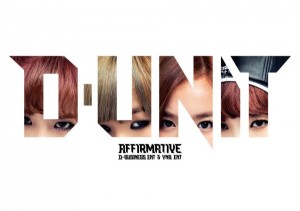 The dance could have had more screen-time, but the story took a front seat for D-UNIT this times around so the dance sections shown were shorter than in their past MVs. The choreography has the same feel as their previous dances, which creates some continuity even in this cute concept. Their posture is sunk lower to the ground, as is common with hip-hop and boy group choreography, and there is a lot more leg work than in groups where high heels are the norm. Speaking of the leg work, the raised-leg wiggle-shimmy was a particularly fun move. D-UNIT always has attitude while doing their choreography, no matter what it is, which is certainly a strength of the group and one of the reasons watching them dance is enjoyable.

If they continue with the cute concept for future work, Jney will turn out to be an asset for the group as her “cute” facial expressions were by far the best (and by best I mean most stereotypical) out of the group. Other than that, although I liked their “tough girl” image from their first two MVs, this new image isn’t anything to dismiss just because it’s girly. “Talk to my Face” has a catchy beat and catchy chorus, especially since English-speakers can sing along, and the cuter concept didn’t feel awkward or out of place on D-UNIT, just different. In the end, despite all the comparison, it was a fun MV and a fun song which will probably bring in new fans that prefer the brighter concepts over the darker ones D-UNIT was showing before.