Is Woollim Changing Its Taste?

I have always had some sort of respect towards Woollim as a company. They manage(d) two of my all time favorite Korean bands, Nell and Epik High — this one until they totally screwed it when Tablo was in trouble, which honestly decreased my respect a bit — and they successfully got into the idol territory with Infinite. They were inbetweeners in an industry dominated by the ‘Big Three’ and companies alike, keeping some non-idol acts — Nell and former Loveholic member Jisun — while promoting Infinite, that at the same time got favored from this status by getting songs written by Epik High and Nell members and that somehow made a difference with other similar idol groups.

And just when everybody was expecting the debut of their long-announced girl group, Woollim unexpectedly debuted Tasty, a dance duo comprised by twins Dae-ryong and So-ryong.

Spectrum sounds overall generic, and I would even dare to say it isn’t a problem of the production nor the twins, but a producer/artist mismatch. I had actually some expectations when I heard Rphabet were going to produce the album, being a relatively new team but with nice previous collaborations with M.I.B and San-E. However, they don’t seem to work well outside the hip-hop context — Alexander‘s album, I’m looking at you — and they definitely haven’t found Tasty’s style.

The intro song, “Spectrum”, has a nice beat-boxing part, which sadly won’t have its reflection in the album itself. “Buster”‘s base sounds like it could have been an M.I.B song, so although the track isn’t bad at all per se, the boys’ rapping skills are pretty mediocre and their rapping doesn’t have personality enough as to make a hip-hop song work. The beat is the best part of the song, and that says few in favor of the guys. “Solo” is pretty plain, but could be used as a starting point to direct Tasty’s style towards more R&B sounds since their singing works much better than their rapping. And “You Know Me” is a questionable choice for a title track: it does work live combined with a matching choreography, but when only listened gets awfully repetitive, so even if they’re labeled as Asia’s no.1 performance duo (a bit pretentious, maybe?) they shouldn’t forget a song must be consistent when listened outside the live performance context.

“You Know Me” is also probably one of the title tracks with less actual singing I have heard in K-pop — not because of an excess of autotune but because of the fact that half of the song is instrumental and the other half a repetition of the one line that conforms the chorus. It’s pretty obvious that Woollim intends to put the emphasis on the boys’ dancing skills, seeing their extensive background as backup dancers, besides their synchronization and the fact that they are twins as a marketing strategy itself, so pretty much “You Know Me” is a really long dance break. Which is a pity because their sunbaes of Infinite showed that a band can be promoted as a dance group and still maintain a consistent musical quality and style. 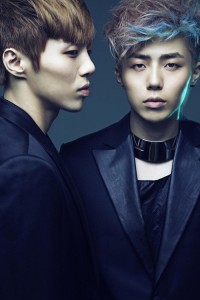 And because of the fact that I consider myself a Woollim fan, I can’t help but feel disappointed with the fact that “Spectrum” is the first album from a Woollim artist that I dislike. But also because I’ve been into K-pop for some time now, I’m well aware that Woollim have its reasons for such a sudden debut.

Tasty’s debut means that now Woollim has the same amount of idol acts than non-idols, and taking into account that they got to manage even eight non-idol acts — such as Kim Dong-ryool and Strawberry Fields — and now they only have Nell and Jisun under their label, it seems pretty obvious they are heading towards the idol business. With the debut of Tasty, Woollim not only expands their roster (both by number of artists and by musical variety), but when the girl group debuts they will be at the same level roster-wise than some well-established idol companies — there is an unspoken rule that an entertainment company focused on the idol market must have at least three acts, a boy group, a girl group and a solo artist or a duo, see TS Entertainment, Starship Entertainment or Cube pre-BTOB.

I can’t really blame them for wanting to re-orient their business (or at least expand it), especially since their non-idol acts haven’t suffered from mismanagement — Jisun hasn’t released any material in a while, but Nell’s comeback was properly produced and promoted, with a high-budget (and delightful) MV and a big share of exposure. But on the other hand, it’s this inbetweener status that makes Woollim special and it would be a pity if they lost it. Besides the fact that I’m hoping for another song composed by Lee Jung-hoon for Infinite’s next album.

On another note, I can’t wait to know the name of their official fanclub; if awesomely absurd enough (and with a band called Tasty I can only expect awesome things) I will probably become an instant fan and take back every single complain about their rapping skills.