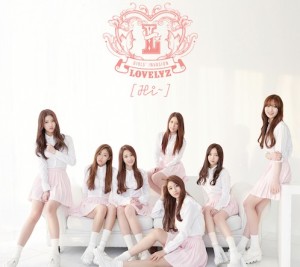 Woollim Entertainment‘s girl group Lovelyz has returned with their second single, though not without a slight alteration from the last time we saw the girls. The group is promoting as a seven-member set, and member Seo Ji-soo is nowhere to be seen. Despite Woollim’s decision to keep quiet about her disappearance, it’s almost certain that her absence is due to the rape allegations that surfaced just before Lovelyz debuted last year. Ji-soo has not left the group but will most likely cease public activities until the investigation regarding her charges is completed.

Although this scandal generated most of the buzz surrounding Lovelyz’ debut, Woollim has obviously attempted to refocus attention on the remaining seven members by keeping Ji-soo from participating in the group’s comeback. Out of respect to the rest of the girls in Lovelyz then, it’s only fair to judge their newest song and MV with impartial eyes.

Their lineup may have changed a bit, but their new track “Hi~” is not a huge departure from their debut with “Candy Jelly Love.” That’s not exactly a bad thing; consistency is sometimes hard to come by in the K-pop world, especially with the current trend of girl groups taking on increasingly sexier concepts. Like their male counterpart Infinite, Lovelyz is setting itself up to be a group that sticks primarily to one musical style and executes it quite well. Their success, then, will depend mostly upon whether people like their style.

A quick look at the MV for “Hi~” will plainly reveal that Lovelyz is going for an innocent, cute image. Quaintly-styled rooms with floral wallpaper or virginal white walls serve as the backdrop for the youthful, girlish activities the members perform. They spend a lot of time wistfully staring at walls or windows, though a few ladies get a little wild by blowing bubbles or even taking naps. Besides Mi-ju‘s loving embrace of a teddy bear, there are no traces of human contact. Overall, the video seems sterile and staged, a disappointing contrast to the slightly mischievous, friendly interactions between the members in “Candy Jelly Love.” In “Hi~,” none of the girls’ actions look genuine, and though you know the MV is supposed to be cute, it ends up being mostly mundane. 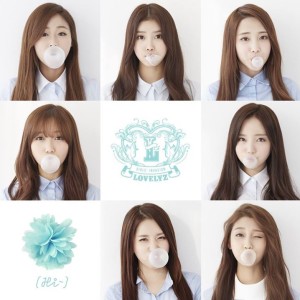 Flower petals and bursting bubbles serve as motifs that link scenes together throughout the video, but if these motifs are meant to be symbolism, the effect is lost. There almost seems to be a plot waiting to come out when Mi-ju and her teddy bear both start to float away, though this too is revealed to be meaningless. These attempts at deeper meaning are disappointing because they represent moments of potential in the MV — the beautiful set, the attempts at symbolism, and the sparks of creativity all point at the possibility of something greater.

That’s a shame, especially in this case, because we have seen what kind of concepts Woollim can create for Infinite. The dance is lackluster as well, another disappointing fact considering the choreography we have seen Infinite pull off. It’s honestly a bit frustrating. I don’t expect Lovelyz to become a female copy of Infinite, but there isn’t any reason why Woollim can’t give the girls interesting, unique material. 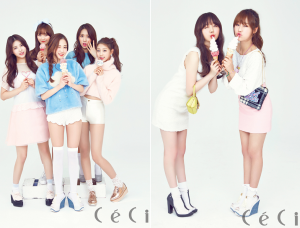 Like “Candy Jelly Love,” this is a song that will grow on you as you listen. It’s not a bad song by any means, nor is it boring, but it becomes repetitive after the first chorus ends. There is little variation in the track itself, and it offers very few opportunities for the girls to show off vocally. As a result, the song hits its crescendo when the first chorus hits and never rises above that point. Because the song lacks a true climax, and the sound really never changes, it’s easy to get lost and be surprised when the ending comes. The music does, however, fit well with the sugary-sweetness of the lyrics, which tell a generic story of a girl confessing to a love interest.

Overall, “Hi~” is fairly basic. If the girls of Lovelyz have interesting personalities, you wouldn’t be able to tell from the video. If they are great dancers, the evidence won’t be found in this choreography. If they have impressive vocal abilities, this song surely doesn’t show them off. Lovelyz seems to be just average, though there are glimmers of greater capabilities that leave me hoping for a more interesting concept in the future. If Woollim hopes to make their girls into a competitive force that can contend with other cutesy groups like old favorites A Pink and new contenders G-Friend, they’ll need to step up and provide Lovelyz with a song and MV that can truly let them shine.