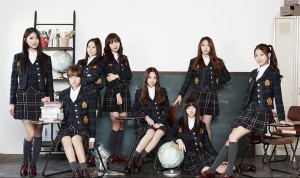 In spite of the police investigation surrounding member Seo Ji-Soo’s alleged criminal past, Woollim Entertainment’s Lovelyz released their debut album Girls’ Invasion earlier this week. The nine-track album joins the pool of November girl group releases, facing off against EPs and albums from AOA, Hello Venus, and A Pink.

As Woollim’s first girl group and third idol project overall, Lovelyz was in the works for years, with leader Baby Soul training for five years, and visual Yoo Ji-ae and vocalist JIN both training for four. Solo singles, music video cameos, and variety show appearances sated eager fans for the last three years. Fans of Infinite came to expect strong choreography and dramatic, powerful songs from the yet-to-be-named girl group, dubbed ‘Femfinite’ in some internet circles. Girls’ Invasion is their long-awaited debut, but instead of powerful hook-filled pop, the album is filled to the brim with mediocre saccharine sounds and rehashed singles.

Girls’ Invasion can be divided into two halves: the group’s songs, all composed and arranged by OnePiece, and the members’ solos and duets. Do the math and you’ll realize almost half of the album had been released long before the group’s debut — a full 50% if you don’t consider “Introducing the Candy” a full song. For the uninitiated, pre-debut release dates won’t matter, but it may feel like a cop-out for those who have followed the group for years.

“Introducing the Candy” is the album’s opening track. The instrumental intro isn’t particularly offensive, and it serves its purpose in highlighting the twinkling pianos and synths that will come to dominate the top half of the album, but the producers missed the opportunity to insert a fresh instrumental.

The album’s second track is lead single “Candy Jelly Love,” a synth-heavy, sugary track with the potential to grow on the listener. Key word: potential. Its fault lies in its fixed nature: there is no drastic key change, no glory note, no closing ad-libs. “Candy Jelly Love” crawls along at the same pace for nearly four minutes, with its first chorus coming in after a full minute. As a B-side or a filler track, it would have stood out as a strong song for its solid production, but as a lead single, its offers little to the casual listener. A middling grower is a poor choice for lead single, especially for a new group that can’t be redeemed by past singles.

“Goodnight Like Yesterday” is a sweet ballad designed to show their vocal prowess, but the vocals felt strangely restrained. The instrumental builds upon the definitive Lovelyz sound, with the synths giving the ballad a delicate air. “Goodnight Like Yesterday” served as Lovelyz’ pre-release single, and though it doesn’t reinvent the pop music wheel, it’s a decent enough vehicle for their exposure.

“Goodbye Chapter 1” is a magical girl anime theme song bursting with energy but ultimately lacking in memorability — I needed to listen to the song five times to retain its melody. Perhaps it’s the song’s brevity: it clocks in at 2 minutes and 43 seconds, barely giving the listener time to fully embrace it.

The saving grace of the album’s first half is “Getaway,” a song in the same quirky-cute vein as f(x)‘s “Sweet Witches.” The non-traditional melody, the hypnotic refrain of “my lies, my lies,” and the grab-bag of sound effects make for a fascinating song. 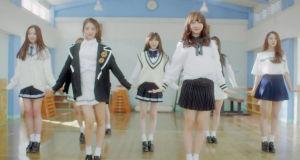 Following “Getaway” is Baby Soul’s rock ballad “Stranger” featuring a barely-there Wheesung, waking us up from the bubbly Shibuya-Kei pop spell with power vocals and guitar riffs. The juxtaposition of “Getaway” and “Stranger” epitomizes the clunky two-sided nature of the album. A better choice for transition track number five would have been Yoo Ji-ae’s sweet, airy “Delight,” a song closer in nature to the works of OnePiece. “Delight” is the work of Han Jae-Ho and Kim Seung-soo, better known as Sweetune. With her whispery cover of Infinite’s “She’s Back,” fans wondered if Ji-ae could pull off an entire song by herself. Though her voice is thin, notably in its higher register, it doesn’t detract from the vibrant, fast-paced song.

Next is Kei and Baby Soul’s “She’s a Flirt” featuring Infinite’s Dongwoo. “She’s a Flirt” is remarkably the only pre-debut single remade for Girls’ Invasion due to the departure of original vocalist Yoo Ji-a. Kei and Baby Soul confront a good-for-nothing boyfriend over a smooth R&B instrumental, their voices blending together delightfully and harmonizing at the very end in place of the strange auto-tuned ad-libs that ruined the original version.

Closing the album is JIN’s “Gone,” a song that would serve more of a purpose on a drama soundtrack. JIN has a beautiful voice with a nice amount of power behind it, but the unoriginal instrumental bogs down the song. The song sticks out like a sore thumb, even when preceded by another outlier. 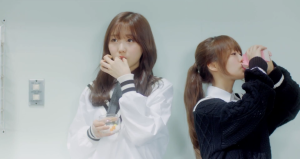 This group’s synth-heavy J-pop influenced songs help differentiate them from reigning queens of cute, A Pink, who recently have taken their cues from cutesy 90’s and early 2000’s K-pop. The J-pop influences are evident throughout the first half of the album, but consistency and novelty don’t equate to actual musical quality.

The members of Lovelyz are capable of more than what Girls’ Invasion displayed, especially vocalists JIN, Babysoul, Kei and Su-jeong. Their a cappella covers of Little Mix’s “Word Up” and Taylor Swift’s “We Are Never Ever Getting Back Together” showcase the girls’ true vocal abilities. Even Ji-ae, who is noticeably their weakest vocalist, can sing well within her range. The often-utilized breathy singing style masks their vocal colors, making their voices nearly indistinguishable from one another.

Cute concepts have gotten a bad rap in the international fandom, and this album’s mediocrity may just be chalked up to the restrictive trappings of “cuteness,” but let it be known: cute doesn’t equal boring. Cute songs can be impressive and innovative, just as sexy songs can be dreadful or lackluster. The visual concept isn’t the issue here. Though the cute, refreshing concept might follow them for a few years (or until Su-jeong and Ye-in become of age), it doesn’t necessitate the group’s snooze fest songs.

My advice to listeners: download “Getaway,” “She’s a Flirt,” and “Delight.”

My advice to Lovelyz: call up Sweetune and let them work their magic.