Of LOEN’s Summer Album And A Japanese Hot Summer

For most of us, this Summer would probably be defined by sweating (or chilling) it out, enjoying a fair amount of Olympian feats on the TV and checking out the Summer releases. While there have been some high profile releases (most notably Sistar’s), there are some that sadly get overlooked, largely due to the lack of media attention. Hence, it’s nice to use this summer to review some summer releases, as well as re-visit the Japanese version of last year’s summer anthem.

A good example of an under-rated release would be LOEN’s Summer Album, which garnered attention largely for the single featuring IU and LOEN’s new girl group FIESTAR. While “Sea of Moonlight”, with its 80s style synth-pop sound and light vocals, did adequately capture the feel of summer, there were other tracks just as worthy of one’s attention.

For one, there is “Take Out”, a collaboration between the Brown Eyed Girls’ Ga-in and Ra.D. Kicking off with a very nice Bossa-Nova esque opening, the song switches very smoothly to a acoustic-guitar driven sound for the bridge and chorus. Couple that to the breathy vocals by those involved, and this is a song that evokes very nicely another side to summer – the one that involves just relaxing in the shade, or using the time to seek out new loves.

And seeking out new loves is what the song lyrics are about, with the man trying to set up a date with the woman he hopes to meet, with her unfortunately being unable to set time aside for it. Still, the song serves as a very nice listen for those who enjoy their summers laid back.

Also opening with a relaxed, piano-driven intro would also have to be Sunny Hill’s “Brave Girls” with ZiA. However, compared to the previous track, the song cuts quickly into an up-tempo pop song on escaping the crowd and just having fun for the time being. While the song did not have anything particularly outstanding to it, at least the song was a reasonably inoffensive and straight forward listen. 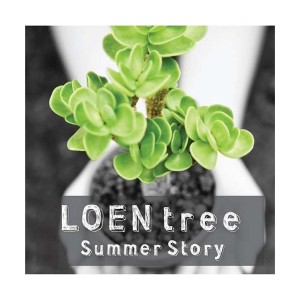 y off beat but nonetheless enjoyable addition was that of G Gorilla’s “Run to The Moon”, being a pop-rock number that evokes memories of seaside adventures and road-trips (or at least, ideas of what they are like).

However, I could not care for the electronic remix of IU’s “You & I”. For starters, the song sounded like it was just an techno/electronic track layered beneath the original song, which was probably the laziest way to approach any remix. Besides, given how the original could have qualified as the least suitable song for any club (besides a chilled out one), the remix seemed quite pointless. If there was one positive, it was how for the original song stayed largely intact, with some of the electronic elements complementing the song. That still does not hide the fact the remix strayed pretty near filler material for the album.

Summing up, while the album was slightly marred by dull production, it did a perfectly serviceable job of evoking the various moods of summer and contained some hidden gems. For that, the album scores a 3.8 from me, and was a reasonable listen for the summer.

Speaking of summer listens, it was hard to deny F(x)’s “Hot Summer” being the definitive tune for the 2011 hot season. Now that Avex Trax (F(x)’s Japanese management firm)  has chosen this song for their Japanese debut, it also serves as a good time to revisit the Japanese version for the summer of 2012.

Unfortunately, the whole thing did not seem too inspired. The sets largely consisted of an SM interpretation of a futuristic desert and what could have been used previously for  “Electric Shock”. 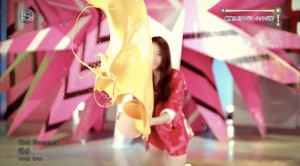 Not really helping matters are the lyrics. While they do stick to the song’s original spirit, the simple Japanese in the chorus and Korean-esque pronunciations betray too quickly how little Japanese F(x) are expected to know just to get by for their Japanese promotions (and possibly how little groundwork was done for the release).

And quite possibly winning the award for Most Baffling Use of CGI would definitely have to go to the scene where the girls throw buckets of paints around, and diverting the paint with their hands, not getting dirty in the process at all. About the only plausible reason for this scene would be to add a dash of colour to the Music Video, which up to that point only consisted of white, blue and pink.

But by far the greatest issue with this song was how much of a wasted opportunity it could have been. For its lyrical content, the song could have been very well the most appropriate for a tie-up with a large scale endorsement, like a water park in Japan. Instead, all they got was this, background music for an up and coming resort.

It’s very hard to blame the girls for such an uninspired MV and wasting what could have been one heck of a niche song that would sell for being featured in some high profile commercial, but as it stands F(x)’s debut into the Japanese market was pretty mediocre, and gets a 2.0. Still, maybe with some better material (or promotional efforts), don’t bet against things changing.

And that was the summer in music for me. How about yours, Seoulmates?