Summer has come, and with it the time for summer-themed MVs. If some weeks ago it was Sistar with “Loving U” that brought us an aegyo-filled MV full of summer scenes, now it’s time for Brown Eyed Girls. With a very different approach, “One Summer Night’s Dream” feels like the end of the summer: bittersweet and nostalgic.

Shot between Japan and Seoul, “One Summer Night’s Dream” features Narsha as she flips through the pages of her past diary remembering a summer love in Japan when she was younger. The scenes with Narsha were shot in a coffee shop in Seoul while the love story happens fully in Japan. The story is very drama-like: a young girl hurts her foot and randomly stops a guy in a bicycle to carry her — I would say it’s a quite silly storyline if it wasn’t like fouling my own nest — and then love flourishes until the girl has to leave. There’s even a piggy ride, in case you weren’t convinced with the drama-like argument. And just like the typical drama, everything cheesy and awkward… but cute nonetheless. 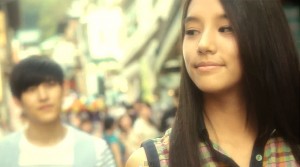 The MV, however, tells the story from the point of view of a grown-up woman who is remembering the sweetness of her summer love, instead of focusing on the sadness of the lost love. At the end of the MV, it is revealed that the diary does not belong to Narsha but to JeA — who, by the way, looks beautiful with that hair (not that Narsha doesn’t look beautiful too) — and, as a wink to the fact that JeA herself composed the song, the end of the diary contains the sheet music of a song based on that experience: “One Summer Night’s Dream”.

As for the love story itself, I’m not really fond of the main actress, she’s pretty and photogenic, sure, but she’s also awkward most of the time, like when they kiss for the first time or when she gets hurt in the beach — her faces sometimes are just hard to interpret. The actor that plays the male character is actually not much better, but the poor acting is less noticeable since he barely appears in the MV. I don’t know if the girl is a trainee under LOEN Entertainment, but if so, I really hope she debuts as a model or a singer. Or that she gets a bit more training before debuting, maybe. 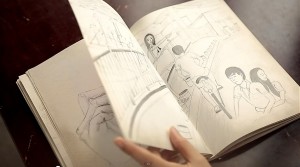 I am, however, keen on the drawings, a really nice detail. I’m digging the naïf style, they look fresh and youthful, just like they could have been done by a young girl as a summer dairy.

The photography is quite nice, excepting some over-used filters at some points. But maybe I have to give some credit to Japan itself, who always manages to look beautiful in the MVs — the scenes in the streets reminded me a lot of the clean shots in Infinite‘s “Lately.” Unfortunately, as I mentioned before, the use of filters is often unnecessary and excessive, like the uneven blurry in most of the scenes — kept me wondering if there was something wrong with my screen. Or my eyes; the orange in the goodbye scene and the blue in the beach scene (because seriously, her face being blue doesn’t look very natural). The lighting in the sunset scene is also a bit corny, and it looks a bit too fake as compared to the more natural appearance of the rest of the MV.

“One Summer Night’s Dream” is not as intense as “Cleansing Cream” or “Sixth Sense,” but it’s okay to do light-hearted MVs once in a while, especially if they are like this one. It may not be perfect, aesthetically or acting-wise, but it manages to convey the feelings of a young summer love: the sweetness, the melancholy, and the certainty that summer, as everything, always comes to an end, but something else will come after.