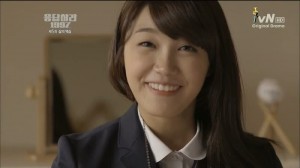 I love the Olympics, but I will have to say that I’m glad that it’s over so that we can get back to our regular broadcasts of K-pop goodness. What happened in K-pop last week that could compare with watching Misty May-Treanor and Kerri Walsh-Jennings win their third straight Olympic Gold medal in Beach Volleyball? Well, there was: Supernova‘s comeback with “She’s Gone,” Eru’s release of “I Hate You” featuring Beast‘s Jun-hyung, Woollim dropped a Tasty new duo, Nu’est is “Not Over You,” Double K Crew and their rookie rapper Kwon Hyuk-woo were crowned the champions on Show Me the Money, and Super Junior got their “Spy” on.

What 5 Things happened in K-pop last week that I think were a little bit more special than the rest?  Keep reading to find out and as usual, if you’re not up-to-date on your K-pop turn back now because spoilers most definitely will ensue. 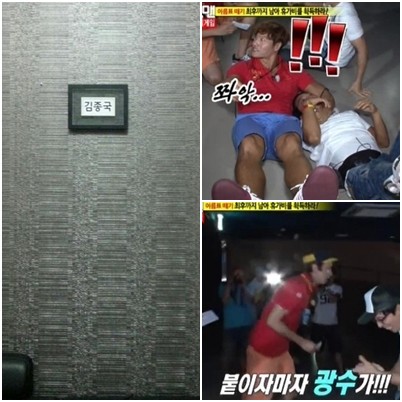 As a staunch Running Man fan, there was no way that I could not include this on 5 Things. Last week through his twitter, Lee Kwang-soo shared a picture of Kim Jong-kook‘s name tag, which his mother framed for him, hanging on a wall.  He got Jong-kook’s name tag by betraying him on the first Running Man episode with Han Ji-min which aired on the 5th.  Of course Jong-kook vowed revenge which led to Kwang-soo hiding in the dark in this week’s episode.

It seems as though my fellow writer Paloma’s wildest dreams have become reality.  She wrote of the potential of the Infinite Sub-unit Infinite H made up of Hoya and Dong-woo.  While their performing and/or releasing material as a sub-unit is not quite a reality yet, there is talks going on for it especially after getting much love and support from fans for their previous forays at concerts. At Infinite’s That Summer Concert last week, the duo performed a new song “Without U” which was produced by two of Korea’s hottest hip-hop producers Primary and Zion T.  If ever theory should become reality, this most definitely is it–come on Woollim, we want Infinite H stages!

There’s a tough crowd out there on Jeju-do. As part of a mission on Running Man, with guests actress Han Ji-min and MC Kim Je-dong, the running men were put at random tourist stops around Jeju and needed to give away thirty autographs or ‘sign’ as they call it.  It was slim pickings at first with nary a fan in sight to give a sign to–until school let out and mini hordes of school children lined up for their autographs and a chance to… you just gotta watch, it was fast yet hilarious and if I had the chance I’d probably try it myself.

Although there was some hype about this coming of age mini drama on tVN it didn’t get much love at first, but when something is good word spreads.  I actually watched the first two episodes when they came out, but it wasn’t easy to find and there were no subs, so I kind of put it on the back burner.  Fast forward two weeks and I find that my fave K-drama recappers are recapping it and a legit K-drama channel is subbing it, but unfortunately the subs are coming out about a week late.

The story reflects on the life of Sung Shi-won (played by A Pink‘s Jung Eun-ji) whose whole life revolves around her love for H.O.T. and Tony An (who makes a guest appearance) in particular.  Due to her devotion she barely has time for family, school and growing up.  Her friends made up of best friend  Mo Yoo-jung (Shin So-yool), top boy in school who she’s known all her life Yoon Yoon-jae (Seo In-gook),  Yoon-jae‘s BFF and resident sensitive guy Kang Joon-hee (Infinite‘s Hoya), motor mouth Bang Sung-jae (Lee Shi-un), and the cool new guy Do Hak-chan (Eun Ji-won).  The drama does remind me most of My So Called Life because of the angst, touching on taboo subjects, its great portrayal of an ordinary teenager’s life, and for showing real relationships with family and friends which isn’t all rainbows and unicorns, but yelling and screaming and disappointments, too.  The story flashes back and forth between 1997 and 2012, although mostly set in 1997.  What works is that secrets are mentioned in the future, then it flashes back to the past to explain why things are the way they are, then it returns to the future to reveal the answers and pose more questions.  I can’t wait for the last two episodes and really wish that it were a a full length drama.  You definitely must check this one out–although I might suggest waiting for all the subs to come out first.  Here’s a great little scene that shows when friendship changes to something more.

Or should I say finale!  After a two week delay due to the broadcasting of the London Olympics, fans were finally able to see the last two episodes of the K-drama, A Gentleman’s Dignity. In the last episodes we were shown how the F44 first met and became friends, one wedding, and one of the best proposals I’ve seen yet on a K-drama.  The drama wasn’t perfect, but what it was better at than any other K-drama I’ve seen was in portraying the lives of these four men who had weathered a lifetime of friendship and how even though they were all in their forties… they were all still boys at heart.  Though I enjoyed how all the relationships played out until the end one of the ones I was disappointed in was between Do-jin and Colin (played by C.N. Blue’s Lee Jong-hyun)–after they found each other Colin was mostly off the radar.  I’m glad the character got some love in the last episodes and another chance at showing off his singing skills.