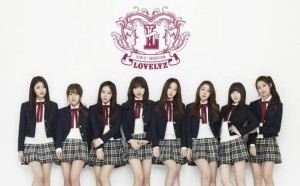 November seems to be the month for girl groups. Companies have been vying to squeeze in one last promotional cycle for established acts and debut new bands all in a push for the title of the next big thing. Woollim Entertainment’s latest group, for example, Lovelyz has been getting a lot of attention lately.

The girls have been a part of many activities prior to their debut. Members Baby Soul, Jin, Jiae, and Mijoo have participated in everything from solos, to subunits, to acting, to variety. Not all the pre-debut press has been positive, though, with some (yet unconfirmed) rumors regarding Jisoo casting a negative light over the group. However, the group’s pre-release track “Good Night Like Yesterday” serves as a good introduction to the vocal prowess and introduces their dynamic as an eight member group.

Before anything else, can we talk about the name Lovelyz for a bit? The “z” at the end of the word lovely made me cringe at first, but upon more iterations of reading and researching the name, I suppose it does make sense. Searching for the group is vastly easier to do with the unique spelling, and the name doesn’t particularly pigeonhole the group in any one area of performance style. Including the aforementioned members, Lovelyz is rounded out by members Kei, Soojung, and Yein.

At first glance, Lovelyz is reminiscent of some of their contemporary rivals. The goal in debuting any act is to establish the unique aspects of your artist, and although “Good Night Like Yesterday” is a ballad pre-release, it smartly gives a quality appraisal of the octet. The slower paced song is fitting for the autumn season and, in addition to being a timely song release, it shows off each member’s singing voice.

The song is divided up fairly evenly – presenting each member during their individual moments — but the composition isn’t particularly outstanding — being comprised of mainly of synths, a constant slow beat, and the members’ vocals. The singing is very delicate here which works well since the song is about a sad appeal to change the semantics of their goodbye, it attempts to touch on those sensitivities. In particular, Jin and Baby Soul’s voices felt the most genuine and compelling to listen to. 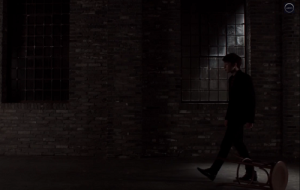 The music video is simplistic but subtle. It features all eight members and Infinite’s Sunggyu. The video plays with the theme of time and really utilizes lighting to get this message across to the viewer. Shadows of a cup and the light moving across Sunggyu’s face, as well as the lighting shifts behind each girl’s individual shots, give a nod to the lyrics of wishing a relationship could continue like the days of yore.

The lighting adds flair to the dramatics of the subdued song and is an understated way of illustrating the intention behind the lyrics. For example, there is a really cool moment where Sunggyu is walking backwards towards the lit parts of a room with darkness creeping across the windows and walls in front of him. That sense of being eclipsed by the darkened fate of an impending separation and hoping to remain in the brighter parts of the past is poetic, and one of the great things about this MV.

Another prominent aspect of the video are the flowers. Flowers are clearly important in this video and there is likely another story that could be touched upon there if you are familiar with flower meanings. I am not particularly good at identifying which flowers each girl is holding, but the petals give off a softer texture against the thornier branches that they are standing near. I wonder if they are possibly representing the fallen flowers during autumn — like how a tree sheds its leaves feels like a reformation period where they are to start anew.

Overall, this pre-release makes me more anxious to see and hear Lovelyz’s title song. (The teaser for their debut song “Candy Jelly Love” shows them steering towards a quirky cute concept). Woollim Entertainment has certainly been doing their best to market the girls as a brand. With some pre-debut recognition (although not all good publicity), Lovelyz has a slight leg up on other rookies. With the addition of an ornate heart shaped logo, Woollim Entertainment further adds another tool for setting Lovelyz up as the possible representative girl group. While the potential for greatness is there, “Good Night Like Yesterday” is still only a stepping stone in the introduction of these girls.