Leessang is a duo group that debuted back in 2002, whose unique style as well as their collaborations with a series of artists such as Drunken Tiger, Yoon Mi-rae and ALi were well-received by the Korean public. They are one of the few successful atypical K-pop acts. This month, they will celebrate ten years of activity with their eighth released album. The duo prepared their latest album for three years and their first promoted song from Unplugged is a remake of a song by Cho Young-nam, titled “Hard to Be Humble.”

The plot of the MV focuses on two kids, impersonating Gary and Gil. These children are simply too cool for routine activities, highly implied by their clothing and their mimics. The video starts with them running down some alleyway and switching from one place to another. When they hit the city, they appear as businessmen trying to look for something to suit their swagger. Different shots show them getting bored on the streets or in the parks, so they decide to go for something else. They start fishing from a ditch, proceeding right after to interfere when couples attempt to kiss. Observing the others, playing an instrument for money or performing magic tricks fails to entertain them, so they think of doing something more productive with their talents. The kids notice that a woman is being robbed and save her from the aggressors, wearing superhero capes. One thing that was a bit weird about this scene was the fact that one of the robbers, the bald man (also the director of the video), was wearing a cap where the word “foreigner” was written. Now, paranoia is no good, but what were they trying to do here? The association between ‘foreigner’ and ‘delinquent’ is obviously made. The humoresque nature of the video acts as a defense, as it seems absurd to look for deeper implications in such a fun and lighthearted video, but it was still uncalled for.

Skipping that, as the rhythm of the song accelerates, the kids continue on following the bad guy and slapping him repeatedly. Another scene shows them while slapping also some curious boys and girls looking at a bicycle. While the last chorus plays in the background, the young boys continue to have fun their way and finish a drawing of them as Supermen, writing also that being humble is hard.

The storyline is enhanced by some ingenious cinematography. The kids’ impatience to stand out is highlighted by rapid shots, skipping quickly from one sequence to another. They are on the lookout for something good enough for them, running down the streets being a recurring motive. Everything happens in bright daylight, and the lightning creates a jovial and playful atmosphere.

The action takes place mostly outside. The backgrounds vary throughout the video: playgrounds for kids, different types of buildings, bamboo fences, little cafeterias and back-alleys. The setting creates the illusion of a small, industrialized city: medium-height glass buildings, houses that require serious repairs — specific of a rural area, the empty staircases, the unpopular public places and the intimate shots of the couples contributing to this image. The decor is randomly placed on the streets, hinting at the carelessness the video shows at times. The humor results from the children’s acting. They strut and have a confident nature, contrasting with their obvious immaturity. Their boldness is depicted in the most hilarious ways: they glance in the mirrors, arranging their hair and checking their teeth. They put the sunglasses on and some of their outfits are reminiscent of the stereotypical hip-hop attitude. The single shots showcase them looking with contempt at the others around them. When the chorus kicks in, saying how hard it can get to be humble, the children are trying to bow in sign of modesty, but they soon get bored. The authority and the freedom that they have, interrupting the others while suffering no consequences (probably because of their age), represent the main appeal of the video.

The MV itself is childish at heart. It doesn’t have a profound message. Instead, it harmonizes with the lyrics. The song is entertaining, the authors claiming they are the best. This doesn’t occur in the same way as it did in 2NE1’s “I Am The Best.” The aggressiveness is replaced with a funnier approach and also some tongue-in-cheek parody of the current stereotypes:

I’m a successful, frivolous Oppa […] I’m a clown-like singer but I’m an innocent macho
Who enjoys magic-like art and romance.

The society’s way of dividing people depending on their social status is mocked in the video by the allusions to money and the way someone can believe that it is needed to have fun. But there is nothing dense here. Everything is well-dozed to avoid the useless charging of the song. The main means used to send the message to the public is humor. They oscillate between the mention of more serious topics and derisory bouts of self-praising. The idea is to have fun, and to embrace life wholeheartedly, thinking you are able to do whatever you want to. The man sitting in front of an easel and the two kids playing guitar allude to the duo’s artistic belief: 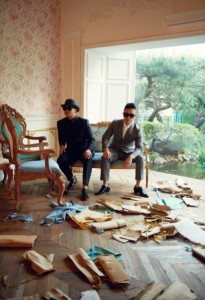 I lived like this for ten years so I’m not afraid of anything
I’m not jealous, I enjoy living life my way
My color, my lyrics, my music, love, my ideas, my life

The video and the song don’t talk about boasting what you don’t have and unreasonably feeling entitled of more. “Hard to Be Humble” could be called motivational. Taking pride in your work and talent, whatever those might be, is encouraged and legitimate. The reference to “haughty-looking ladies” suggests that arrogance is not the point here, but rather being at peace with yourself and prepared to enjoy life as anyone deserves.

However, this is also a flaw of the video: the emotional delivery. While delightful and lovely because of the participation of the kids, the concept of the song is altered and diminished. The song and the lyrics are indeed amusing and the video doesn’t fail to play on that aspect. But there is something more to the thoughts expressed in the song that the video doesn’t capture that well. While the casual attitude was absolutely necessary, the details could have helped to a more accurate portrayal of the message, going a bit further with their significance.

Although this is not the usual Leessang song, it is admirable that they decided to experiment with new sounds and images. They did a great job for this song and the combination of meaningfulness and humor enhances the sense of coherency that the duo’s artwork possesses. It builds up to the anticipation for the album and pre-releasing the video was an intelligent move. It shows that Leessang is constantly evolving and it shapes the expectations of the audience.

To sum up, the video is entertaining, well put together and it matches the lyrics, having both qualities and flaws. My final rating of it is a 4.3/5. It will be interesting to see what direction will this album have, but so far, so good. What did you think of it? What is your rating for this video?