A Pink Tells You to "Hush" About Their Crush(es) 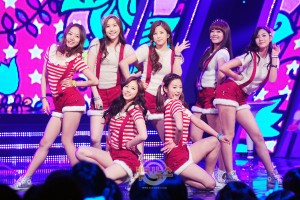 A Pink returned two weeks ago with their first full studio album, UNE ANNEE, which includes title track, “Hush.” The group hit the one-year mark last month, after a successful debut in 2011, two mini-albums, close to a clean sweep of all the 2011 rookie awards, and a M! Countdown win in January for “My My.” Their image up until now has been cute, innocent, almost otherworldly, similar to the fairies of earlier generations, such as S.E.S. or Fin.K.L, aside from that brief dance break in “My My.”

Although I prefer songs and groups that have stronger and more mature concepts, I still have to say that A Pink does cute and adorable the right way. Many girl groups end up seeming too childish or exaggerated when they attempt to act in a cute manner, but A Pink manages to instead be girlish, which is more realistic and less likely to incur negativity. With “Hush,” A Pink takes a step towards a more mature image with their clothing and sound, though the lyrics still remain that of a teenager gauging the right time to confess to her crush. If you haven’t already, take a look at the “Hush” MV below.

The first aspect that differed from previous A Pink title songs is that this MV doesn’t have a storyline acted out. “I Don’t Know” had the girls interacting with Beast‘s Kikwang, and “My My” presented member Na-eun‘s quest to confess and claim her boy. Here in “Hush,” there is no such storyline. It’s a run-of-the-mill dance MV with close-ups of the members.

There are three distinguishable sets and about four or five different outfits which serve to spice up the music video a bit. All three sets are outfitted with similar pink/gray themes, providing cohesiveness between switches of scenes. The pink clearly intends to relate the group name, but it also keeps a distinctly feminine vibe about the set, a characteristic that suits A Pink well. The darker gray is a change from their previous, lighter, and whiter music videos, also helping to indicate that step towards a more mature image. The music itself has harder beats and a lower tone suited for dance as opposed to the previous brighter and higher tones. The sets are also filled with smooth lines, giving a streamlined and elegant look to it while the seven disco balls add a youthful edge with lights that improve what could have been a boring set. Another of the sets, where many individual clips are taken, continues with the straight lines and sharp edges, but also finds a way to incorporate cubes, perhaps alluding to the entertainment company that A Pink is under: A Cube Entertainment. 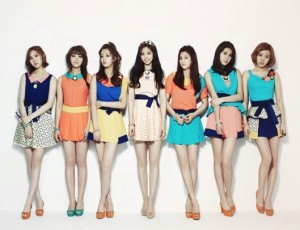 The clothing worn by the girls is more mature and fashion forward than what they’ve worn before. There’s the simple T-shirt and jeans look, outfits that utilize bright colors and match them together to be eye-catching, simple dresses, and then looks that would fit in at a party. The style choices speak well to the group’s youthful look, and they all look appealing without having to show a lot of skin or have a wardrobe only full of skintight outfits. Their makeup mostly sticks to creating a natural look with pink lips and some eyeliner here and there. This goes back to A Pink being good at pulling off girlish looks without having to overact to suit them.

As the styling varies multiple times, the camera does a good job of taking full-length (or just longer) shots that show off the whole figure rather than just having the focus being on the face each time individual clips came around. There is also a great flow to the editing of the video, fitting in especially well with the beats considering the multiple cuts. Overall, the cinematography is good, nothing especially spectacular, but still above average.

I’m a sucker for choreography that incorporates part of the song’s lyrics or theme, so I enjoyed the several moves involving covering their mouths or using the single index finger over pursed lips, a well-known gesture for telling other to be quiet. Most of the choreography is feminine, demonstrating a more restrained and matured dance style that doesn’t have the freedom of previous dances, and with good reason.

It was also interesting to see that the individual shots weren’t just of members making faces at the camera, but also of them doing the choreography, only to be put straight back into the group dance at the right moment to match the rest. It helped keep the fluidity through connection of that dance. However, the expressions of the girls didn’t quite fit with the words sung. The lyrics speak of a girl with a crush who wants to wait before telling said crush. So as a result, they’re saying “hush” to the listener, worried that the listener will somehow do something to alert the crush of the crush. A Pink’s expressions should be worried or concerned at least at some portions of the song if this is the case. But throughout, there is nothing but smiles and coy glances. While they look lovely doing that, it would be better to have a more accurate representation of the lyrics being sung, especially if this is essentially just a dance MV. 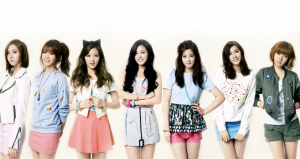 While I’m on the subject of the lyrics, the audience, whoever is the “you” referred to in the song, changes. Sometimes “you” is a friend, the one who might ruin A Pink’s plans. Other times, the “you” is the crush himself. This was a little confusing, and it happened also in the English lines. It was nebulous who the “you” in those lines was even referring to, or how that related to the rest of the lyrics. For international fans, especially English-speaking ones, hearing confusing English can be unappetizing, affecting their opinion of the song. As for the message of this song, it’s a typical one about feelings for a boy, which is understandable. It isn’t about anything particularly intellectually stimulating, though it is nice to see the girls take time to consider how they want to approach a potential relationship.

A Pink’s comeback moved forward in the styling and choreography departments. While the music video helps to establish their feminine appeal, its lack of storyline, confusing connections between lyrics and expression, and absence of anything eye-popping or spectacular make this music video just okay. But on the more positive side, I look forward to seeing A Pink continue to progress as they grow older and attempt different concepts.

Did A Pink successfully convince you to keep their secret? Leave a comment letting us know your opinion of the music video!