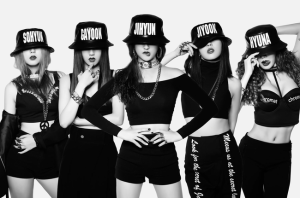 Yesterday and the day before, I told you the story of K-pop of years past. Looking back on the music and groups of 2005 and 1995 is always a fun exercise in nostalgia, and you can see how it established the foundation that our favorite idols now come from. K-pop in 2015 was so much more active and prolific than the old crowd could have ever imagined it would be. Rather than a handful of dance groups and soloists, there are now balladeers and idol groups, hip hoppers and R&B singers, bands of every flavor, from mature first gen artists to children masquerading as rookies. Especially in comparison to the horrendous troubles of 2014, this last year has truly been a wonderful time to be a K-pop fan.

Since there’s so much more to cover, let me dive right in. First, let’s take a look at what the old crowd is doing these days. It’s been 20 years, not long, yet some of the big names of the past have retired or lost popularity. Yet so many more of them are still there exercising their musical prowess and reputations either in front of the camera or behind the scenes.

The biggest news this last year was the comeback of Turbo, with the very retro sounding “Again”, for which they gathered all three prior members and created a new trio. Of course, mega-group g.o.d has also made a resurgence in the last few years. They came back in 2014 with “Saturday Night” and “Story of Our Lives,” and continued their success of bittersweet heartfelt ballads in 2015 with “A Funny But Sad Day.”

Shinhwa members have been going solo one by one over the years, but 2015 saw a number of their individual comebacks, as well as the group song “Sniper.” We saw “Du Du Du” and “I’m Fine” from Kim Dong-wan and “Wow Wow Wow” by Jun Jin ft. Eric. They even began teasing for a comeback of Shin Hye-sung at the very beginning of 2016. Andy Lee has even established his own company, TOP Media, following in the footsteps of Yang Hyun-suk and Park Jin-young before him. TOP Media manages groups Teen Top, 100%, and in 2015 debuted the new Up10tion.

SG Wannabe has also had a strong continuous career since the early 2000s. This year we saw from them two gorgeous songs, “Love You” and “Good Memory,” with equally gorgeously well-executed music videos. I highly recommend watching both of them.

The second generation idols are, for the most part, still going strong. Of course, some groups have disbanded, and TVXQ has split into two as of 2010, but those who are still performing have passed the 5-year curse and effectively solidified their place in the history books. Most surprising this year was the comeback of Stephanie, late of CSJH the Grace, with “Prisoner.”

Both sides of TVXQ showed their faces with the solos “Rise As One” by Max Changmin and “Champagne” by U-know Yunho, and JYJ continued their steady presence with their group release “Back Seat” and Jaejoong’s “But I” in 2014 and Xiah Junsu’s new “Yesterday” and “Flower” ft. Tablo. Big news for the group this year was the passing of the “JYJ Bill,” as it’s been nicknamed, which will hopefully allow for their popularity and presence in Korea to grow again from now on.

Super Junior also held onto their popularity this year with their fun promotions for “Devil” and “Magic.” Since their debut in 2005, different members have done many solo projects and they also continued in 2015, with Donghae and Eunhyuk’s “Growing Pains” and Kyuhyun’s newest album and singles “A Million Pieces” and “The Day We Felt the Distance.” And there is finally a Ryeowook solo debut coming in 2016, 10 years in the making.

Also going strong are the old crowd of hip hop. Since they’re outside the idol machine, they have the wonderful situation now where they’re able to directly mentor the up and coming artists, and they’ve been embracing the concept of the collaboration whole-heartedly this year. Dynamic Duo established their own company in 2006, Amoeba Culture, which is now also the home of new hip hop R&B powerhouse singer and producer Zion T. In 2015 they released, “Jam” by Dynamic Duo, “No Makeup” by Gaeko ft. Zion T and Ha:TFELT, Zion T’s “Eat,” “Zero Gravity,” “No Makeup,” and “Just” ft. Crush. Gaeko has also featured this year in Crush’s “Hug Me,” Hangzoo’s “Best Driver,” and Gary of Leessang’s “Lonely Night.”

Zion T also performed with Tablo for Yankie’s “Sold Out,” with Dok2 for “Still On My Way,” and with Zico for “Eureka.” And Gary has also done “JOA” featuring Jay Park, and “Get Some Air” ft. Mi-woo, the first rookie artist of the brand new Leessang Company. Mi-woo debuted this year with “Broken Doll” and also featured on Leessang’s most recent album track “Kaleidoscope.” Let’s just say it’s been a very busy year for the amazing hip hop family.

Another huge surprise of 2015 was the breakthrough of indie band Hyukoh, who signed on as the first group under Tablo’s music label HIGHGRND. Hyukoh (Oh Hyuk, Im Dong-gun, Lim Hyun-jae, and Lee In-woo) released hit after hit this year, including “Hooka,” “Comes and Goes” and “Wiing Wiing.”

I have a feeling we’re going to see even more resurgence of K-pop bands in the next few years. FT Island and CN Blue have been going strong since 2007 and 2009, respectively, (and there was the moderate success of TRAX between 2004-2011) but K-pop bands have always been outliers in the idol world. Yet, this year we saw, not only the fantastic rise of Hyukoh, but also the debuts of two new bands, Day6 under JYP Entertainment and N.Flying of FNC, also the home of FT Island and CN Blue. Day6 especially had a very popular debut with the catchy “Congratulations.”

Other debuts of 2015 that have staying power are that of SEVENTEEN, with “Adore U” and “Mansae,” the 13-member group under Pledis Entertainment who already write, compose, produce, and choreograph in addition to dancing and singing. Also notable are Oh My Girl, with “Closer,” and G.Soul, the R&B singer under JYP who has apparently been training for over 15 years, since before TVXQ debuted. He had two spectacular singles, “You” and “Crazy for You.” Of course we can’t forget Papa YG’s new favorite group iKon. While their debut singles weren’t received very well, the two released midyear slightly more popular, it’s the latest two,  “What’s Wrong” and “Dumb & Dumber,” released only a couple weeks ago that I think will really hit it off.

Then we have those groups who, in 2015, are at the top of their career, breaking through, or making history one way or the other. This year, BTS was the mainstream success story with all three of their releases, “Dope,” “I Need You,” and “Run,” being completely loved and played everywhere. B.A.P managed to resolve their almost year long dispute with their company, TS Entertainment, and came back with “Young, Wild, and Free” much to the relief of everyone who didn’t want to see another promising group disband under contract disputes.

The MVP of 2015, however, was most definitely Big Bang. No one else in K-pop has ever tried to release 7 music videos and 8 singles over the course of 4 months while conducting a worldwide tour. Six months later, we still don’t have the MADE album, but we’ll keep watching those music videos over and over until we finally get it.

“Loser,” “Bae Bae,” “Bang Bang Bang, “Sober,” “We Like to Party,” “Let’s Not Fall In Love,” “If You,” and “Zutter” may not all become K-pop classics, but one or two of them is guaranteed to be covered by the fresh-faced idols of 2025 just as that young G-Dragon and Taeyang performed DEUX and Daesung and TOP joined in for a Seo Taiji and the Boys cover in 2007. Here’s to hoping we are all still here and enjoying K-pop, and our favorite artists and idols are still performing when that time comes around.