Last January, 2016, I wrote on the beginning of K-pop, the history behind the genre we all now know and love. The years 1992-1995 provided a spectacular jumping off point for the new best-selling songs coming out of South Korea. While we still have many years to go before they reach the ears of countries across the ocean, in 1996 this flashy new sound was only gaining momentum.

Across the world this was the time of the pop idols – The Backstreet Boys, N’Sync, and the Spice Girls all hit it big with “We’ve Got It Goin’ On”, “Tearin’ Up My Heart”, and “Wannabe” in 1995, 1997, and 1996. South Korea was no exception. Not to be left in the dust, Yang Hyun-suk and Lee Soo-man were two of the men who took a look at the international music scene and, in 1996, began the process of creating Korea’s own idol groups.

Park Jin-young would found his own company in 1997 to complete the Big 3, and his transformation into JYP, but at this time was still performing his own hit music. His song of 1996, “She Was Pretty” was his 3rd chart topper and continues to make for highly entertaining cover performances, including this one by Wheein from Duet Song Festival last year.

Meanwhile, after Seo Taiji’s sudden disbandment of The Boys in January, 1996, member Yang Hyun-suk had plenty of success and time on his hands. He founded YG Entertainment in March and tried to recreate something similar to his group with Seo Taiji. The new hip hop trio was called Keep Six and debuted in September with the song “Forgive Me”.

However, another group debuted alongside Keep Six in September that won the popularity contest by miles. They came from the also newly founded SM Entertainment, brainchild of Lee Soo-man, who had a singing career of his own in the late 1970s. After developing an in-house training system, that had never before been heard of in South Korea, Lee Soo-man debuted his first group, High-five of Teenagers, or as they were more well known, H.O.T.

H.O.T, comprised of five members, Kangta, Moon Hee-jun, Jang Woo-hyuk, Tony Ahn, and Lee Jae-won, had two massive hits in 1996. The first was their debut single, “Warrior’s Descendant”. The song had a similar sound to Seo Taiji and the Boys and definitely helped draw in fans who were missing the older, ground-breaking group.

Of course, we can’t have a history of H.O.T that doesn’t reference their incredible influence on the future of K-pop. Beyond providing a basis for the continued success of idol groups, their often heavy-rock-influenced sound spawned a new generation of head-banging, rapping, K-pop stars. For those of you who might not have been familiar with H.O.T before, you can hear their influence in the intro to BTS’s debut song “No More Dream”, which clearly references “Warrior’s Descendant”. At this year’s KBS Song Festival, BTS also showed off a staggering cover of “Warrior’s Descendant’s” spiritual predecessor, Seo Taiji and the Boys’ “Class Idea”.

Other modern groups to cover H.O.T are B.A.P, in both 2012’s performance and the perfect H.O.T replica performed at the 2016 KBS Song Festival, and also the rookies Pentagon’s version. H.O.T’s second single, and arguably more popular song, the incredibly upbeat tooth-rottingly sweet ”Candy”, has been covered by everyone from EXO and Shinee to B.A.P and Big Bang, and most recently Up10tion’s adorable 2015 performance. And of course, you’ll hear the song in the popular drama Reply 1997.

Yet, the loud new idol groups weren’t the only ones making waves in 1996. While the biggest piece of news was the retirement of Seo Taiji, the group’s controversial music of the past few years brought about a big step toward decreasing music censorship in 1996. The fan backlash from the banning of their song, “Sidae Yugam (Shame of the Times)”, by the Public Performance Ethics Committee lead to the abolishment of the previously popular system of “pre-censorship”. The song’s lyrics criticised the Korean government and under the current system it was not allowed to even be published containing those lyrics. The group’s popularity destroyed the whole idea of “pre-censoring” songs and allowed future artists to be more free with their lyrics. (Though by no means does this mean the Ministry of Gender Equality and family has stopped banning songs at all.)

Turbo, “dance music’s scary kids”, continued their rise to fame of 1995, releasing their second album with “Love Is (3+3=0)” and “Twist King”. They fell into internal conflict mid-year with the departure of Kim Jong-kook’s partner, Kim Jung-nam. Kim Jong-kook reportedly went into hiding so effectively that the police had to be called in to discover his whereabouts, and yet despite their literal disappearance from the music scene, the group managed to win three Bonsangs at the 1996 end of year award ceremonies, and Kim Jong-kook came back with a new partner in October of 1997.

A somewhat surprising trend of 1996 to our modern idol-group mindset was the popularity of co-ed groups. KOLA with “Mosquito”, ZaZa with “On the Bus”, and Roo’Ra with “3! 4!”, were already popular co-ed groups of the time, and Lee Juno of Seo Taiji and the Boys founded the additional group, the Young Turks Club (YTC), with “Affection”, in the second half of ‘96. Of these songs, only ZaZa and Roo’Ra have really found cover-song immortality with the likes of BtoB and 4Minute’s Ji Yoon performing “On the Bus” in 2015, and “3! 4!” being covered by Ailee in 2012 and by Girls’ Generation featuring Roo’Ra themselves in 2009.

The R&B side of things was taken care of by the group Solid, a trio from Los Angeles who had been slowly building a fanbase since 1993. Their 1995 song “Holding on to the End of this Night” is a true classic of Korean music and has been covered by Fly to the Sky, Kang Min-kyung of Davichi, Miss A’s Min, 2AM, JYJ, Hwang Chi-yeol and leeSA, Zion.T, as well as being a staple on the audition and music performance shows. Solid came out with another best-seller in 1996 in the form of the rocking and haunting “Soul Mates” (also covered by B1A4 just this last year).

And the Top 40 of 1996 is rounded out by Clon, Cool, DJ Doc, Yangpa, and Uhm Jung-hwa. Clon, made up of Kang Won-rae and Koo Jun-yup (later known as DJ Koo) who had been on the scene since 1990 in the form of the group Hyun Jin-young and Wawa, debuted as a duo in 1996 and went straight to the top with the song “Nan” and its followup “Kung Ddari Shah Bah Rah”. DJ Koo now helps keep the legacy of these songs alive by collaborating with idols for special performances, such as this one with 4Minute’s Ji-yoon in 2011, and with BTS in 2014. Monsta X also performed a very fun medley of both songs in 2016.

Yangpa and Uhm Jung-hwa took the awards for ballads of the year. Yangpa had the debut hit of “Young Love”, while Uhm Jung-hwa created the best-sellers “A Love Only Heaven Can Permit” and “Sad Exception”. Both of these virtuostic women are still performing to this day, with Yangpa performing on music performance shows and Uhm Jung-hwa holding a decently long set during the end of year KBS Song Festival and still releasing new music.

Finally, the dance groups Cool and DJ Doc contributed the songs “Waiting”, and “Ok? Ok” and “Dance with Doc” respectively. “Waiting” was used in the 2015 OST for Persevere, Goo Hae Ra, sung by B1A4’s Jinyoung and U Sung-eun. And the singing-dancing-producing wonder-kids Seventeen performed the peppiest cover of 2016 during the summer SBS Dream Concert.

So, what’s your favorite song or cover version from 1996? 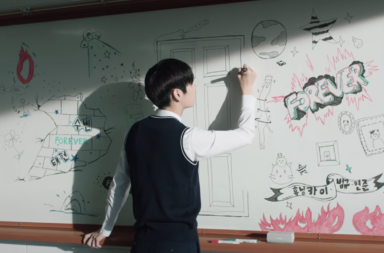