Kasper Falls Flat with “Lean On Me” MV

There was a period in my life when I diminished myself because I was infatuated with a boy. By this I mean modulated my screechy laugh, remembered to wear concealer, and carried conversation with compliant smiles rather than combative arguments in order to seem like a more appealing person. But the most agonizing part of this ruse was the time I wasted waiting for him – to text, to call, to appear drunk on my doorstep – and the shame that came with knowing how malleable I had become for someone I liked.

It’s a pliability many of us know all too well; a surface-level graciousness that women often reinforce in their relationships. “Baby, just lean on me and call me whenever,” Kasper begins in “Lean on Me,” joining the chorus of voices that have, at one point or another, chosen to live in accordance to the conveniences and whims of their beloved.

The debut single is a song of melancholy, channeling a woman who has become resigned to sacrificing herself for the one she cares about.

“Ever since you told me we’re through
It’s okay, it’s fine, I understand
But call me whenever
If guilt holds you back and messes with your mind…
Clean that, erase it, just erase it”

There’s a sense of stubbornness, as well as desperation; even if the other party is no longer interested, Kasper intends to do as much as she can for the ghost of her significant other. And so she waits, distracting herself with small chores, nursing a drink at a bar, ultimately anxious and alone by her phone.

“Ring ring ring, the telephone sings to me
I pick up, pick up the phone and try to
Convince you to spend the night with me
Your voice eventually gets weaker
When will I be able to get clean from you?”

In the last line hides the tension of one who spends their time giving – willing to sacrifice for the sake of the other, while feeling guilty for not being able to act for oneself. It’s a self-loathing on constant loop in my brain whenever I fall for a guy: why do you do this to yourself? Why are you slipping back into a position of subservience? You, an independent 21st century woman?

It’s a point of tension I wish Kasper could address with more skill in “Lean On Me.” The song maintains a constant lightness as Kasper sings the chorus, only accelerating pointedly into a rap as she enters the verses about how painful it can be to let someone lean on you. Structurally, the decision to move between singing and rapping fits the mood here – but is ruined by the fact that Kasper still has not learned how to rap well. 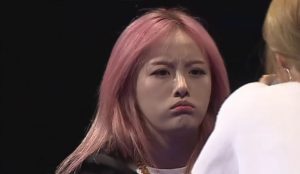 Before signing with DSP Media, she was better known for being a contestant on Unpretty Rapstar 2, a former member of hip hop group Play the Siren, as well as being a YouTube figure who posted haul videos and mixtapes. Her recent performances on Unpretty Rapstar 2 were mediocre at best, where she most often came across as an awkward contestant who made great faces when insulted. She was finally eliminated in episode six, after being unable to summon adequate stage presence or anger when it came to the diss battles, and demonstrating rap that came across as hollow, without emotion.

Perhaps because of this, DSP made the executive decision to highlight her singing abilities instead, and push her towards a slower, more lyrical rap. But it seems she still possesses the same problems as an artist. This is made especially clear in the MV for “Lean On Me,” where her face remains consistently passive, as though she is simply reciting the words to her song.

Her flatness is unfortunately only emphasized by the cheapness of the MV, which cuts between stationary scenes of her standing against neon signs, and her sitting in a diner booth. Such a basic concept relies entirely on the charisma of the performer, which Kasper has yet to develop as a young artist. It’s a problem reminiscent of Lee Hi’s struggle to emote facially – something YG Entertainment solved in her later MVs by distracting the audience with soaring views, rich colors, and novelty formats.

The question is whether DSP Media will be willing to devote the time and resources to develop the artist they have in their hands. If anything, Kasper’s varied activities thus far demonstrate the devotion towards becoming a public figure, and the discipline to work towards her goals. With luck, her future releases will show an improvement in skill, as well as a deeper investment on the part of her company.