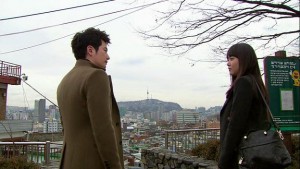 The last week in K-pop brought new songs from MFBTY and LeeSsang among others and BoA created a “Disturbance” with her new MV starring SHINee’s Taemin and featuring an option to choose one of two endings.   It also was the ending of the K-drama Cheongdamdong Alice. It was a good drama and I loved how Moon Geun-young‘s character was smart enough not to just settle for the things dealt her, but there was something lacking in the drama–that infamous 2% short.

The following are the 5 Things that I loved in K-pop last week.  If you’re not up-to-date on your K-pop and don’t like being spoiled… turn back now.

Couldn’t pick one over the other so here’s a tie for the #5 spot of this week’s 5 Things.  First up the boys of Boyfriend at the amusement park on an episode of Hello Baby season 7.  Donghyun, Youngmin, and Minwoo lost their mission so as a punishment had to put on lipstick while riding the Let’s Spin It ride.  Donghyun and Minwoo were terrible at the task, but Youngmin was surprisingly proficient at applying lipstick…

It was rookie boy band week at Let’s Go Dream Team 2 with the likes of VIXX, MyName, and A-Prince competing. They played a version of jousting as one of the games and the results were at times brutal–don’t they know not to hit an idol in the moneymaker?

Kwanghee and Sunhwa in the kitchen on the latest episode of We Got Married and Kwanghee gets tasked with cleaning the fish. I’m not going to be hypocritical and say I wouldn’t freak out having to clean a fish either, but I think I could probably have done a better job of keeping the fish in one piece.

3. Akdong Musician is One of a Kind

The popular duo on K-pop Star2, they’ve already done a CF for Olleh, did a remake of G-Dragon‘s “One of a Kind” in the latest episode in which the top 10 will be picked.  Although I thought they did a good job, their performance wasn’t enough to warrant them an automatic spot in the top 10–they do however still have a chance as they placed #2 for their round.

A pianist and violinist appeared on Star King and showed off some of their smooth moves while plating their instruments with some of the SNSD members.  Looks like the girls can still get flustered even though they’re huge international stars.  What is it about boys that can play an instrument?

LeeSsang released the MV for their song “Tears” featuring the vocals of The SeeYa‘s Eugene and starring NS Yoon and Daniel from DMTN (formerly known as Dalmatian). Loved the song and the beautifully shot MV.