Ah, merry-go-rounds — the picture-perfect image of magic and innocence, and also the title of Sokodomo‘s track for his battle stage in Show Me the Money 10, featuring Zion.T and Wonstein and produced by Slom. The track achieved an “all-kill” across the charts after it was aired recently on the program. Yet this motif is not new to Korean songs and carries different meanings across songs.

As a song about first love, the carousel is painted in an innocent and joyful light. Its spinning movement is also used to visualise the speaker’s heart, while its fixed pivot visualises the speaker’s promise of never leaving the beloved’s side. Similarly, IZ*ONE‘s “Merry-Go-Round” is bathed in a dreamy innocence. It describes a dreamscape of timelessness, only privy to the speaker and her beloved.

Similar to Astro’s song, the spinning motion of the carousel is likened to the speaker’s spinning heart (“Like a carousel
With my heart round, round, around I’ll keep spinning with you”). At the same time, there is an element of secrecy in this wonderland, as the merry-go-round is painted as a fantastical place that makes their secret romance possible.

Continuing on with the theme of romance but departing from the cotton-candy type of love, Momoland and SNSD‘s carousels are tinged with a bittersweet pining. In Momoland’s “Merry Go Round” the stationary axis of the carousel conveys the speaker’s inability to move on from her lover (“Going round and round and round … Back to the past, rewind, rewind”). In spite of its movement, the carousel remains at the same spot. It represents the beautiful memories of her lover being happy (“You smiled wide like before”), but is also tinged with sadness as the speaker is still stuck in the past (“Even as time passes, I’m here to stay”).

SNSD’s carousel in “Merry-Go-Round” is more literal — it is the “place we went together”, which holds blissful memories of the speaker and the lover on a late night date. The lyrics tell of a sad love story of the speaker failing to hold on to her lover in order to pursue her dream:

Similar to the songs above, the carousel connotes timelessness (“My memory is still fresh”, “With this appearance, always be next to me”) and is ultimately used to describe the lover (“He’s like merry-go-round”), possibly meaning that the lover embodies all these happy memories that the speaker has of them. While Astro and IZ*ONE’s carousels celebrate a child-like innocent puppy love in the present, Momoland and SNSD’s carousels are images of the past and convey a deep sense of nostalgia.

Finally, we pivot back to where we started, with Sokodomo’s “Merry-Go-Round”. Instead of romance, the carousel is used as a metaphor for life, and pictured like a gaudy rat wheel — “Life is a merry-go-round, we always run. When will it end? I have no idea.” The carousel’s stasis that was used in Astro’s song to represent a lover’s unwielding faithfulness, and used in Momoland’s song to represent being unable to move on, is here used to express the desire of not growing up.

The song talks about how Sokodmo idealizes his childhood, by setting out on the road to adulthood “to find the thing that doesn’t change like that in the childhood”. This could perhaps be a nod to his unique branding, where he often refers to himself as an alien. The past also symbolizes a time of happiness, as it was “Just the moment when Seung-ho was happy”. At the same time, he holds the past with a lot of regret, as he questions, “If I had a chance to change that moment, would I become the better ‘myself’, now?” Hence similar to the songs above, the carousel is a picture of blissful innocence frozen in time.

What is new in Sokodomo’s song is that the carousel is used to portray life’s cyclical nature. While running on the same spot, time repeats itself again, such that “while I was watching the clock [ticked] back to yesterday”. As events repeat themselves in life, time continues to flow — “Just like our time, which has come to us after going round and round”. The carousel continues spinning “As if it lasts forever”, just like how we continue living disregarding death.

In all these songs, the carousel is always pictured as something bright and colourful in performances, but the lyrics might tell a different story. Typically, it is used to convey innocence, as in the case of puppy love, like with Astro and IZ*ONE. At times its stasis is used to symbolize a lover’s unyielding love, or as with Momoland, a more melancholic inability to move on. In the case of Sokodomo, the carousel is used to represent life’s cyclical nature, of constant movement that leads to the same point repeatedly. And just like the carousel itself, perhaps Korean music would return to these motifs of nostalgia, innocence and stasis again in the future.

(Images via Mnet, The K-pop. Lyrics via Lyricstranslate, Genius [1], [2], Engtranslations) 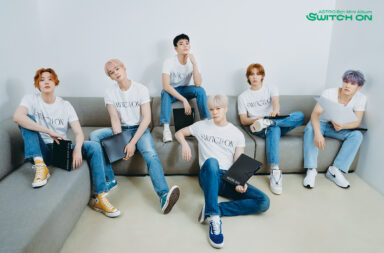 Astro Proves Their Versatility in Summery “Switch On”