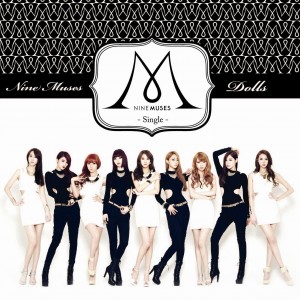 Nine Muses is back with a subunit concept for their new song “Dolls”. Since they debuted in 2010, Nine Muses has been one of those groups that isn’t obscure enough to fail completely, but isn’t popular enough to make it big time, either. Although they debuted as a nine member group, they soon lost one member after another, making it one of those groups where it is hard to choose a bias because the lineup is always changing. With the addition of their newest member, Sungah, this is the first time the group has actually had nine members since 2011, despite their name.

The idea behind their subunits is black and white, or sexy and sweet, and unlike some groups have done in the past (such as After School with their red and blue subunits), the sub-units in Nine Muses simply make up different parts of the same MV as opposed to having their own songs, dance moves, etc. The black, or sexy, subunit is made up of members Kyungri, Eunji, Hyuna, and Sungah, and the white, or sweet, sub-unit is made up of Leesem, Sera, Euaerin, Hyemi, and Minha.

The main difference between the units is that they get different outfits and a different set for their dance scenes. The choreography is the same, the song is the same, and even though the sets are different they have the same insane bright pink deer heads on the background wall. This raises the question: why are there subunits at all? It makes the visuals of the MV a little more interesting because there are more outfits to look at, and this helps with the dance scenes with all the members because the difference in outfits breaks up what could otherwise be one big blob of girls with no distinction. Other than that, well, hopefully the subunits are used more in the album or their lives, because otherwise that was a lot of hype for very little substance.

The outfits for the black/sexy subunit are reminiscent of the US in the late 80s and early 90s, with the fedora and tie being used in a sexy androgynous way as opposed to a straight-up masculine way. It is reminiscent of fashions used by Madonna, Michael Jackson, and even Britney Spears in her later career, but despite that, the styling on Nine Muses wasn’t thrilling. The outfits also played off jazz fashion, which makes sense for a song with a jazzy feel to the music, but something was off, maybe it as the awkwardly fitted pleather shorts? Some of the accessories were also overwhelming and clunky looking, the big, gold wrist cuffs, for example and the black gloves on only one member. Regardless, the outfits didn’t quite make it to “sexy” for me. 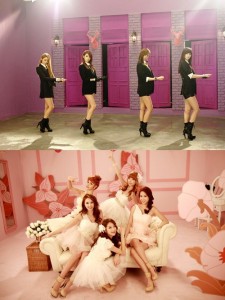 The white/sweet subunit went the opposite direction for their outfits with pristine, snow-white, ruffled short-cut dressed that were pure femininity. The hair accessories and jewelry were subtle and matched the dresses and the theme of the subunit well. Overall, these outfits felt more fitting on the members and in the MV then the androgynous ones. The only issue was that the subunit’s cute outfits looked awkward when doing the sexy-butt dance move with the fluffy dresses on.

In that one case, the leather shorts were much preferable, because the fluffy dresses not only hid the intricacy of the hip roll itself, it also made the members look like girly girls trying to be sexy when they don’t have any experience . This is one of the issues with the subunits idea, having different outfits and different concepts makes having the exact some dance moves somewhat problematic because when the sexy girls are doing a cute dance move and the cute girls are doing a sexy dance move it looks out-of-place.

The meshing of outfits and dance moves was better in the scenes with all nine members. Although they still styled them differently, the subunits each had their own outfits that stuck with their themes of sexy or sweet, they made the styling cohesive by making the outfits all black or all white in the particular scene. The black/sexy subunit continued to wear pants-suite type outfits for the entire MV, and the white/sweet subunit wore short dresses, but in the scenes with all members the dresses were slightly more form fitting and not so fluffy, making the dancing look a lot better.

Outside of the outfits, there isn’t much to mention about the subunits in the MV. Both subunits’ members got solo shots, either close-ups of them singing, or in the exciting mirror room, and honestly, that mirror room was like a bad fun house display. The way the camera was being shot from above it seemed like the members were trapped in a box of mirrors and instead of trying to escape they were posing and touching themselves in a sexy way.

For the majority of the MV we are going off this subunit idea, then out of nowhere, sleepover party! Nine Muses isn’t the first group to do this sort of “look how cute we are” scene in an otherwise unrelated MV, but it doesn’t match the subunit concept and it doesn’t match the MV to the point that it completely messed up the sexy/sweet theme entirely. Suddenly there wasn’t a division between the subunits; everyone was just in pajamas rolling around on the floor, which once again brings up the question as to why there are subunits at all. Aegyo and bright colors have their place, they are an essential part of K-pop culture, but they should be kept separate from an MV that is otherwise monochromatic and jazzy. 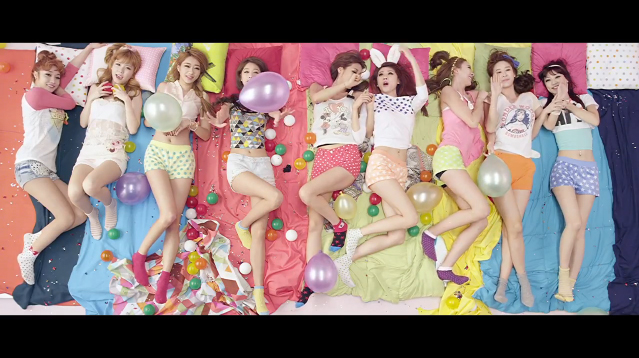 The rest of the sets in the MV were boring to say the least. They were obviously going for a minimalistic theme for the large group dance scenes, and although the sets were more complex for the subunit scenes they were still fairly simple. The most interesting objects were the random, pink deer heads mounted on the wall, which seem strangely out-of-place in an MV otherwise lacking in eccentric decor (unless you count purple doors and giant, wooden cut-out flowers as eccentric). Basically, there wasn’t a lot to look at in the MV other than the members and the overly bright lights shining behind them in the solo singing shots. Speaking of solo shots, the camera work for the rap section was incredibly unflattering and made both rappers features get blown out of proportion. Whatever lens the camera person was using to get that angle, they should never do it again.

Luckily for Nine Muses, this song is already climbing the real-time charts in Korea, so no matter how mediocre the MV may be, the song itself is catching the public’s attention. They tried to do something interesting with the subunit idea, but sadly it fell short, and the MV ended up with nothing more than two different outfit sets.