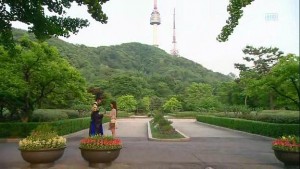 In the US, it was the Memorial Day weekend– a time where we remember those that paid the ultimate price in protecting the freedoms that we sometimes take for granted, but hopefully will never forget and the cost that those freedoms came by.  A special thanks to all service members for their sacrifice and duty. So now, I will use my liberty to speak of my overdose of everything K-pop related (and if you don’t already know–spoilers ahead!): LeeSsang released their new album and its title track “Someday“–so much goodness coming out for fans as they celebrate their 10th anniversary, B1A4 says “Baby Good Night,” Jaejoong is “Living Like a Dream” in Dr. Jin, IU channels “Rainism,” T-ara‘s going “Round and Round,” G.Na is “2Hot,” BTOB loves “Irresistible Lips,” No Brain gave an awesome performance on Immortal Song 2, Vixx wanna be a “Super Hero,” 2PM released the PV for “Beautiful,” and Kim Tae-woo released “High High” for the OST of Jang Dong-gun‘s new K-drama Gentleman’s Dignity, the Rooftop Prince although flawed with some plot holes it was a good watch, and here’s a bonus thing of Juniel featuring Yong-hwa with “Fool” since it’s a holiday–nothing to do with biceps at all.

5. Go For Broke on Star King

There was a Military appreciation special on Star King where the whole audience were troops and some of the troops were also the guests showcasing their special talents.  Loved the soldier who was a pro at doing K-pop girl group dance covers and got to dance with SISTAR, but I loved this clip of a soldier who is a ballroom dancing pro and got to reunite with his partner.

Korean Soccer superstar Park Ji-sung was the guest star on Running Man and I can honestly say it was one of the funniest Running Man episodes I’ve seen. They say it’s the first time that Park Ji-sung was on a reality show and I don’t know why– he was freaking hilarious and so cute!  Of course they played some soccer and he was classic when choosing a teammate for a 2 vs 7 match.  Those odds seemed pretty even to me, but it seemed as though the PDs didn’t think that would be fair and gave everyone “special powers” which was too funny to believe and had me thinking “Shaolin Soccer?”  The whole episode is a must see and I look forward to next week’s episode when Ji-sung will be joined by a couple of friends.

Choosing a life together on Queen In-hyun’s Man? This kiss between Hee-jin and Boong-do, although not even their first, was so romantically sweet–and apparently solves the problem of having a tall boyfriend.  I’m sure that this will be added to the list of great K-drama kisses; not sure if has gotten a name yet, but I’m thinking the “Tippy-toe Kiss” would be appropriate.

The most memorable and touching scene from the ending of the K-drama The King 2 Hearts, was when Bong-gu taunts Lee Jae-ha that Eun Shi-kyung came over to his side because controlling someone with money and with your power as king is the same thing. Eun Shi-kyung goes into his speech where he acknowledges Jae-ha’s weaknesses as king, but his reason for being loyal to Jae-ha until the end wasn’t because he was king–it was the kind of king he was. Of course what happened next pissed me off to no end, but this scene where Jae-shin is given Shi-kyung‘s personal safe was what had me bawling.

No lie, I kept waiting for Shi-kyung to show up in the finale, because after that touching video there’s no way he was really dead, right?  It was a ruse?  The King 2 Heart had great writing and excellent acting and I’m glad it had a happy, yet realistic, ending.

1. The Pursuit of Happiness…

Celebrating their 10th anniversary, Gary and Gil, better known as the K-hip-hop duo LeeSsang, released their 8th album, Unplugged on May 25.  The next day, they released the MV for the song “The Pursuit of Happiness” featuring Urban Zakapa‘s Jo Hyuna which talks of the struggles faced while pursuing your dream and how the hardships that you go through to keep that dream alive is worth it.  It’s a beautifully somber song that makes one think “have I done all that I can to pursue happiness or have I let everyday life, fear and all the other small things stop me from achieving true happiness?”