It’s been a crazy couple of days for K-pop fans States-side, specifically for our West Coasters, who got a double dose last weekend with both the SM Town concert in Anaheim and the Google concert in San Francisco. First up was the SM Town concert — both Salima and I were first timers at the concert and it was definitely an interesting experience to say the least, but we’ll get to that later. 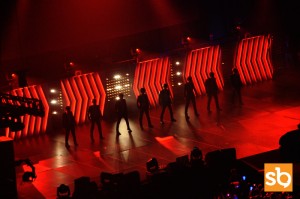 Salima: Just walking into the venue was an experience itself. I almost got lost in the sea of people wearing colorful T-shirts in support of their favorite groups: Shawol Sky Blues, SNSD Rose Pinks, and TVXQ Reds. It makes you feel really silly showing up in a simple pair of jeans and a jacket. But the rude awakening was seeing how young most of the fans were. 12 year-olds on down to 8 year-olds, all accompanied by their parents and guardians, all made me feel like maybe I was at the wrong Honda Center. It really put a face onto who K-pop fans are and makes you wonder if the younger demographic is a facet of K-pop in general, or SM Town. It was very family friendly, which is something I would have trouble imagining at maybe a YG concert or a Jungle Entertainment concert.

In any case, I was excited. And I may or may not have snuck in a camera.

A: Yeah, the age thing definitely struck me too. I think most of the K-pop concerts States-side have been predominantly family affairs, because despite how often it seems that K-pop acts are going overseas, they’re still pretty rare as a whole, so a lot of Korean families do make it a point to show up and have fun. And to be fair to SM Town fans, I think they’re just as old as fans of other companies and if YG Family had a concert here I’m sure it’d be filled with moms and dads too.

But getting back to the concert — were there one too many rock remixes of songs or what? I thought my skull was going to burst after SHINee‘s entire setlist and then Super Junior came out and did more rock versions of their songs. Aigoo.

S: You noticed that too? At one point SHINee came out to perform “Ring Ding Dong” and I couldn’t even recognize it! It was this hardcore, heavy metal version of the song and I just couldn’t take it seriously. “Fantastic, elastic” is ridiculous on its own, but to make a group of pretty boys scream the phrase and whip their hair around like banshees was beyond my comprehension. Why do dub-steppy, rock mixes when they only make your songs sound terrible? It looked like both Suju and SHINee didn’t exactly know how to maneuver the rock thing, but they tried their best. My favorite part: the performers scaring the audience with all the intense, pulsing screamo and then transitioning into tender video spots about the wholesomeness of SM Entertainment. 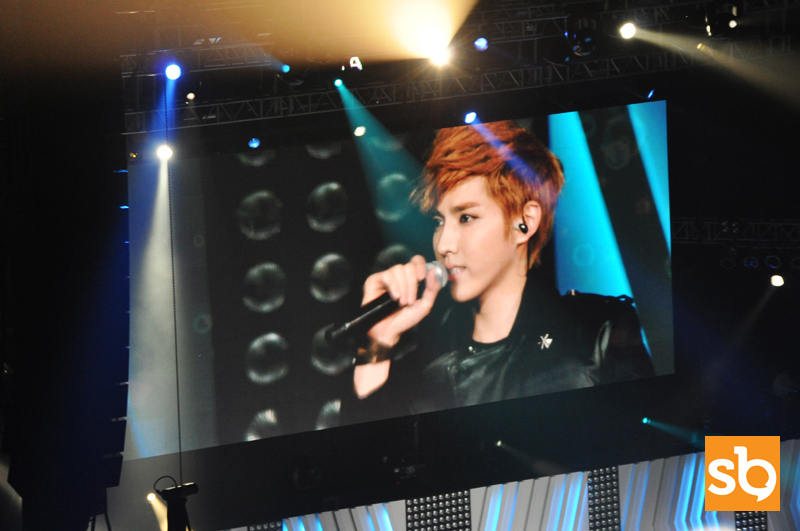 A: I know that most of the remixes for SHINee were actually from their own concerts, which I had seen footage of, so it made the setlist at SM Town all the more redundant. I really wasn’t a fan of the remixes to begin with but to see all that head whipping in person was a little too comical. I think this is where being experimental kind of fails a lot of these artists, because you can see that they’re trying to project a new dimension to their music that they don’t really understand, and it definitely felt out of place (and not to mention poser-ish).

I get the sentiment behind those slightly eery videos, but they were definitely not executed in the best way. All the graphics of trees and blue skies and the white tee shirts were just too much.

What were some of your favorite performances though? I personally really enjoyed basically all the stages of songs I haven’t seen before, like BoA‘s “One Dream” performance with Kris and Key, Changmin and Kyuhyun‘s ridiculously magnificent cover of Bruno Mars‘ “Just the Way You Are,” and of course the cracktastic performance of “Like a G6” with Amber, Kris, and Key.

S: Despite how I’ve made it sound like I didn’t enjoy the concert, I had a blast! I agree that Amber, Kris, and Key’s version of “Like a G6” was so much fun! In fact, I’ve developed a huge girl crush on Amber. I know we’ve sworn off the word “swaggie,” Amy, but that’s the only way I can describe her performance. Kris, on the other hand, looked like he would have been anywhere else but the stage performing that song.

I also enjoyed Jessica and Krystal‘s cover of “California Girls” by Katy Perry. It was so adorable, what with the whole them being from California thing. The f(x) and Super Junior collaboration of “Oops” was also really fun. I love how they saluted to Heechul when his image showed up on screen to sing his part. Also, can we just spare a moment to reiterate how amazing Luna is live? She gained a new fan that night.

The performance that took the cake for me was SHINee’s “Sherlock.” You thought that performance was enhanced by television tricks? No siree. Live, it’s even more magical. “Sherlock” was amazing live.

Then again, I haven’t seen many of SM artists’ stages on television like you have. Maybe that’s why I didn’t feel the redundancy. 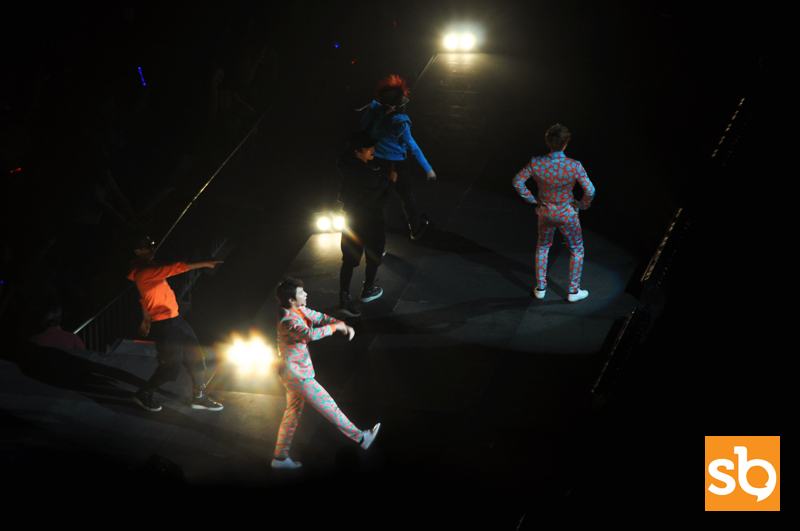 A: I’m a fairly big (woohoo, understatement of the year) SM Town fan, so I’ve pretty much seen all the performances they put on that night, ad nauseum for years now. I know that family concerts are usually the same performances with a special stage sprinkled here and there, but I think actually having to sit through a 3-4 hour concert full of performances I already know well made the entire concert a wee bit stale.

I was also SO excited about the prospect of having a stage solely for the dancers in the fam, but we … didn’t get one. I was totally sad-faced about this just because that stage is almost always my favorite stage at SM Town every year.

S: I thought the same about the potential for a dance stage. I was imagining this huge dance battle between the ladies of SM (Victoria, Hyoyeon, and BoA) and the guys (Taemin, Yunho, Eunhyuk). So much anticipation wasted.

Aside from the lack of dancing stages, the only thing I would have liked to see more of was Exo. Not because I am an Exo fan, but because they only performed two songs, “History” and “MAMA.” I wanted to make a decision on how I felt about them but I just couldn’t because they weren’t on stage for that long. I was disappointed about that.

A: Yeah, not going to lie, the severe lack of Exo made me weep a little. I think they have set a record in terms of how long they’ve debuted and already having participated in an SM Town, and that’s why they get for being such new fish out of the water, but still! It was also sort of an injustice for Kris to get that many special stages when his bandmates got none, and we can all agree that Kris was super low energy on both stages.

But aside from that, I think this concert was an eye-opening experience for a fan and first timer. I haven’t seen a good majority of these artists live, and it did confirm some things about what I previously thought, though not all because they were lipsynching most of the concert.

I know you’re not a huge SM Town fan, but did you end up liking the artists more after? Less? 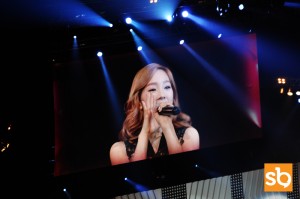 S: I’ve been exposed! I was hoping not to admit how much I’m not a huge fan of SM Town but it had to come up. But I must give credit where credit is due. For someone who’s never been to an SM event, they put on a really good show.

I was extremely surprised at how much I enjoyed SNSD, especially since I’ve never cared for them as a group. In my opinion, they were the best vocal performance of the night (after TVXQ’s Changmin, of course). And it’s because a lot of their songs they actually sang live. I was impressed by Taeyeon‘s vocal range and the members’ steady consistency. I won’t be wearing SNSD socks and t-shirts anytime soon like Dana, but I can admit they were sort of the bomb. So I’ll say I gained more respect for them as performers.

As a non-fan, I can’t say that I didn’t enjoy the concert. In fact, when they come to the States again, I might drop another $200 for an SM ticket, if only for the sake of K-pop. You planning on going again?

A: Oh I’m definitely going to go again. The setlist was mostly redundant and I’ll call a spade a spade, but this was definitely one of the most high-energy concerts I’ve been to, mostly because all the artists knew how to work well with each other, and knew each other, period, which made for funner times when I saw them all together.

For more photos from the event check out our Facebook album.

Now we open it up to you guys. Who went? How was your experience?