G.NA Takes Some Heat in “2HOT”

While there is a part of me that likes G.NA for being possibly the nearest ideal to any fanboy’s desires (the looks! the body! her slightly floozy mannerisms!), there is also a side that believes that G. NA’s real talents are criminally overlooked.

As her appearance on Yoo Heeyeol’s Sketchbook showed, not only was she someone who could hold a note, she also came across as someone who deeply loved performing and music with her pre-debut stories and inspirations in life. Certainly not the usual stuff idols tend to talk about on the show, about ideal types and fans.

So it was quite a disappointment to hear how Cube Entertainment had chosen to dumb her down for “Top Girl”, and go for the ideal-pretty-hot body-girly image. So with “2HOT”, does Cube continue along the same path, or is there evidence of a different G. NA?

The song does make for a reasonable listen, with a fair amount of dynamics, being reasonably catchy, and far easier to sing along than “Top Girl”. Vocally though, the song is no great shakes. While G.NA copes with the song adequately, and shows some vocal range during the chorus and near the ending, the feeling is always of the song not doing her voice justice, compared with songs off her first album.

When it first started, the video did give hints of being set in a musical, given the back up dancers and the obviousness of the sets. However, as soon as the “story” progressed it became very obvious the music video was exactly the same thematically as that of “Top Girl”: a really hot woman who can attract other men/suitors, and who can reject them at will.

It was no doubt a fun idea in the past, and could make for good self-parody (see the Wonder Girls’ “So Hot“). But now, the whole thing is starting to look slightly clichéd and there was very little of the music video that seemed to make fun of itself.

So to sum up the story line: G.NA prepares for a night out as she gets alerted to a suitor peeping outside a window. After changing, she heads out and rejects most of the guys waiting outside.

The same scene repeats outside a club, and she continues with her dance routines, which are literally so “hot” they set the club on

fire (the only thing funny about the video and nicely literal). From then on, the plot descends into the comical. Some incredibly buff firemen carry her out in style, and the dance moves continue, moving into the uncomfortably raunchy zone.

The dance breaks were probably where the video got very painful to watch. Granted, it may have been the back-up dancers doing more of the pelvic thrusts or butt wobbles, but it all seems to smack of trying too hard to look sexy. It probably is acceptable (if still tasteless) for rookie groups or singers, if only due to inexperience or trying to catch attention. But really, G.NA (or to be more precise Cube Entertainment), should really start thinking if such antics really help them image wise in the long run.

At times, sexiness is what is hinted at or just radiated through charisma, not by executing “raunchy” dance moves. Cube Entertainment strangely seems to confuse these two concepts, leading to many unfortunate accusations of their female artistes appearing “cheap” and coming very close to bans or needing changes to the choreography.

And while we’re at it, the blatant butt and chest shots, especially nearing the end of the video, do really push the video rather high on the Ministry of Gender Equality and Family (Korea) (MOGEF) radar, for the wrong reasons.

Another scene that I found rather uncomfortable to watch was one where the camera focuses on the females lower bodies, and then a few men, who are watching the dance, gesticulate their figures out. 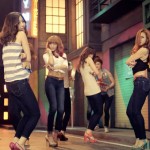 It was a real shame that all this cheapness took away from the more positive aspects of the music video, 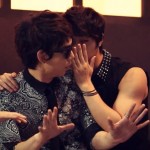 like the bright colour palettes, which made the Music Video stimulating visually, as well as the fashion which was inoffensively nice.

To sum up, unsophisticated choreography and camera shots, paired with a reasonable song, result in a final rating of 2.8 out of 5. Cube really should go back to the drawing board and remind us again where G.NA stands in music. Not so much as a stylised, sexy hot chick, but more of as a singer with a down to earth attitude.