Hyuna Ups the Ante and Further Polarizes in "How's This?"

Hyuna has always been a controversial figure. People seem to either love her or hate her. There’s rarely an in-between. To prove my point, I’m going to embed a poll right here so our readers may quantify their feelings towards her before continuing with the review.

For those who selected Love Her, I’m completely with you. Whether it be love for her unadulterated concepts, for the way she works a stage like no other, for her unapologetic sexy swag, for how she’s not afraid to push the envelope, or for all of the above, there’s really nothing that anchors one’s love for her more so than the mountains of hate which must be tolerated from her haters. In essence, love for Hyuna stems from a place of hate. And there is a lot of hate to go around.

For those of you who selected Hate Her, I don’t blame you. Cube Entertainment put her on a pedestal unlike any idol we’ve seen before. With the suddenly unexpected and unceremonious disbandment of 4Minute, it’s become crystal clear that the other members were never held in the same regard as Hyuna. They were just there to lift her up and to compensate for her shortcomings. And there are a lot of shortcomings.

Just to get the obvious ones out of the way: her musical talents are, for lack of a better word, lacking. Cube isn’t sure whether to make her a singer or a rapper because both vessels seem to create a certain type of discomfort. The reason for such isn’t that, as many people may think, Hyuna lacks the vocal or rapping abilities of other idols; it’s simply because her voice does not conform with that of a typical idol. She doesn’t have the powerful husky R&B vocals which allow her to be considered a good singer, nor does her nasally monotonous delivery qualify her for any rap accolades. In effect, these shortcomings force her promotions to center largely around her strengths: her ability to move and dazzle the stage.

The other big complaint about Hyuna is the lack of diversity in her concepts. Since her solo debut, her concepts have gone from sexy to more sexy to even more sexy. There’s also been an anti-feminist critique — which I have been guilty of endorsing — in her concepts and visuals which at times cater specifically to the male gaze. Not that she’s alone in committing such unspeakable crimes, but she’s definitely been singled out as the poster child for her willingness to continuously challenge the boundaries of what’s acceptable.

This certainly rings true in her newest release, “How’s This?” In fact, all the tropes mentioned, both negative and positive, are certainly on display in this song and MV, some of which have been amplified for mass effect. “How’s This?” is an extension of Hyuna’s last promotion, “Roll Deep.” More specifically, it’s an extension of the mind-blowing trailer to her fourth mini-album which showcased her as a luxurious mild-mannered heiress-type by day and as a heavy drinking, drug-using, orgy-indulging partier by night. In other words, she’s your typical American college girl archetype, as imagined by Koreans, best exemplified by this SNL Korea satire of Tiffany.

“How’s This?” focuses specifically on the partygoing vixen-by-night character, expanding upon the universe created in the fourth mini-album trailer by showing us what Hyuna’s night out at the club looks like. Typical club shenanigans ensue, not the least of which include: pulling up in an embarrassingly nice ride, making it rain, pouring expensive alcohol into the open mouths of willing clubgoers, picking up guys and grinding on them, lining up at the bathroom for some potential non-medical drug use; and of course, having some guy pull you by the wrist, pin you against the wall, and gaze into your eyes for a longing second before making out. All in a night’s work!

The song is what we’ve come to expect. For better or for worse, it’s been a foray into heavy electronic music ever since “Red,” and this is no different. Whatever vocals or rapping that is required is clearly overshadowed by the volume and production of the music. The song is clearly crafted to be performed and from what glimpses we have of the choreography, we can be sure that the live performance will contain all the trademarks we’ve come to associate with Hyuna: equal parts powerful, distinct, provocative, and difficult. 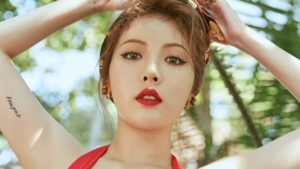 The song and MV is clearly meant to up the ante and further increase the divide between Hyuna’s supporters and her naysayers. It pushes the boundaries of what we’ve come to expect from a K-pop MV and gives us many things that we don’t get elsewhere. This makes Hyuna a polarizing figure because she challenges what it means to be an idol. Are idols not supposed to drink and use recreational drugs? Are they not supposed to dance seductively and give in to their inner desires when approached by a guy at a party? In other words, is it OK to give idols the agency to act upon their impulses?

If it were any other idol, the answer would be clearly a negative. However, Hyuna is the exception. For a female idol to be given the right to act upon her own sexual desires is clearly groundbreaking and possibly the most feminist thing you’ll get out of K-pop this year.

Whether you love her or hate her, we can all agree that Hyuna is vastly different from everyone out there and that’s exactly what makes her interesting. Her image is so vastly divergent from all other idols that it puts into question how we define an idol. I don’t think anyone will be changing their opinion of Hyuna after watching “How’s This?” but I hope that this review has allowed you to appreciate Hyuna for what she is.

Readers, do you love her or hate her? Let us know in the comments!