Hyuna Rules in "Red," But I'm Not Ululating

The colour red has often been considered as a chromatic symbol of strength, boldness and sexuality. Given these connotations, it’s no surprise that Cube Entertainment would think it the perfect colour for Hyuna‘s latest comeback. “Red” seeks to consolidate Hyuna’s brand, using the hue as shorthand for the qualities she embodies… And does a pretty good job of it. But does Cube keep up with her?

This MV is a true showcase for Hyuna: her earlier efforts show her off well enough, but she was often almost swallowed by the concepts in which she was placed. This could have happened here, too; but our K-pop starlet makes it work for her incredibly well. The reason for this is likely partly due to the nature of the concept, partly due to Hyuna’s increased confidence, and partly due to these two things feeding off each other. The product is an idol who can really sell the song and concept. Even in live performances, where it is clear that Hyuna can’t quite keep up, she still manages to engage the audience with her confident demeanour and apparent joy at being on stage.

It’s lucky that the MV exists, then, as it allows us to experience Hyuna’s charm without putting strain on her stamina. Naturally, the colour red features extensively in the video: it’s the lipstick at the start of the MV, marking Hyuna’s transformation into personifying the red brand; it’s Hyuna’s underwear, marking the seat of her power (excuse the pun); and, towards the end of the MV, it’s everywhere. Every dancer is wearing red from head to toe, but Hyuna stands out with her black hair. It’s a telling moment: as though the MV is telling us that, we can “be” as “red” as we want, but we will never be “red” like Hyuna. Even if she is fulfilling the vulnerability quota by singing about being “so lonely right now,” there is still an impression that Hyuna is one of a kind, and no amount of aping her is going to get us even close. 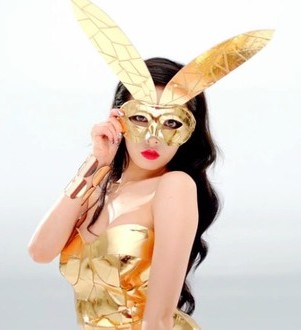 Speaking of aping, primates abound in this MV: we have a giant gorilla plushie swinging on a disco ball, many more plush dolls of monkeys and a real live gibbon held by Hyuna herself. We also see Hyuna at one point in a golden metallic bunny suit, surrounded by dancers wearing heads of different animals. She is presented as being a step above the masses, who are like wild animals driven crazy by Hyuna. Brands can be relate-able, but ultimately make their success in being aspirational; and that is exactly what we are seeing being illustrated here.

There is another reason for the monkey references, and that has to do with the lyrics. The chorus for “Red” starts with:

A monkey’s butt is red, what
Red is Hyuna, Hyuna is yeah

Which are lines from a children’s nursery rhyme in South Korea (the word “apple” is replaced with “Hyuna” in “Red”):

The sing-song quality of the chorus is inspired by the nursery rhyme, which explains why it tends to stick in your head. There have been complaints, naturally, about the suitability of having children’s lyrics in a song as provocative as this; but, honestly, considering past Hyuna lyrics, like “Ice Cream”‘s:

The words in “Red” are like a breath of fresh air — though, it says a lot that kids’ rhymes about word association sound more thoughtful than what songwriter  are churning out.

Another notable element in the song is Hyuna’s deeper voice, which is very much welcome. She may not be the best rapper, but her tone is much more tolerable when not made to sound like a chipmunk. And there are elements in the instrumental for the song that are awesome to hear, like the West Asian-inspired instrumental breakdown and ululating. The latter, in particular, is a welcome sound in K-pop. A sound of celebration, the English word is onomatopoeic, describing the sound women make with the rapid movement of their tongues and uvulas. Men may also be capable of ululating, but it has traditionally been the domain of women the vast number of cultures of which it’s a part, from Africa, to the Middle East, to South Asia, to various Indigenous cultures.

But the ululation by Native Americans has been twisted to demean them. Part of the stereotyping of Native Americans includes a very poor imitation of ululating by beating a palm against the mouth. A hand is often cupped around the mouth to help direct the sound, but it does not play a role in ululating itself. And while the “Red” MV does not show it, this stereotypical, and just plain wrong, move is part of the song’s actual choreography (at 0:47).

And this revelation acted as a springboard for me into seeing more instances of racial bias in this MV: using the sole black dancer to lead Hyuna’s royal procession in the breakdown, which is also reminiscent of Ancient Egypt; Any of the male dancers could have done that, but that the black dancer is used instead sets an uncomfortable precedent. There will be viewers who don’t see any problem with this — indeed, it is great to see more black people in Korean entertainment — and that is fine, but those who don’t feel comfortable with it aren’t in the wrong, either. 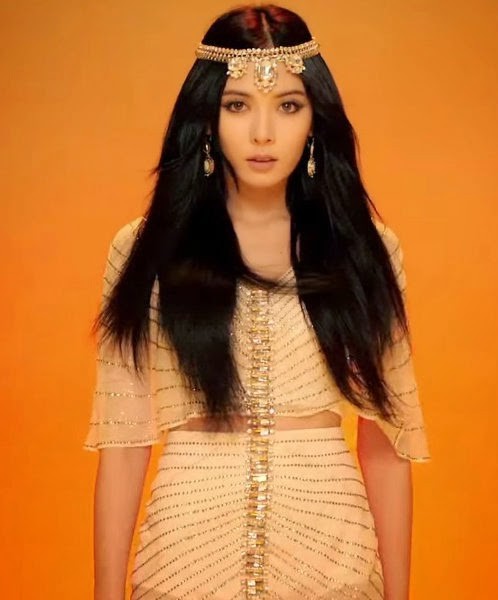 Just as we’ve seen inspiration being drawn from Beyonce and Miley Cyrus, the Ancient Egypt sequence is reminiscent of Katy Perry‘s “Dark Horse,” and that MV also has a problem with the way it positioned men of colour in relation to white women. And while Hyuna isn’t white, we’re seeing shades of the same kind of positioning in “Red.” Whether the MV achieves its goal of making Hyuna an aspirational brand is one thing, but it definitely does uphold and shine a light on her well enough without teetering on the racism line. And if Cube must insist on it, then can we at least have a cooler US pop culture reference, like surrounding Hyuna with a trio of fire-breathing dragons or something?

But ultimately, Hyuna doesn’t need all of that. She makes it work on her own, and the above does nothing more than alienate fans and viewers. She doesn’t come across as having the boldness and strength that the colour red symbolises, but Hyuna works with what she has to make her the star of this show; and Cube isn’t exactly helping her with the mise en scene, that’s for sure.

Live performances: watch for Hyuna, and only Hyuna.