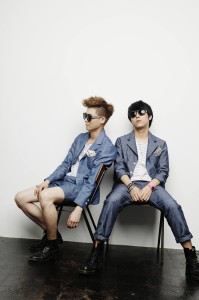 Hey, Indie Gem-ers! Welcome back to another edition, where we bring you our favorite Korean indie recommendations.

Today we will be talking about The Solutions, who have put out one of my favorite EPs to date this year. The band comprises Sol and Naru. Both play guitar, sing and compose, though Sol focuses more on being the lead singer, whereas Naru’s attentions are on guitar and composing. Before starting The Solutions they each had solo careers, and their mature songs reflect their previous experience.

On first listen, The Solutions might sound familiar. The band takes inspiration from ‘90s Brit and American rock, recalling groups like Oasis and The Smashing Pumpkins. Fortunately, instead of copycatting, The Solutions’ music is a blend of sounds that creates work that’s truly their own. It may be odd to call a rock band “elegant,” but The Solutions’ emphasis on melody and guitar makes for thoughtfully crafted tracks that are both refreshing and nostalgic. They prove that a band does not have to reinvent the wheel with each song; a group can fit into a well-defined genre and sound, and still give its audience something interesting and fun to listen to.

They released their first self-titled album in 2012, with the title track “Lines.” Though the band’s sound has evolved with their 2014 album Movements, “Lines” still provides an excellent introduction to the band’s signature sound and characteristics.

Like most of their songs, “Lines” is sung in English. It speaks of two people wandering through life on parallel lines, then meeting by accident; it inspires listeners to think about the impact of moments like this. Wrapped in the lyrics are complicated feelings of hesitance and hope, which are juxtaposed by the seemingly simple instrumentation. The repeating guitar rhythm and drumbeat suggest calm, but the vocal overlay and build-ups give the song waves of passion, creating a fitting atmosphere for the lyrics.

Though songs like “Lines” fall on the calmer side, other songs from The Solutions pull in danceable beats, like “Sounds of the Universe.”

“Sounds of the Universe” shows how The Solutions utilizes repetition and melodic overlays to create a piece that is upbeat, dance-y and slightly hypnotic, while still keeping with the style of “Lines.” Following this vein, their next EP Movements plays much more with synth-pop, exemplified by the stellar lead track “Movements.” The MV is a performance video, where the members take turn playing all the instruments in the song.

“Movements” contains many more electronic elements, but the core of what makes The Solutions’ music elegant — simplicity, bare vocals, carefully constructed guitar — remains. When synth is utilized, it does not overpower the instruments but rather works with the melody to achieve a nice balance. The interwoven refrains at the end of the song are particularly well done, blending Sol’s sustained notes with driving, repeated lines, not only illustrating some fine craftsmanship, but also guaranteeing the song will be stuck in your head for days.

A favorite of mine off Movements is “Jungle in Your Mind.” It’s got that more classic rock sound, with a solid downbeat and easy rhythm, while keeping with the band’s growth and upbeat feel. Here is a live version of the song that shows off their fun energy and how ridiculously clear Sol’s voice is:

Admittedly, part of the reason I like this track is because it strikes a personal chord. While this may sound cliche, the song reminds me of the days I used to spend as a kid lying around listening to rock albums, either digging through my stepdad’s records or buying random CDs. Going through Movements I experienced a rush of memories, while simultaneously enjoying a new band’s music, which is a great feeling. Maybe that is the best part of what The Solutions can do. Their music is well done and it stands on its own, but it also stands shoulder-to-shoulder in a bigger pool of artists, reminding us of the music we’ve loved, where that music is now, and where that music can go in the future.