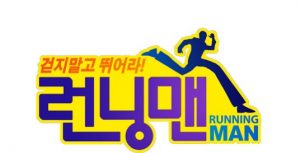 Running Man, the infamous staple of Korean Variety, has hit hard times recently with increasingly low ratings. Of course to an extent this is natural; it’s hard to consistently come up with new material when you’re nearly at 350 episodes. Producers face multiple issues including the challenge to find ideas and games, a cast who are so familiar to each other and with roles so well defined they can become tired and predictable, and the fact that the cast themselves are ageing and sometimes injured, thus no longer always able to commit to physical challenges like the famous bell chase.

To address this, firstly, there were changes in the Production team, hoping that bringing in new blood would bring originality. Ratings did not improve and Running Man announced a cast lineup change, but this was fraught with tension and controversy. Kang Gary chose to resign from Running Man in order to focus more on music. Then Kang Ho-dong was announced as a potential new cast member but shortly after, Kim Jong-kook and Song Ji-hyo were informed that they would not be continuing with their roles. Kim Jong-kook reportedly found out through a phone call and Song Ji-hyo through media headlines, angering many fans who found their sacking to be abrupt and insensitive at best. As a result of the controversy, Kang Ho-dong chose not to join the cast and after backtracking and apologies by the production team, Kim Jong-kook and Song Ji-hyo agreed to stay on. 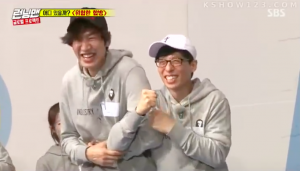 Running Man’s relationships, character roles and cast interaction was one of the central pillars of its success and comedy. Throughout the episodes, we have seen Yoo Jae-suk as “Yoomes Bond”, “Yoruce Willis” and “Grasshopper”, Ji Suk-jin as “Big Nose Hyung”, “Impala”, one half of the “Easy brothers”, Kim Jong-kook in his incarnations as “Tiger”, “Lion”, “The Commander”, “Mr Capable”, and variations of “Sparta”. Song Ji-hyo is known as “Ace” or “Blank” Ji-Hyo and previously with former Running Man Song Joong-ki, the “Song Song Siblings”, and was the other half of the “Monday Couple”.

One of the best examples of evolution and change in terms of roles is Lee Kwang-soo. Kwang-soo began as “Framer Kwang-soo”, making up stories to bait other members, transitioning from this role to the other half of “Easy Brothers”, “Betrayal club”, “Kwangvatar”, “Giraffe”, and more recently, undergoing the change to “Prince” as a result of his popularity with fans throughout Asia. Likewise, it’s been a long time since Kang Gary, (“Peaceful Gary”, “Gaecholas Cage”) and Ha Dong-hoon, better known as HaHa (“Haroro”, “Harad Pitt”) have played the role of Kim Jong Kook’s “two kids”.

From here on, there will be spoilers on the recent episodes. If you haven’t watched the new episode and do not want spoilers, then please leave this article now!

Now, from Running Man episode 346, we have the addition of two new members, Yang Se-chan and Jeon So-min. But can they help Running Man out of its current downwards ratings spiral? With the addition of new members, it’s expected that both Se-Chan and So-Min will gain their own character roles, and hopefully assist the original members to transition into different and more varied relationships of their own. It is particularly intriguing to consider the potential development between two regular female cast members– something which hasn’t been an option since the brief time when Lizzy (Park Soo-young) was a member of the Running Man team in 2011. 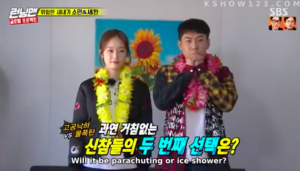 For Se-chan and So-min’s first episode, we don’t have a particularly promising beginning — after the usual cacophony of preview images, we open the episode to what is becoming an increasingly common Running Man set up — a giant box. Running Man producers seem to have been turning to increasingly flashy stages in an attempt to stall the ratings decline, but even this has become tedious. The stunts like lifting Se-chan and So-min into the air with a giant crane feel like they’re there for the sake of it, rather than having a real purpose. At the same time, what was once playful, enjoyable banter at the beginning of the show and real shock on the part of the Running Man cast has vanished and the dialogue feels forced and occasionally almost grumpy. So can Se-chan and So-min turn the episode around?

In the first section, two opportunities were missed — a proper introduction for the two new members and the chance for Se-chan to distinguish himself as an individual character. Oddly, instead of giving both new members an in-depth introduction, we jumped straight into the episode with only brief glimpses of previous guest appearances. Considering the significance of adding two new members, the first since 2011, it would have been good to see more of an invitation for the audience to make links to their past appearances and identify with their characters. It was almost as if they were showing a guest rather than new members. 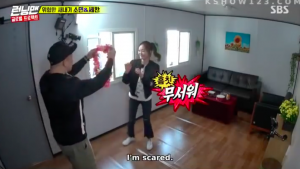 There’s little new content in this episode in terms of games or concepts but we see some promising elements in both So-min and Se-chan. So-min is the first to arrive, and shines brightly from the beginning of the episode; sunny and vivacious. She’s the perfect antidote to the tired and unsurprised reactions of the original cast members, reacting with paranoia and wariness as she tries to avoid the producers with the comment “I’m scared!”. Her later statement to the producers “I know you aren’t always this nice… I heard you guys are bullies!” shows an endearing bluntness that will serve her well.

Whereas Ji-hyo can come off as blank and stilted, So-min’s bouncy and vibrant reactions set her up as a new personality immediately. She has a good rapport with Kwang-soo, thankfully not stifled into a love line, and betrays HaHa hilariously and without regret. Her playful lack of shame also brings out Se-chan’s cheekiness, with the two teaming up together to give ice showers to the original members. Se-chan and So-min enjoy playing on Kwang-soo’s misfortune, creating a solid momentum and building a possible betrayal character pathway for So-min, the original cast even stating, “We’ve never had a female betrayer”. 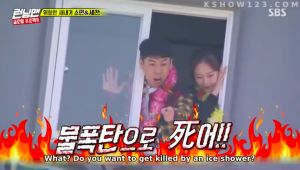 In contrast, Se-chan makes a slightly weaker entrance — his personality doesn’t distinguish him from the original cast in terms of character quite as clearly as So-min. He immediately acts like other members, comfortably taunting the original cast but not bringing anything different to the table. If he’d pretended stress over challenging his sunbaes (with the obvious exception of Kim Jong-kook), that would have at least been a new dynamic. Se-chan apparently came highly recommended from Kim Jong-kook, but this idea is never built on and goes nowhere. That said, his eager excitement (especially the clapping) was adorable. He shows promising glimpses of eagerness; it’s been long enough that Running Man could definitely benefit from another “Enthusiastic Joong-Ki” type role, where the player is utterly, adorably convinced and confident, right up until the point where they fizzle out and fail embarrassingly.

We finish the game on a weaker note with further character blurring. Letting the original members dunk the new members in ice water as payback would have been great if it weren’t for the same double standard as always: Se-chan gets the ice water while So-min escapes unscathed. Though in fairness, this may have been because she didn’t have a change of clothes. I’d hate for So-min’s character to be limited by her gender — Ji-hyo, despite being the “Ace”, had a number of episodes where she was resigned to being the princess and waiting for her prince. 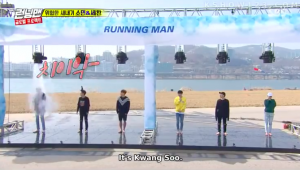 We also see more role blurring as it’s made clear that, like Ji-hyo, So-min has good luck, and, like Jae-suk and Kwang-soo, Se-chan has bad luck. Se-chan, the new “King of Misfortune” is the symbol of negativity… to the point where they actually use editing to show cartoon excrement falling on him. I wanted more for Se-chan than a copy of Kwang-soo’s character, though it may free up Kwang-soo to evolve into a new role. Unfortunately, with the overdone exclamations and build up, the “lucky/unlucky” joke which was once fresh and could believably be coincidence, now seems progressively more unrealistic and scripted.

What did work was So-min and Kwang-soo’s relationship — on the bus I feared they’d be given a love line, but we were instead gifted with So-min and Kwang-soo bickering. I’d like to see a continuation of this brother/sister relationship, including petty revenge and pranks if possible — or even betrayer versus betrayer. It would also be nice to see Se-chan and So-min together in the “two kids” team role, innocently naughty and adventurous. Unfortunately, being the “two kids” and leaving the original characters alone defeats the purpose of adding new blood. In an ideal world, we’d see the addition of further Running Man cast members, to really force new relationship dynamics. 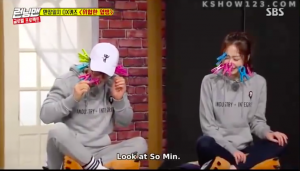 t game was well played, and quite enjoyable, but had the emphasis on the wrong things. Running Man producers cut too much game time from the show in favour of long winded speaking and arguing. Still, the screaming reactions from Jae-suk and So-min were hilarious the first time the conveyor belt disappeared into the mystery room, especially when they limped out covered in pegs. Se-chan shone in this section, charging into the mystery room like an eager puppy, to smugly return with his bucket of chicken. Similarly, his surprise pick of HaHa right at the end of the episode showed a cheeky innocence that has been missing from Running Man for a while.

It’s a tried and true staple of Running Man to rank and comment on each other’s looks, but I felt sorry for Se-chan, who went from the co-“Ugliest Running Man” to suddenly “Ugliest Man in the World”. This didn’t work for a few reasons — I hate the feeling that at some point the cast members must internalise these negative messages, as well as their audience, but it also felt like he was just replacing Gary. It’s too soon to copy Gary’s character, and the comments about liking Ji-hyo were also worrying. The “Monday Couple” love line became increasingly stale and replicating it with Se-chan should be avoided at all costs. 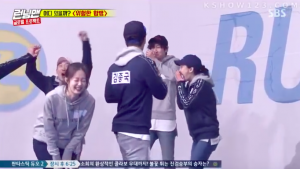 The final game was definitely the highlight for me in terms of personality and genuine feeling. While the game itself was plain and simple, there was a message that the producers should heed: you don’t need a flashy set up to film a good scene — you need good quality member interaction. The cast showed mischievous excitement and childish glee at the thought of taking down the other team (“We’re nuclear bombs!”) and showed the absolute best of Running Man — their real personalities. It was wonderful to watch them giggle quietly with each other, anticipating Jae-suk and Se-chan’s entrances. This genuine interaction and excitement is something that is often missing in their more recent episodes.

Overall, 346 was only a solid episode through the novelty value and charm of So-min and Se-chan. My advice to the producers would be to avoid setting Se-chan up to mimic the roles of the original cast and go further and add even more new members. In addition, it would be a mistake to move completely away from the bell chase. While not every game needs a bell chase, it is one thing that sets  Running Man apart from other variety shows and is dear to fans’ hearts. The addition of two new members on its own isn’t enough to save the show; they must distinguish themselves and help the original Running Man cast evolve from rusted-on roles.

While the new members haven’t proven what they’ll do either way, I think there’s definite potential for both to lift the show.

Have you watched the latest episode of Running Man? What did you think? Sound out in the comments below!