If you’re thinking about the overly used phrase that is mega annoying, then don’t worry: this article doesn’t have any of those. The stereotype of K-pop idols is that they all get along and have super clean and almost robotic personalities, but that gets boring real quick. Realistically, not everyone is going to get along, nor are they super lovey-dovey towards each other. There have been some instances when there has been beef between members, and sometimes it turns ugly and/or pathetic.

This case is actually sad because this feud is because of something that could be fixed by a simple phone call or meeting.  In November last year on Happy Together 3, one of the members of DJ DOC, Lee Ha-neul, briefly mentioned that a former member of the group, Park Jung-hwan, lacked a sense of rhythm, and therefore was replaced by Jung Jae-young after the first album. In retaliation to all this, Park Jung-hwan sued Lee Ha-neul on account of slander, saying that this broadcast negatively affected his car importing business and his emotional state.

When Ha-neul got the news that Jung-hwan was suing him for slander, Ha-neul went to the radio show Kim Chang Ryul’s Old School to apologize, but this infuriated Jung-hwan even more, so Jung-hwan added an additional charge to Ha-neul because Jung-hwan felt ridiculed and that Ha-neul’s apology wasn’t sincere. Ha-neul mentioned that he and Jung-hwan should settle things outside over drinks, and that he would purchase one of Jung-hwan’s cars. Realizing that his apology didn’t sound as sincere, Ha-neul further apologized and additionally mentioned that he would retire from the entertainment industry to further prove his sincerity, but it was to no avail since Jung-Hwan did not back down from suing.

After 4 months of going back and forth in court, on Febuary 22, 2012 the court ruled that Ha-Neul was innocent of all the charges held against him, but Jung-Hwan was infuriated at the court’s decision and has applied for an appeal. Currently there hasn’t been an update on the court’s decision, but this has been one ugly court battle. 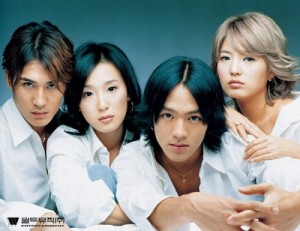 Unlike the last case, this feud dealt with an actual fist fight. S#arp was a co-ed group that debuted in 1998. After a few member changes, the final roster consisted of Chris Kim, Jang Seok-Hyun, Lee Ji-Hye, and Seo Ji Young. From the beginning the female members of the group S#arp did not get along at all due to their personalities clashing.  Even though S#arp had plenty of number ones, the female members still could not get along with each other, to the point that for the photoshoot for their 5th album (which was also their last), the female members’ pictures were taken separately for group pictures. The time bomb eventually blew up on October 8, 2002. The incident allegedly involved Ji-Hye hitting Ji-Young in an elevator at the KBS hall, but the details of the story are still a little suspect. In one press conference Ji-Hye explained that Ji-Young was verbally abusing her to the point of retaliation, but in a separate press conference Ji-Young mention that she hadn’t said anything with profanity.

This scandal continued to escalate to the next day and continued to be shady. After the first rehearsal for Music Bank , Ji Young suddenly did not want to go on with the second rehearsal, and afterwards a series of she said/she said accusations ensued. According to Ji-Hye, she noticed a lack of motivation from Ji-Young and tried to reconcile with her, but instead Ji Young not only ignored Ji-Hye, but also complained to one of the co-members, Seok-Hyun, and called her mom, who rushed to the studio to cuss at Ji-Hye. Ji Young’s mother also hit Ji-Hye in the back of the head. On the flip side Ji-Young called Ji-Hye a liar, and that she mistook Ji-Hye for someone else. Ji-Hye then struck Ji-Young on her face and neck. Ji-Young sustained injuries and was hospitalized on October 11 due to a nervous breakdown. On October 14 of that year, S#arp’s management company, World Music Entertainment announced that S#arp had officially broken up.

There have been others that fought or are awkward towards each other. There was even a show called Intimate Note dedicated to reveal that not all idol members are lovey dovey towards each other. Episodes included SNSD, Super Junior, and Fly to the Sky to name some.  Is the show scripted? Perhaps, but we know that not everything is shown to us, and that there’s so much more behind the scenes, and if they are not careful things can blow up.