After taking in some considerations (with special thanks to Nani Urbuznezz), the next to be featured in this edition of K-pop Vintage is… 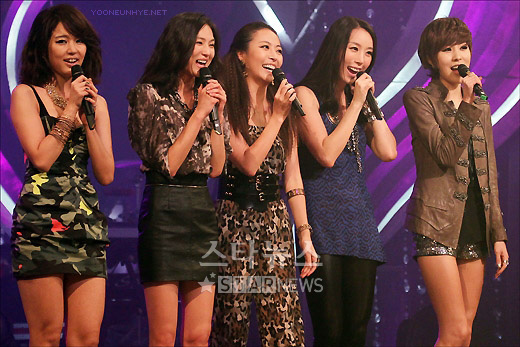 Baby V.O.X which stands for Baby voice of expression (no idea where that came from or what that is supposed to mean) is considered to be one of K-pop’s girl group pioneers. The main three girl groups in the late 90’s/early 2000’s were S.E.S, Fin.K.L, and Baby V.O.X. This group had numerous #1 songs such as “Get Up”, “Killer,” and “Betrayal,” but not everything was great for Baby V.O.X. They definitely had their fair share of turmoil and failures, so without further ado let’s dive into the history of Baby V.O.X.

The Baby V.O.X we all know was not all part of the original cast, and out of the 5 members that we know today only Lee Hee-jin and Kim E-Z are; the original members consisted of those two as well as Cha Yu-mi, Jung Shi-woon and Jang Hyun-jung.  Baby V.O.X debuted on July 10, 1997 with their first album. The title track off this album was “Scissors.”  The overall concept for this album was edgy and cool.

Unfortunately Korea did not buy this concept; it was apparent with the track’s failure to chart well. To make matters worse there were rumors that there was tension between the older members (Cha Yu-mi, Jung Shi-woon, Jang Hyun-jung) and the younger members (Kim E-Z and Hee-jin).  Lastly Cha Yu-mi got injured during a performance and was swiftly replaced by Kan Mi-youn. After the first album promotions were over, Jung Shi-woon and Jang Hyun-jung were removed from the group due to conlicts.

Baby V.O.X had a revamp for the second album. At this point, Shim Eun-jin and Lee Gai replaced Shi-woon and Hyun-jung, and the image was change from edgy to sugary cute which was popular during this time. Baby V.O.X released their second album Baby V.O.X II in April 1998. The title track for this album was “Ya Ya Ya.” This song was their first success since it managed to chart as high as #7 on the pop charts.

Unfortunately, there was something wrong among this success. One of the members Lee Gai lied about her age. She stated that she was only 20,when she was actually 30 years old at the time. Because of this lie Lee Gai was kicked out.  For the third album Lee Gai was replaced by Yoon Eun-hye, and Baby V.O.X released their 3rd album Come Come Come Baby on July 22, 1999. The first single coincidentally was the first Baby V.O.X song I heard, “Get Up.”

This song rocketed the group to land its first number one, and even their follow up, “Killer” was also a number one. The success continues with the group receiving numerous awards including the best singer award from the Seoul Music Awards beating other popular acts like H.O.T. The last song the group promoted from the album was “Missing You” which is arguably the best ballad song from them.

The success only continued with the 4th album Why for which “Why” was also the title track alongside “Betrayal.” They released the album on May 16, 2000 and had similar results as the third album, but not any number ones.

On March 30, 2002 BabyV.O.X released a special album that contained famous songs from their previous 5 albums along with two new songs “Coincidence” and “Go.” “Coincidence” managed to get the top chart position, and was the group’s first number one in three years. Because this was around the same time as the World Cup, they also released a special World Cup music video.

On April 3, 2003 Baby V.O.X released their 6th album Devotion. Along with releasing an album, the members (sans Eun-hye) participated in a semi nude photo shoot. During this time it was a controversy because no other group had done such a thing, but the controversy died down when the actual content of the photo album what tamer than what the media had thought. As for the album itself the title track “What Should I Do” managed to hit number one. Along with promoting this album in Korea, Baby V.O.X also promoted outside the country. Baby V.O.X became the first girl group to perform in Mongolia; they topped the Chinese charts with the Chinese version of “I’m Still Loving You,” and managed to get #3 in China and #4 in Thailand with “What Should I Do.”

Unfortunately this is when things start to unravel, and there is a saying all good things must come to an end. On March 3, 2004, the group released their last album Ride West. As the album name points out, the group changed their image to a westernized image. Their title track “Ecstasy” features Floss P and 2Pac.

Even though the group’s company DR Music, claimed that they got permission to use 2Pac’s rap, this infuriated 2Pac fans, and apparently DJ DOC as well. DJ DOC publicly denounced the group going so far as to call them prostitutes.  This led to a legal battle between DJ DOC and Baby V.O.X, but ultimately DJ DOC apologized and Baby V.O.X got compensated. “Ecstasy” and the album itself did not meet the expectations, and after the failure of this album the group went on hiatus. On December 27, 2004 Shim Eun-jin left the group, and one by one people started to leave the group, and eventually the group disbanded in 2006. 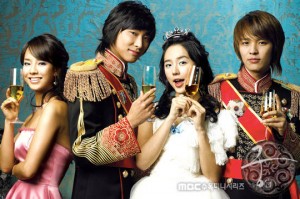 So where are they now? Out of the members, it is apparent that Eun-hye had the most success. Eun-hye transitioned from being a singer to an actress. She left DR Music in 2005, and was without a company for a while until late 2005 when she signed with Eight Peak, but that didn’t stop her from appearing in some tv shows. Eun-hye was a regular guest on the popular variety show X-Man and was famous for being athletic along with having a romantic chemistry with another regular guest of the show Kim Jong Kook. After a year, Eun-hye left the show to jump start her acting career, and ever since then she has been successful in her acting career. She has been in many popular dramas like Goong and Coffee Price. Even though she transitioned to an actress she still has some collaborations and featurings. The  most famous solo song is when she collaborated with rookie group at the time Mighty Mouth with “I Love You.”

Hee-jin and Eun-jin somewhat faded to the background. Even though Eun-jin released a solo album titled Zeeny’s, the album sales were mediocre, and she hasn’t released any material since then. Kim E-Z went on a different route and went to college, and has a stint as an emcee for MNET. Kim E-Z also got married to a stock broker on April 2010 and had a baby in April 2011.  Mi-youn is the only member to really remain a singer. She has released 2 mini albums and a studio album in Korea. Her most famous thus far has been “Paparazzi,” which managed to stay in the top 7 on Inkigayo for three weeks straight. 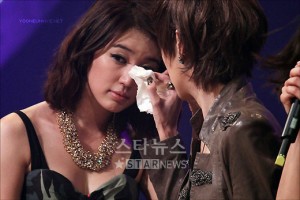 Along with having solo careers, the members have had their fair share of reunions. These reunions include appearing on the tv show Chocolate and Kim E-Z’s wedding. On August 22, 2010 Baby V.O.X performed on the show and it was the first time in six years that they performed together. They performed a medley of their past hits, and during the talk on Chocolate, Eun-hye had an emotional moment during the performance because she was grateful for her members. Along with Chocolate, the members also performed “Ya Ya Ya” on Kim E-Z’s wedding minus Hee-jin. Even though they have broken up for around 6 years now, it seems that they still keep in touch. Let’s see what the future will hold for them down the line.

Do you guys remember Baby V.O.X? Have any requests? Feel free to comment below.