According to Dictionary.com, noraebang is “the act of singing along to a music video, especially one from which the original vocals have been electronically eliminated.” 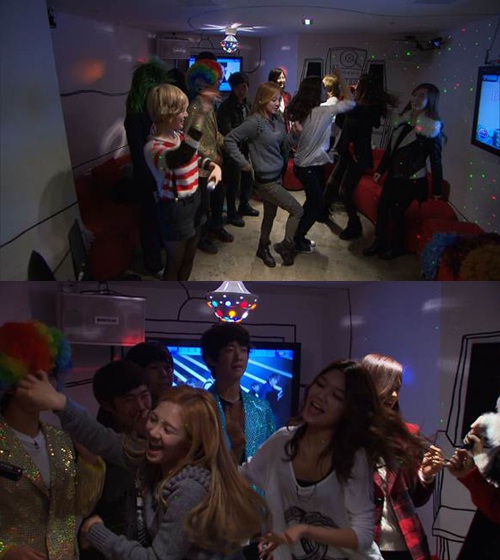 If you guys haven’t gone yet, I’d strongly recommend it because it’s genuinely fun and/or relieving, regardless of your ability to actually sing. If you cannot sing, don’t go with anyone who can sing really well because then it just becomes a mini concert. Trust me — I’ve been in that situation before. On the same note, don’t go with anyone who sucks outrageously, unless you feel like throwing chairs, microphones, or anything throwable at those kinds of folks. But once you find that perfect group to go to noraebang with, then all is well. I don’t exactly know what exactly everyone sings at noraebang nowadays. I am assuming most of the songs now are all SNSD, Super Junior, Wonder Girls, and so on, but here are some of my own noraebang favorites. [Warning: I’m about to go old school.]

2. Park Jin Young – She was Pretty Everyone should know who Park Jin Young is, but if by some WEIRD reason you don’t, he’s the JYP of JYP Entertainment, who was also a singer back in the day. This song has been ingrained in my head since I was in elementary school. As I came home from school everyday, this song would be blasting in the car, so as a result, this was the first Korean song that I sang. The lyrics are simple and the verses repeat each other, which is a great song for newbies. Lastly, this song has the JYP funky sound that he loves to do, which I love.

3. G.O.D. – Lie Every Korean above the age of 18 probably knows this song. Who else has fans that can keep up with the rap?

Classic, classic, classic! No matter how old this song is, I still love listening to it. This song is such a great song because of its timeless quality. I never watched the drama Stairway to Heaven, but everyone told me that they cried buckets over this song, so it doesn’t hurt to check out the drama as well.

When I visited Chicago, I would go to my cousin’s place to hang out. The most distinct thing about my cousin was that fact that she fangirled over the main singer in Sechs Kies, Kang Sung-hoon. Because of her fangirling, I guess this song is also ingrained on my mind. Besides the brainwashing, I really like the chill, laid-back melody of this song that we don’t get to hear as much these days.

This song should only be sung by those that can sing. If you butcher this song, then I will come hunt you down a la The Ring. I like singing this song because it brings the inner romanticist in me, and I definitely recommend you bring the girl you like to hear this song. I am not a really affectionate person, but songs like this can thaw the coldest of hearts. Who doesn’t want to hear “nothing better than you?”

Need a sexy song or a song to completely butcher and parody? Then look no further then this Love Song. This song screams SEX. I mean, look at the dance moves. Kind of suggestive, don’t you think? Anyways, since I’m an awkward turtle, I take the funny route. Regardless of what you do with song, it’s easy to make this song your own.

Those were some of my noraebang songs, but what songs do you absolutely need to sing at noraebang?