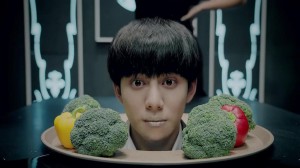 Despite having debuted in 2011, Block B has had it’s share of controversies. Just when they had produced a song that screamed ‘chart hit’ (“Nanrina”), the Thailand incident happened and that led to the boys taking an eight month reflection period.

After this reflection period, they then announced their comeback with ‘Blocktober’ and gave us “Nilili Mambo” as well as their first full-length album Blockbuster. Given the quality of the MV and the album, it seemed that things were on track for Block B. That was, until 2013 came and news of the boys filing a lawsuit against their agency, Stardom Entertainment, hit the ceiling. Despite the boys having a seemingly good legal team — and unanimity in their decisions — the courts declared that the lawsuit would be dismissed, effectively returning the boys to Stardom’s jurisdiction.

This comeback, termed by fans as Blocktober 2.0, is complete with their third mini-album, Very Good. Given their history and reputation, just what do Block B bring to the table for this round of promotions? Their second rebirth, if you will.

Let’s be honest, the first time anyone watches this MV, they will be thinking “Was G-Dragon a consulting stylist for this?” because there are numerous similarities in terms of stylistics and video technic. I’m not saying G-Dragon owns these concepts, because we all know nothing is truly original in anything pop, but he is the most popular user of these concepts in K-pop. 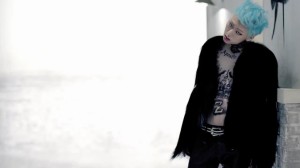 And then you take a step back and watch the MV with the lyrics and you instantly know that everything in this MV is a parody and a satire of itself. When the septet had first debuted, they were called Big Bang copycats due to them also being hip-hop influenced idols — and in the same way, every hip-hop influenced male idol group has also been called copy cats of these two groups. But I digress. The boys acknowledge one part of their reputation to those who are not fans of theirs but also waiting to see what they bring forth — they know this MV will be watched and what better way to get people talking by finally saying “Hey! Since you guys already think of us as Big Bang copycats, eat your hearts out.”

So what they do is take things they know will be noticed as something Big Bang has done, and run with it. Taeyang from “Fantastic Baby” is parodied by Zico,who’s dressed in a black fur coat, with several temporary tattoos added to his existing tattoos. In fact, this MV is almost similar to “Fantastic Baby” wherein at first watch, there is no plot — it’s just them being wild. I say almost because with Block B’s “Very Good,” it is not structured fun but rather chaotic fun.

The artist they really parody is G-Dragon, since he and Zico are often compared to one another. There is the obvious throwback to “One of a Kind” with Kyung’s scenes at a dinner party. The difference? It’s Kyung that’s being served — just another day of his cucumber showing. But it can also be a throwback to “Nilili Mambo” and his infamous chicken scene; after chasing a chicken for dinner, he’s now waiting for dinner to be served. Another prominent part features the group’s members spinning a camera around in a room — cue P.O and U-kwon — which is in reference to  “Crayon.” Again, while it’s not only G-Dragon who uses these kinds of shots, he is the most known example. 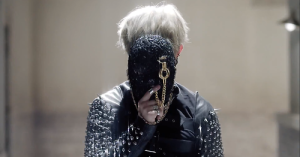 Apart from Big Bang, there are other K-pop references. We see this in one scene where U-kwon is in a leather get-up with a mask. While several viewers may’ve compared this with Jaejoong’s “Mine” MV, I’d say that Jaejoong is just one of their many reference points –Block B seems to be highlighting the influx of gothic MVs that we’ve seen this past year, in their absence.

Apart from referencing K-pop, the MV also highlights other celebrities — like Miley Cyrus. Everyone knows of her insane VMA performance; we see Zico parodying her hairstyle in some dance shots, and him having a chair-and-skull-shaped-scepter moment in some others. Apart from this, it’s quite obvious that inspiration was drawn from The Dark Knight and Payday II.

All of this is supported by the lyrics that takes jibes at several idol acts.

They try so hard but they’re so cute

I really won’t need to name names or even expand on these lines because anyone who has followed K-pop for a while knows what they mean.

Surprisingly, they also manage to slip some social commentary into the MV. Remember all those times where we got a boob shot in an MV? Well, there’s one here, but unlike others where the scene has been used for purely cosmetic reasons, the girl in this MV actually gives Jae-hyo a beating after he not-so-discreetly ogles her. And thus, for two comeback MVs in a row, we have Jae-hyo not only flirting with a girl, but also being rejected (well, he was rejected in the Blockbuster teasers).

Here, we see the subversion of what is anticipated — the resident flower boy of Block B is not only rejected, he’s beaten up right after ogling a girl. Aside from this, we also get the running gag that Jae-hyo, despite being the visual, is always being turned down. 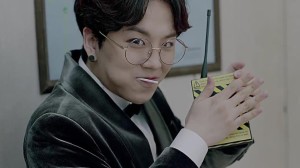 We also get a shot that is not often seen in K-pop. This is the one where two women — who are extras throughout the MV — are seen getting a little cozy with Zico at 3:33. They’re not the waif-like types that we see every so often; it’s also refreshing to see them being portrayed in this light.

“The seven kids who recklessly run.” With Kyung’s opening line in his rap, the song signifies the rejuvenation of Block B. Making clear that they know where they stand, they acknowledge their reputation in the song and in the premise of the entire MV.

Instead of a police chase after their bank vault takeover, the boys can be seen flailing around and having a wild time — while possibly taking a stab at Stardom. It seems that what they’re really robbing from the bank is their robotic nature, where there are steps, rules and regulations to everything. It’s easy to see the bank as an analogy for the K-pop industry, a scene that hasn’t been the perfect mold for them.

So, what we have with this comeback is not a group starting afresh after recovering from damage caused by scandals and the like; they’re looking the tiger in the eye and playing up some of what’s been said about them. Why change something that already works, why not go with the flow? Block B isn’t a cookie cutter idol group, and the boys know it. 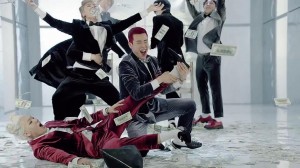 The whole MV can also be seen as a throwback to “Nilili Mambo” — they’re the incompetent fools who’ve tried to steal something. In “Nilili Mambo,” it was diamonds. With “Very Good,” they escape without their loot, but that doesn’t matter as the actual prize is the havoc they’ve caused. Could this be another swipe at Stardom?

The “Very Good” MV is not the structured fun we get from other idol acts. Instead, the MV is everything Block B is: chaotic, playful and silly. There’s no sense of seriousness with Block B, thus there is none in the MV as well. The bottomline? The boys take charge of their reputation, one that can hardly be called or classified as manufactured.

While the song may not be perfect, the “Very Good” MV is just that with a 5 out of 5. What do you think?