Side B: Block B's Winning Combination 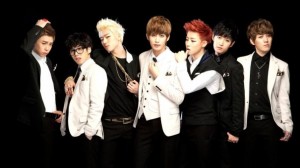 Welcome to another edition of Side B, or in this case, Side Block B. BBCs everywhere are rejoicing as Block B’s comeback approaches, but for those who haven’t listened beyond the group’s promotional singles, what better time than now to delve into their b-sides?

Famously formed by Cho PD, Block B (short for Blockbuster) debuted in 2011 with “Freeze!” The song boasted a strong hip-hop influence and rapper-line comprised of Zico, Park Kyung and P.O. Unfortunately, our good friends at The Commission on Youth Protection flagged “Freeze!” as inappropriate, starting a long, scandal-ridden road for the boys. Despite setbacks, the group has put out some of the most memorable hits in the past couple years, such as “Nanrina” and “Nillili Mambo.”

However, what makes Block B fun to listen to is the variety of mixing and musical textures present in their songs, albums, and across their whole discography. While you’d be hard pressed to find a Block B song that doesn’t involve rapping in some form, the group has numerous melodic tracks that show off the members’ vocals — not only from the aforementioned three, but also from U-Kwon, B-Bomb, Jaehyo, and especially lead vocal Taeil. In this Side B we’ll explore both the hip-hop sounds that made Block B famous, and the cool, mellow tunes that complete their oeuvre.

First up is “Wanna B” from single album Do You Wanna B? Though the group did promote this song after “Freeze!” was censored, it was only for a short run. “Wanna B” serves as an introduction, and the lyrics describe the group’s hard work and badass attitude. It starts with the rapper-line right off the bat, illustrating the classic Block B sound: fast and bold with prominent rap sections, followed by strong vocals that build to a driving chorus. The track also layers digital sounds and plays with the bridge, which are traits we’ll hear in other Block B songs as well.

Next is romantic “U Hoo Hoo” from New Kids on the Block. The beginning sets the tone with a smooth, digitized U-Kwon against a light synth background, as Zico playfully interjects. This interweaving of voice and melody carries throughout the song, highlighting each members’ vocal quality without sounding disjoint. Spoken words and rap play over the melody, as do digital refrains, layering the song and giving variety in the verses and chorus; the bridge is particularly nice, as the singing switches among Jaehyo, U-Kwon, and B-Bomb, then turns over to U-Kwon and Zico for a rhythmic back-and-forth before following up with P.O and Kyung’s rap.

Another aspect of Block B’s music to appreciate is how their personalities emerge in the songs. Yes, they’re pop in structure and digital polish, but their tracks also display each member’s vocal color, as heard in “U Hoo Hoo” but also in the next b-side, “Halo.”

“Halo” — initially from New Kids on the Block, but is also included in Blockbuster — is a group introduction like “Wanna B,” but this time pares down the music to the drums. This definitely emphasizes their rapper line, but it works for the vocalists as well. Everyone gets a turn in “Halo,” which is reflective of the lyrics, and appropriately their individual voices create much of the musical landscape in this song.

Every group needs a sexy song, and “11:30” from Blockbuster is it for Block B. As the group played with various styles on this album, “11:30” begins untraditionally for the group with some smooth R&B-style singing from Taeil, B-Bomb, and U-Kwon. While the usual bells and whistles are present in the first few seconds, once the vocals come in the instrumentation falls to the background, similarly to “Halo,” but resulting in a different feel. The vocals shine here, but Kyung’s softer, yet controlled rap stands out as well.

Also off Blockbuster is “Movie’s Over,” a sad breakup song that also happens to be extremely pleasant to listen to. Though the song keeps a driving rhythm, the drumbeat drops in and out, allowing for other instrumentation to appear, which pairs with the singing. “Movie’s Over” is a Zico-heavy song, seeing as he wrote it and is the main vocalist, yet his voice serves as another stabilizing element along with the drums. As his voice drops out, the other members’ rise up, giving the song a full emotional push and pull. Even though B-Bomb only has the “whoa-whoas” to work with, they are effective as breaks throughout the track.

Since we have to stop somewhere, let’s end with an upbeat one from Blockbuster, “Mental Breaker.” A fun, romantic chase song, “Mental Breaker” mixes all of Block B’s arsenal — powerful rapping, dynamic vocals, humorous back-and-forth, and layers of instrumentation and digital effects to produce a song that flows, builds, and gets you dancing. And who could forget U-Kwon’s crucial “la-la-las”? I’m not being facetious; they’re the real hook. You’ll be singing it for days.

Though their career trajectory has been fraught with issues, Block B’s music is anything but. Their musical strength lies not only in the catchy choruses or clever mixing, but also in the way that each member contributes to the music, allowing for their personalities to emerge. Anticipation is high for their comeback, and hopefully this time around it’ll be smooth sailing with the focus where it should be — on their music.

Readers, what are your favorite Block B b-sides? I felt like I could have written about any of them!