What Jo Kwon's Drag Performances Reveal About Himself and Korean Culture 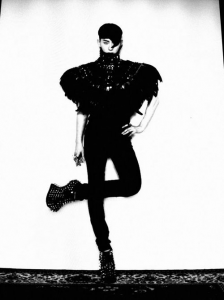 Jo Kwon, from the band 2AM, has been making tidal waves in Korea recently, thanks to his very fierce, but very frowned upon, cross dressing performances on the new variety show Golden Tambourine. Like several pop icons before him, Jo Kwon frequently blurs the lines between fashion and gender with his performances.

During his solo debut promotions in 2012, Jo Kwon made headlines across the country for his radical creative decision to dance around in 7 inch heels. He bluntly recalled in a press interview the mixed reactions from his team: “Some liked it, some didn’t and some said ‘That’s not right.’”

In the same interview, Jo Kwon remarked that the decision made him feel as though he was “risking [his] life”. Jo Kwon probably meant the comment quite literally: the Jeremy Campbell heels in question are notoriously tricky to walk in, let alone perform intricate choreography in. But the fear-stained statement is reminiscent of Hong Seok-cheon’s brutal blacklisting, succeeding his public outing on TV in 2000. Hong Seok-cheon’s bravery left his career in tatters, while transmitting a frightening message: homosexuality will not be tolerated in Korea’s entertainment industry. Fortunately, Jo Kwon’s gender-bending looks did not lead him to such fate. The Avicii-produced EDM bop “Animal” went on to be a smash, helping to cement Jo Kwon as a solo star in his own right.

But what is it about homosexuality that has Korea’s entertainment industry, and the country in general, so shook? In a nutshell, homophobia is embedded within Korean society due to its connections with both Confucianism and Christianity. Homosexuality controversially goes against the fundamentals of both of these beliefs. Several chapters of the Bible evidently condemn homosexual relations, leading many Christians to feel exceedingly unforgiving regarding homosexuality.

Meanwhile, Korea’s Confucian philosophy is concentrated on the idea that social factors, such as age and gender, determine one’s place in society. Therefore, Confucianism’s social harmony is disrupted by homosexuality, as it goes against the traditional essence of ‘the family’ (man, woman, child). Homosexuality creates a double whammy of taboo in Korea – quite simply, its ‘un-Korean’. 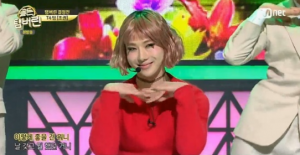 Now fast forward to 2017, and the singer is flaunting his flamboyant performative style again on Golden Tambourine (think Lip Sync Battle without the lip sync). Jo Kwon appeared on the show covering international stars Beyoncé and Sia, as well as home-grown talents Ga-in and legendary dance diva Lee Jung-hyun. Not so shockingly, Jo Kwon’s drag looks were not as universally praised as the pop divas he flawlessly impersonated. Here are just a small sample of the top netizen responses to his Beyoncé performance in particular.

He should tone it down.

Can he stop making it so obvious?

I’m grossed out by him now.

The prejudice exuded online is literally visible in the crowd shots of the performance; audience members look on as if the world is falling apart right in front of them, one ass pop and hair flick at a time. But guess what else you can see? Korean girls and guys enthralled by what they are witnessing, immensely cheering on the electric performances of their beloved Jo Kwon in drag. These are probably the same netizens who fired back at the haters with comments like “Leave him alone, let him do what he wants with his life”, and the encouraging proclamation that Jo Kwon should become “the representative drag queen of Korea”. While flattered by such a compliment, this is not about being a drag queen for Jo Kwon:

I think that I’m still lacking in the ability to pull off drag as an artistic form. My job is to sing, not to be a drag queen. 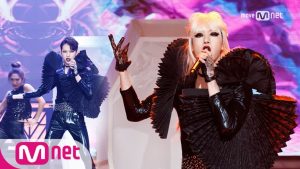 Jo Kwon’s appearances on Golden Tambourine have done nothing to dispel the rumors dancing around the camp singer’s sexuality. Fans have been speculating for years on whether Jo Kwon’s flamboyancy means he is a gay male. The singer has largely remained quiet on the topic and seemingly denies it. Many chose to interpret an ambiguous 2015 Instagram post of his as a rebuttal against the speculation on his sexuality. The post in question depicted a fictitious debate between Jo Kwon and ‘person’, who refused to accept that Jo Kwon liked ‘jjambbong’, a metaphor for ‘female, and instead chose to believe that Jo Kwon preferred ‘jajangmyun’, a metaphor for ‘male’.

However, when asked about why he performs in drag on Golden Tambourine, his explanation was simple: “This is who I am.” Jo Kwon also acknowledged that “there are people who don’t view [his performances] positively.” He reinforced his words with his swansong on the show, a theatrical and very powerful performance of Lady Gaga’s iconic LGBT anthem “Born This Way”. “I was born this way” and “God loves everyone”, Jo Kwon shared on social media about his final performance.

Despite not wanting to join in on the speculations, it’s really tough not to take Jo Kwon’s message as a cryptic admission of his sexuality. This is about as publicly ‘out’ as you can get in Korea’s entertainment industry, which is notoriously harsh to its LGBT celebrities. You can count on one hand the amount of out and proud celebrities Korea currently has – three. Harisu, an actress, singer, and model, is the country’s first transgender celebrity. Movie director Kim Jho Kwang-soo became the first gay man to publicly get married in Korea. Of course, there is also the aforementioned Hong Seok-cheon. There’s also the case of openly gay actor Kim Ji-hoo whose tragic suicide in 2008 was, according to police reports, attributed to the public’s prejudice regarding homosexuality. 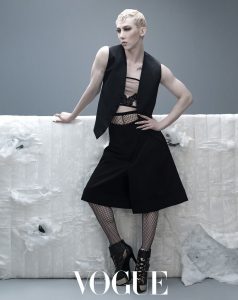 It gets better? Nope, it gets worse. Korean stars are regularly dragged on social media if they openly support LGBT rights. It happened when stars shared messages of condolences to the victims of the Orlando shootings, and even celebrating the country’s first gay marriage. Sadly, it’s no wonder why Jo Kwon wouldn’t want to admit anything openly.

Jo Kwon’s performances will be celebrated. He is one of Korea’s bravest performers, one who shines so brightly despite naysayers attempting to dim his light. His time on Golden Tambourine should hopefully inspire Korea’s LGBT community to continue slaying in the face of adversity because, no matter what, God makes no mistakes.

This piece was written by Hasan, aka ‘Becky with the Good Words’, a twenty-*bloop* year old human beiiiiiiiiing from London. 95% of Hasan’s daily thoughts are unashamedly consumed by pop music, and the other 5% is on hair. Interact with Hasan about all things pop on Twitter, or at her own site, sheBOPS.