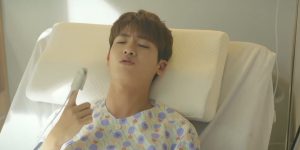 Plot is definitely not one of Strong Woman Do Bong-soon‘s strengths, making it difficult to centre a review around it. I focused the Episode 1-4 review on issues with the show’s humour, while the Episode 5-8 review explored the show’s problematic take on its theme of women’s struggles; now that we’re three-quarters through, it seems like a good time to take stock of where the characters stand, whether in their own terms or in relation to each other.

A weakness common to Strong Woman‘s humour and take on gender issues is the tendency to swing to extremes, paired with a severe lack of nuance. This weakness is inherent in characterisation as well, whether it comes to side characters or the leads. The former is tolerable, given how flat minor characters are quite frequent in dramas; the latter less so, because it compromises the story being told, and the viewer’s connection with the show.

This review contains spoilers for Episodes 9-12. We kindly ask that readers use spoiler tags in the comments when discussing the episodes that have yet to be reviewed. 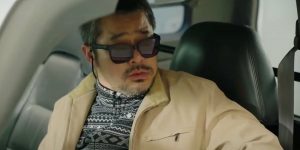 If we examine the broad strokes that make up the Strong Woman characters, they definitely seem quirky, winsome, and worth rooting for. But when it comes down to the actual execution, the show has done such a poor job of filling in the finer details that even at this point, with only four episodes left to go, the characters still do not feel rounded or layered. And this isn’t for lack of screen time; side characters and leads alike get their fair share of spotlight, which only emphasises the weak writing.

The flaws of the character writing seem to stem from two main problems. The first is a familiar issue: characters falling prey to a writer determined to create and manipulate them as plot devices; Gyeong-shim and Hee-ji are obvious examples. I had a niggling suspicion that Hee-ji was in this drama only so that she would become targeted by the serial kidnapper. Not only is this confirmed, but she is also revealed to be a red herring to distract the extremely inept but persistent Criminal Team 3; the real victim is Gyeong-shim.

Here, the writing is transparent: Bong-soon has been toying with the idea of pursuing the kidnapper for a while, but she hasn’t been forced to act on it. Throwing Gyeong-shim into the snake pit immediately gives Bong-soon the perfect reason to go after the kidnapper. On some level, it’s true that Bong-soon can’t just be busting into his lair without good reason, but this setup has two issues. Firstly, it’s logically loose: it hardly makes sense that, after a traumatic kidnap attempt, Gyeong-shim not only chooses to arrive in the neighbourhood by a late night bus, but also chooses not to tell Bong-soon that she is coming, and walks through the alleys alone, while listening to music which cuts her off from the surroundings.

Secondly, this setup that makes it seem as though Bong-soon is only prompted to take action when she has a personal stake contradicts how the drama has been trying to construct her since the beginning: as a heroine who will stand up even for people she doesn’t know, such as the high school boy being bullied by gangsters, or the lady being verbally abused by the driver who suddenly stopped in the middle of the road. 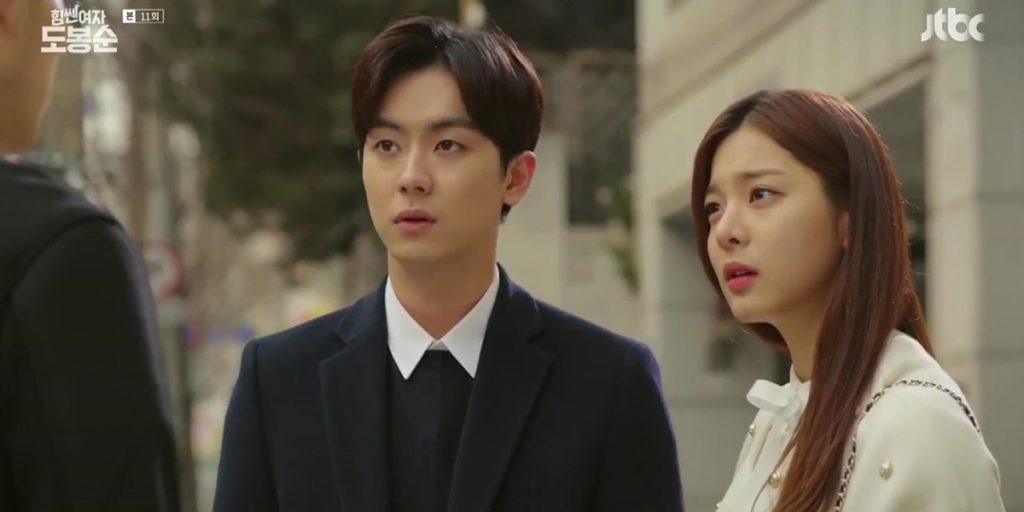 Gyeong-shim’s interactions with Bong-soon had the potential to draw out the viewer’s understanding of Bong-soon as a character better, but these were reduced to idle chatter about Min-hyuk or the aforementioned plot point, Gyeong-shim being in need of rescuing. Likewise, Hee-ji, who seems at this point almost an unnecessary character, could have been an interesting foil to Bong-soon, even if they have minimal interactions. They actually share a similar predicament: Bong-soon has been waiting for years for Guk-doo to like her back, to feel like she is the most important person to him, while Hee-ji has been waiting throughout the course of her relationship for him to treasure her instead of always casting her aside for work.

Yet they are also different: Hee-ji takes initiative to pursue whom she likes and to be frank with Guk-doo about falling in love with someone else, while Bong-soon is mostly passive, waiting for Guk-doo to like her back, for Min-hyuk to confess to her. But the show chooses to turn Bong-soon on Hee-ji, making plain Bong-soon’s dislike for Hee-ji simply because Hee-ji is dating Guk-doo, and later circumventing Bong-soon’s pettiness and rudeness by turning Hee-ji into a duplicitous woman who two-times (even if only for a short period). This simplistic love-rival mould forecloses more complex setups that could have brought the viewer a step closer to both Bong-soon and Hee-ji. 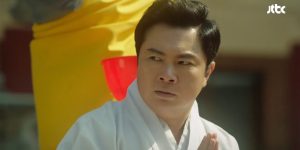 But what do we make of all the other characters, and why many of them exist when they don’t contribute to the main plot? The most feasible explanation is that their main purpose is not proper characterisation, but to serve the tone or produce desired effects in the viewer. The show keeps painfully returning to, and lingering on, the scenes with the Baek Tak party—even drawing out the revenge plot with a counter-revenge from Bong-soon’s worshippers—because it is the main comic fodder now that Bong-soon and Min-hyuk have moved past their bickering to sweeter interactions. The fractures between the three plotlines become exacerbated: the kidnapping crime has always been unrelated to the Baek Tak party revenge plot, and whereas this revenge scheme was partially connected to the progressing love triangle earlier, it has split off into its own runaway plot now.

The unrelenting determination to shove comedy down the viewers’ throats would also explain the most unnecessary and grating addition of the wailing banshee of a character, Oh Dol-Byeong (Kim Gwang-bok). The show hits a whole new low I hadn’t thought possible with this utterly twisted misrepresentation of a gay person; even if he had been straight, or if this character were written as a female one, which doesn’t drag in issues of homophobia, I can’t imagine how I am expected to find that much shrieking funny instead of painful.

As if its play on gay stereotypes and conflating homosexuality with transsexuality, and the trivialisation of sexual assault and the use of violence weren’t enough, the show decided to introduce another throwaway comic character, an exiled Buddhist monk from India played by an ethnically Korean actor, engaging in a mess of culturally and religiously appropriative conflations that South Asian viewers have elucidated here (although the latter commenter found it amusing, the comment concisely summed up the conflations). 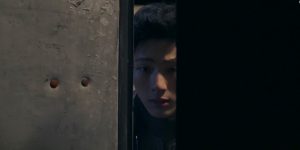 The same pattern of character serving tone, mood, or effect is unfortunately evident in the leads as well. Throughout most of the show, Guk-doo rushes in and out of scenes barking imperiously to almost everyone but especially Bong-soon; if writer Baek Mi-kyung were trying to nip second-lead syndrome in the bud, she hit the ball out of the park. Yet come Episode 11, when the circumstances call for pathos for him post-rejection, his behaviour suddenly tones down and becomes palatable. Ji-soo definitely got the shortest end of the stick in the casting of the leads; it’s not allowing him to display much range as an actor.

Even the much doted-on main couple isn’t safe from playing second fiddle to tone. In theory, their relationship has all the winning qualities: though from different social backgrounds, they are connected by a mutual love for gaming; Min-hyuk helps Bong-soon come to terms with her superhuman strength, while Bong-soon becomes someone he can count on, after years of troubled family connections and loneliness. 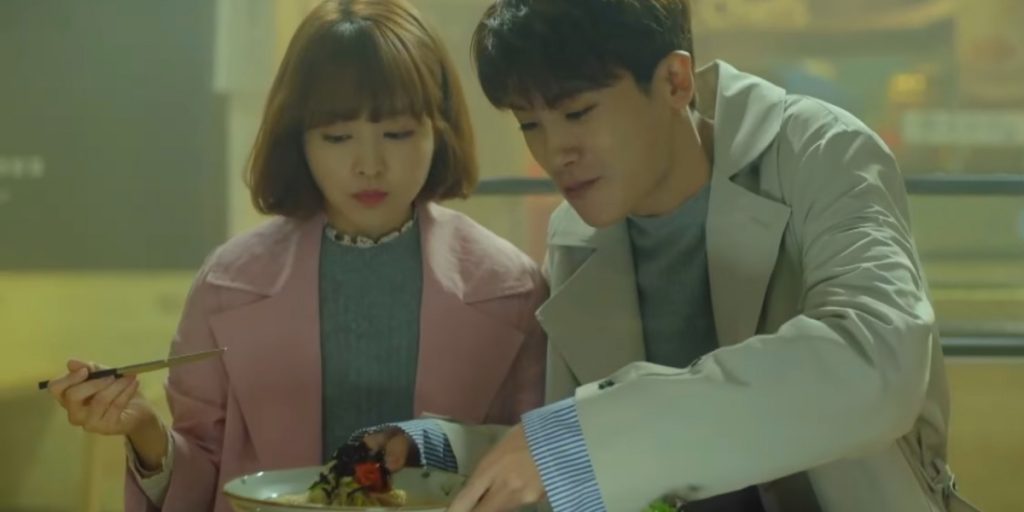 Yet the actual development of their relationship is polarising. Up until Episode 10, most of their interactions comprise of yo-yoing between extreme annoyance on Bong-soon’s part—due mainly to Min-hyuk delaying her transfer to the Strategy Department, even though he has good reason not to expedite the transfer because of her inexperience—and saccharine aegyo when he finally transfers her. This is supposed to produce a comic effect, which it initially does, but the effect wears out with too much repetition. This is paired with sudden swings to more introspective moments in which they stare into each other’s eyes, designed to make the viewer swoon. This effect is achieved (always, for some viewers, but for me, only sometimes), but the ebb and flow of their relationship often feels more contrived—to serve the tone—than organic.

I appreciate the basic setup of Bong-soon and Min-hyuk’s interactions and how honest they are with their own feelings, but the lengthy and at times contradictory scenes surface the shallowness of the writing. The desire to achieve certain effects—for example, to show how adorable they are—sometimes comes at the expense of character consistency. Sensing Bong-soon’s inability to articulate her feelings despite wearing them on her sleeve, Min-hyuk gently nudges her towards accepting him. But this runs at odds with scenes like him grabbing her hand in the lobby or hugging her in the cafeteria before the eyes of other Ainsoft employees. Even if Bong-soon’s feelings for him are evident to him, she is clearly still hesitant about their relationship and public displays of affection; it doesn’t seem in line with Min-hyuk’s consideration towards her in other moments. 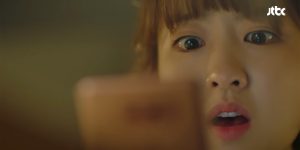 And when Episode 12 comes along, the looming thought of Gyeong-shim’s (and the other victims’) predicament makes the cute moments between the couple jarring to sit through. I’ve seen dramas that were able to better integrate romantic development with a crime thriller plot (such as I Hear Your Voice); Strong Woman is not one of them.

As disjointed or lacking as Bong-soon’s and Min-hyuk’s relationship may be, many viewers still lap it up, but the show really owes it to lucking out on the casting rather than to screenwriting or directorial merit. Given the show’s multiple weaknesses and its tendency to prioritise tone over content, yet still remain unable to deliver the tone convincingly and skillfully, it’s not hard to see that it’s mainly Hyungsik and Park Bo-young‘s chemistry and acting chops that are carrying the show. But good acting and excellent chemistry can only go so far on insufficient material. It remains to be seen if the final four episodes will step up plot-wise, but I’m not really holding out hope.