Seohyun is Decidedly Devious in "Don't Say No" 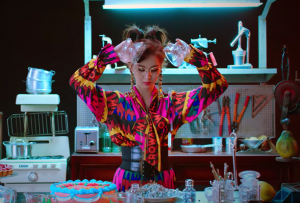 It was only a matter of time before SNSD‘s youngest, Seohyun debuted as a soloist. Following the lead of fellow TTS members, Taeyeon and Tiffany, Seohyun hits the scene as a soloist with an image that is surprising to some, and expected for others. Gone is SNSD’s maknae of innocence and sweet smiles. Instead, we’ve been gifted a mature Seohyun who plots, frowns, and even murders.

As Seohyun discussed in her comeback showcase, SM originally wanted to promote her with the image of innocence and a guitar — a concept that would fall right in line with the book worm innocence they’ve been marketing her for since SNSD’s debut. The actual direction the solo ended up taking is admirable, as it is seemingly more true to the kind of music Seohyun wants to put her voice behind. She’s a twenty five year old woman, who has every right to break away from the piano playing, studious, and poised image SM has been pushing on her for the better part of a decade.

Seohyun takes to the screen for “Don’t Say No” with all the fury of a woman scorned. She’s devious nearly to the point of being catatonic as she watches her lover in the rear view mirror, stares forlornly at her empty bed, and ultimately plots her lover’s murder.

At times, the images on screen take a clear play from Red Velvet’s “Russian Roulette”  — screws for dinner, robotic stares. Only, instead of a clear aesthetic direction which “Russian Roulette” mastered, the fashion and sets of “Don’t Say No” are all over the place. One minute Seohyun is bedazzled and glamorous with victory rolls in her hair, the next she sports full blown 80’s retro, then she’s sitting on the hood of a car in an evening gown.

It’s a lot of visuals to take in three minutes, and even more tasking when the choreo shots with Holler era leotards are thrown into the mix. Because it’s SM, it all still looks good, but that doesn’t inherantly make it cohesive my any means. Regardless of the visual overload, I can’t deny that the release is pleasing in the way that it is standard SM fare: trendy clothes, well constructed sets, good camera work. Even more impressive, not only did SM let Seohyun out of her image box, but they also gave her a full MV — with plot!

Initially, the plot of “Don’t Say No” reminded me of Younha‘s “Get It” with its use of the domestic space for revenge — Seohyun schemes in the kitchen, loiters on a refrigerator, and has a cold stare down with her former lover over plates of chain metal and screws. The gothic sets aid the foreboding tone of the MV, and it’s not necessarily a surprise that at the end of the MV we see the lover dead, facedown in his plate.

The lyrical content of “Just Say No,” however, isn’t nearly as assertive as the MV suggests — and in many ways make it the foil to “Get It.” Instead of asking her lover to beg for mercy, Seohyun is the one pleading for her lover to return. She’s been abandoned, subsequently has changed her ways, and is ready for him to come back.

I wanna show you how much I changed
But why baby
Why are you putting on a face I don’t know?
I don’t like that

Let’s go back to the good times, please
It’s a favor from me, who you loved so much

The lyrics point to the largest discrepancy of the release: it feels like I’m listening to one story, while watching a completely different narrative on screen — there’s a lot of mixed messages and it’s hard to tell if they’re intentional or simply careless.

Is the gothic tragedy on screen a play on ‘if I can’t have you, then no one else can’? Or is the death of her lover in the domestic space a larger metaphor for the failures of their relationship? Perhaps, the lyrics are ironic: Seohyun only begging for her lover to return as a way of destroying him — but that dark tone doesn’t fit with the mood of the track itself. Seohyun sings far too sweetly for the track to feel foreboding, the instrumentals are too upbeat. There was potential in this concept, a glamorous funeral styling a la Carrie Underwood‘s “Two Black Cadillacs” with a twist that Seohyun was the murderess all along. Unfortunately, when it came to execution of said plot, SM once again proved that they have more aesthetic inclinations than narrative intuition.

Ultimately, the shortcomings of “Don’t Say No” are not Seohyun’s fault — both in terms of MV and the track itself. Seohyun tackled this concept with a vocal maturity and convincing visuals that should be applauded. Yet, it feels that SM went for a big budget look and sound, without actually investing the time and energy into really making the most of the release. Thankfully, the mini album comes through with concept and cohesion in a way the MV failed to demonstrate.

As neutral as I am to the title track, Don’t Say No definitely deserves a listen. Listening to full album brings light to the lead single, with “Don’t Say No” acting as the neutral ground of the album. Musically, “Don’t Say No” is a perfectly decent debut track, if not an expected, conventional bop. The Ariana Grande influences of the title track are clear throughout the whole album, but Seohyun tackles each track with mature vocals that make you forget that this is the first album she is carrying completely on her own.

Don’t Say No is decidedly mature, and a calculated growth for Seohyun. With Don’t Say No, Seohyun makes a statement; one that wraps up unapologetic sexiness with young love. As the album progresses, we hear Seohyun explore a full range of feminine images: Dangerous Woman style sultriness in “Magic” and “Bad Love,” and sweeter tones in “Hello” (Feat. Eric Nam) and “Love & Affection.” With confusing visuals removed from the picture, it’s easy to admire Seohyun’s vocal abilities. 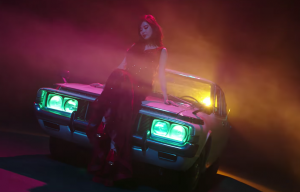 Seohyun has perhaps the second most dynamic voice in SNSD, following Taeyeon, and the album speaks to that strength. She showcases her full range in tracks like “Lonely Love” and “Moonlight” with sultry lows in the verses, and delicate highs in the chorus. “Bad Love” is perhaps the most impressive track in terms of vocals; Seohyun’s voice dips into raspier tones at just the right moments, and then builds to an impressive crescendo in the bridge that doesn’t feel too intense or out of place. It’d be easy to over-sing any of these tracks, but instead of showing off, Seohyun allows her natural musicality to carry the tone of the tracks. She understands how to shape her voice around a song, and in so doing, she demonstrates her vocal and musical competency.

There’s a breadth of maturity that is commendable in Don’t Say No, especially when the mini presents a versatile image that doesn’t box Seohyun into just sexy or sweet. SM has given her reasonably quality material to work with — despite the debut not necessarily falling in line with the concept they wanted to pursue with Seohyun. Even more impressive, Seohyun has done a truly admirable job with the material, allowing us to see her growth.

Seohyun has more than proven herself a competent soloist with Don’t Say No, I just wish the debut track and MV could showcase her range in a more cohesive way.